Returning to Hikaru Nakamura's adventures in J'adoube, I wonder if followers of other sports than chess might find it strange that an incident of this magnitude didn't end up in front of some kind of disciplinary panel.

Yes of course, Nakamura was fined a portion of his winnings, but not for inviting Lev Aronian to believe the unbelievable: he was fined for not turning up to the post-game "press conference". Ironic: a competitor is therefore fined, not for the offence as such but for not turning up to answer questions about it, at a press conference that is not actually in any recognisable sense a press conference and at which in all likelikhood, no difficult questions would have been asked.

This is ironic, but it's also, perhaps, a little bit stupid.

Why would this be the case in a major international chess tournament, but not in,say, a major international football tournament? There's nothing unusual, as far as I can see, in the regulations for the Candidates Tournament (at least as far as disciplinary measures are concerned) compared to other international tournaments, albeit the fee, five hundred euros, is a bit higher than you or I would have to put up. There's an Appeals Committee and it has to receive protests in writing within two hours of the incident complained of, or the end of the round during which it took place. 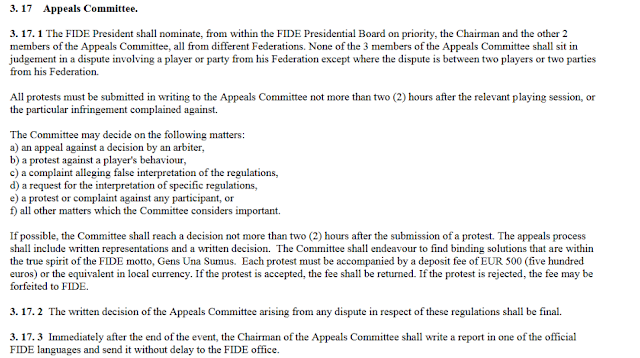 The part at (b), "a protest against a player's behaviour" would presumably be the relevant section here

so we can assume that the reason Nakamura did not have to explain himself before an Appeals Committee is that no such protest was received.

This is reasonable enough, on one level. On another level, it's completely unsatisfactory, since an apparent breach of chessboard ethics, a very serious one, took place in the most important tournament of the year, in front of the chess world, recorded by the cameras - and yet the individual responsible has not been required formally to account for his actions.

As I say above, I assume that this was because no protest was received. There is, I note, no actual statement within the regulations to say who may or may not submit a protest to the Appeals Committee (could Ilya Merenzon? could I? could anybody?) but the normal procedure in chess, and hence one arguably implicit in the rules, would be for another competitor, or their team, to make a protest. In this instance this would mean Lev Aronian, Nakamura's opponent during the game. But as Aronian won, then there was no particular reason for him, personally, to make a protest.

If you find that satisfactory, that's up to you. I don't, because it means that nobody, on any official level, has made any ruling about the matter, which means in turn that there is no precedent when and if it occurs again. I also don't because one result of that was that Nakamura is free to act as if nothing had happened - "it's no big deal" - and to blame Aronian for his reaction.


although there's some middle ground between panicking and cheating, and it consists of what we do when we panic. (Most players, for instance, including juniors, beginners and what you will, don't resort to J'adoube when they're in trouble.) Moreover, as Yermolinsky observes (1:08:30, but maybe kick off a few minutes or so earlier)


and he's a gamer who has form for trangressing the rules at moments of high tension. It's unlikely that he will get out of that habit, as it were, unaided.

Anyway, point I'm making is that Nakamura should have been explaining his actions, and explaining that he wasn't cheating, to an official committee. (So should Carlsen.) In football, this would happen because the player had been sent off or booked by the referee, or because the ref had mentioned an incident in his or her report. In chess, if I am correct in my understanding, that doesn't apply, not in the same way, and the equivalent official, the Chief Arbiter, only makes a written report at the end of the event.

This, in my view, is why Nakamura was able to swan around a couple of days after the J'adoube incident, insisting that nothing of much significance had happened, claiming that if anybody had been wronged it was him, and generally bringing the game into disrepute.

It's not true, to be fair, that Nakamura hasn't lost out at all by the failure to hold him to proper account for his breach of the rules. I imagine, for instance, that he has suffered permanent damage to his reputation. Moreover he could still, presumably, on the arrival of the Chief Arbiter's report, be asked to answer to the FIDE Ethics Committee (as was, for instance, Nigel Short some years ago) on the grounds of a potential breach of the FIDE Code of Ethics

I'd like to see that happen. But more to the point, I would like to have seen it happen in Moscow, not least so that we could have been spared the small but very annoying farce that followed.

I understand that in most FIDE events, it's sensible that protests and appeals be made by the competitors, or not at all. But this isn't just any old event. It's the most important tournament of the year. As far as we, in the chess community, are concerned, it's a major sporting event. Perhaps we should conduct it, in this respect as in others, like other major sporting events.
Posted by ejh at 8:30 am

Possibly the arbiter could have taken action under Article 11.1 of the Laws of Chess:

“11.1 The players shall take no action that will bring the game of chess into disrepute.”

Available penalties are described in Article 12.9:

I don't know if this makes you feel better, but I think this event really has hurt Nakamura in reputation. I'm not an intense chess fan, but at some low level I've been rooting for him for awhile because he's American, also he has a rep of being a swashbuckler. Knowing that he cheats (a bit), that does make a difference! Not that Nakamura cares if I'm rooting for him, but still, it's something.

I'll have to see what Christian Hesse thinks of all this. . . .

No, it seems that the only ethical violation at the Candidates' is the Danailov/Topalov complaint against Azmai for being publicly intimate at the official hotel swimming pool with a woman who wasn't his wife. They (that is, Danailov) go to great pains to say that they don't care about his personal business, but then air this in great volume, and don't make it clear whether it was the public intimacy or the non-wifeness therein that is the main "violation" of FIDE ethics.

Any idea about this "probation" that Chessdom asserts? I didn't see it elsewhere.

"Following the certain issues that arose during the Candidates Tournament in Moscow, the FIDE Presidential Board has placed AGON under probation until the Congress in Baku.

If the review is positive, the first Grand Prix is expected to take place from 12-23 October 2016."

How curious. No idea.

Reading the FIDE-Agon contract, there doesn't seem to be any notion of "probation" (just Material Cause for Termination in 9.2), and everything centers around this "Interface" entity (1.3) rather than the Presidential Board. I didn't see anything in the PB resolutions about it, though the PB did (1PB-2016/17) approve Agon's proposal for the FIDE GP.

Is this just a Russian messing up the article "the" instead of "a"? Or?

One line below, their grammar again misses a word ("of"?): "Agon Limited is the official partner of the World Chess Federation (FIDE) and owner the World Chess brand..."