This video turned up on YouTube this past weekend, specially recommended for me by a hand-picked team of algorithms. It obviously isn't new, not just in the sense that it's originally from 1994 but that it's been on YouTube for long enough to have more than a million views. Well, I never said I was in touch.


As you can see, its from a blitz tournament in New York and it's the semi-final, between Ilya Smirin and Viswanathan Anand, which has come down to the Armageddon game. No increments (besides, it was from the days before increments) and so while Smirin had the White pieces and six minutes on the clock, Anand, with the Black pieces, had only five. On the other hand Anand had odds of a draw.

In the end, Anand won the game, easily and smoothly. But it's not the action in the game that's of particular interest, but the inaction. Because for some reason, Anand - with only three hundred seconds to play the whole game - used more than a hundred of them in between playing his third move 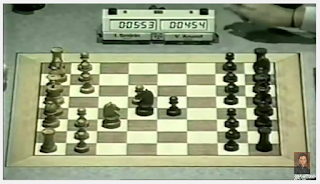 and deciding on his fourth. 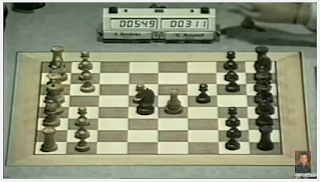 So what was all that about? 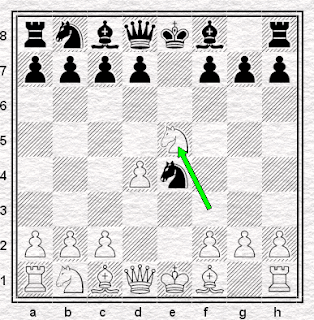 There's nothing wrong with the move, other than that it gives Black a wider choice of replies than would otherwise be the case, but on the other hand it doesn't really give White anything that can't be had from playing the more normal 4. Bd3 d5 5. Nxe5, to which (after 4...d5 5. Bd3) you'd expect it to transpose. 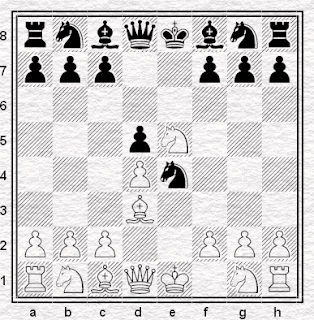 This is what happened in the game, eventually. The mystery of course is the "eventually", since it took Anand a minute and forty-three seconds to take that decision.

Back in 1994 Anand was already one of the world's leading players and no stranger to the Petroff, at a time when that opening was more fashionable than it is today. Strange enough that Anand should be surprised in the opening as early as move four: almost beyond belief that it should take close to two minutes for him to decide what to do. 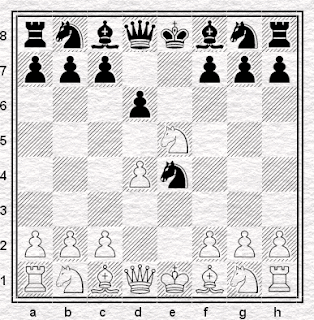 Or maybe he didn't. I suppose for instance it's just possible that Anand thought he saw some ghosts, and started to worry about 5. Nxf7. 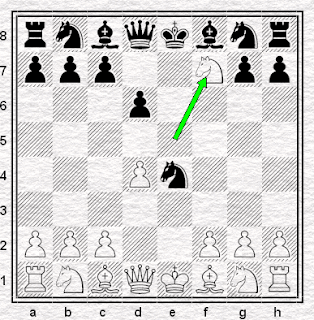 After 3. Nxe5 d6 there's a line with 4. Nxf7 - the Cochrane Gambit - which was playable enough for Topalov to draw with it against Kramnik a few years later. In this version, though, the sacrifice isn't quite so playable, and I'll leave it to readers to work out why. (Or they could look it up in Forintos and Haag's 1983 Batsford book, which is what I did. I wonder if Anand had a copy?) 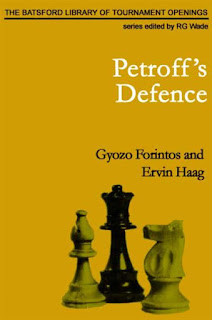 Personally I think a player of Anand's class ought to see the refutation in less than three seconds, let alone a hundred and three. Besides, if he decided he didn't like 4...d6 he could simpy have opted for 4...d5 taking him back into a line he must surely have been prepared to play.

I say surely - I suppose it's also just possible that Anand hadn't in fact intended to play 4...d5 in reply to 4. Bd3 but was going to essay Murey's remarkable 4...Nc6 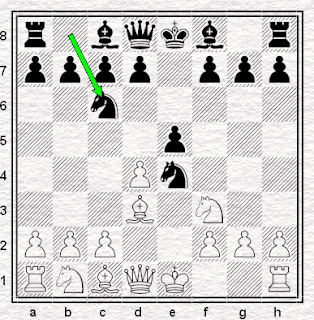 which had been seen for the first time just the previous year. Hence, perhaps, the would-be-surpriser was surprised: and having been on the wrong end of a Petroff disaster in his time, he wanted to avoid any more surprises, and was willing to spend a third of his clock allocation on making sure he didn't.

Maybe he didn't really rate Smirin, as long as he wasn't caught out in the opening, and thought three minutes would be enough to beat him. If he did think that, he was certainly vindicated by events.

I don't think I believe that version either. So why? You'd have thought that in the twenty-two years since, Anand might have been asked about his reason for playing so eccentrically, and for all I know he has been. Come to that, for all I know the only person reading this blog who doesn't know what Anand was doing is the person who wrote it.

But it's a funny thing: in all the various online sources I looked at when writing this, nobody cold produce any explanation that seemed to come from Anand himself.

So has nobody ever asked him? If they did, what did he say?
Posted by ejh at 8:30 am