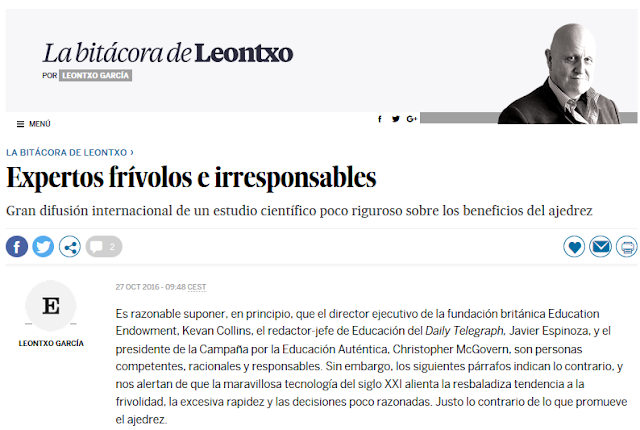 Anyway, for whatever reason, Leontxo has got round to damning the study, which to his dismay, and unlike some previous studies, does not report that learning chess in schools furthers the academic development of pupils. As I say, he damns not only the study, but the reporting of the study and for that matter comments made on the study by Chris McGovern and by Kevan Collins - the latter being head of the EEF - which appear in the Telegraph piece.

Among other things, he says of Collins and his study

his foundation should never have designed the study with such an absence of rigour - it should have suspended it, or altered it, on seeing how it was turning out and never should have published it, on the grounds of its complete lack of credibility.

He also suggests that

It all suggests that neither Espinoza [author of the Telegraph piece - ejh] nor McGovern play chess (or at least not very often). If they did, they would think more before speaking or writing

thinking is not in fashion.

You get the gist. I'm not sure I want to go through the whole piece (readers who have Spanish can of course go through it themselves) and I'm certainly not going to do it today, but you'll have gathered that it's an extended attack on the credibility of the study and its authors as well as on the newspaper article that reported it, and that among Sr García's accusations are "falta de rigor" and "falta de credibilidad".

Uh huh. Personally I have no problem with the study, but I imagine its authors can stand up for themselves and readers would perhaps be best advised to look at the study, as well as Richard James' commentary and any other discussion on the matter that they find informative, and make their own judgement. But just for today, I wonder what Leontxo García means by rigour and credibility and the lack ("falta") thereof. Let us use, as examples, the journalistic output of Leontxo García.

Just to refresh our memories:

Quite a record, eh? So I wonder - can there be a less suitable person to talk about scientific studies and their credibility than this joker?

Falta de rigor, thy name is Leontxo García.
Posted by ejh at 8:30 am

Garcia is rather late to the party. GM Rogers was also not impressed with some parts of the study in a Chess.com article three months ago.
https://www.chess.com/article/view/school-chess-fails-pr-test

I'm OK with Ian's piece, but the thing is that (as Ian clearly recognises) the CSC progam is what it is, not an idealised one where kids get hundreds of hours of chess tuition from class teachers who have been trained in teaching maths with chess. (The UK doesn't have those courses and it doesn't have those teachers.) So the study looked at what actually happens in practice and evaluated it at a distance, i.e. late enough for any temporary effects to wear off.

Hence if anybody wants to criticise the program, they can do that, but to cticise the study itself for lacking credibility and rigour is, to put it mildly, unfair. Rather bigger problems could be found with previos studies, like the "self-selecting" nature of the groups studied, which Ian Rogers mentions but curiously enough, Leontxo García does not.

All that said, my major problem with the El País piece isn't what it says (I don't agree with it, but any robust study should be able to stand up to robust criticism) but the extraordinary spectacle of García attacking the study when García himself is somebody who invents facts and figures, who claims that studies and reports contain information which they don't, and so on. It's a lousy piece of bad-faith writing.

And more crazy ideas: Mr Merenzon said he hoped to gain 500,000 online subscribers for the livestream of the championship, suggesting that the aim was realistic given that many millions already follow tournaments on chess fan sites. But he also admitted that only a few thousand had paid so far.

Merenzon also touches on the post subject: countries such as Mexico and Spain that have implemented chess programmes in schools to boost maths performance.

Alternatively, they "could be" worth essentially nil (or 1 pound, as Paulson might accept).

I recall reading somewhere, likely an Agon source, that it was costing $6m to put on the upcoming World Championship match. If true, this would presumably need to be at least matched by income, much of it coming from sponsorship.

Do Agon file an annual Profit and Loss statement in their country of registration? You might also ask, who are their backers and will they, after the World Championship match and, if they happen, the losses of multiple copyright legal cases, be a viable going concern?

Funny you should mention that piece, it's scheduled for tomorrow...

Agon got $2m over 6(?) years until 2020 from NRK supposedly, and indeed they've claimed the cost of WCC is $6m, with "about half" paid by the sponsors (both these appear in the FT piece). Merenzon had said there would be more sponsors announced 3 weeks before the event, but the big 2 are still just PhosAgro and EG Capital (the webpage also lists Isklar).

Only place I can see $10m in revenues coming from is Kirsan's oil deals (according to Nigel)... They still seem to have zero plans for the Grand Prix, but I do realize that the WCC has to be Job #1. And likely Job #2, Job #3 all the way down for some time. It's that important to their future.

The piece is rather negative toward Agon, so my guess is that this isn't part of an annual thing where they'd presumably be in pay-for-print mode (like an ersatz advertising section).

Agon starts to pay its annual 500000 euros to FIDE for 2016, due on March 31. We shall see how demanding FIDE is over the matter. Both of them could be having serious cashflow problems by then.

I didn't realize it, but there's another company called Agon Limited in the UK:
https://en.datocapital.com/uk/companies/Agon-Ltd.html

But here's the one you ask for (no idea what you'll find in an Annual Return):

I think Jersey is sufficiently opaque that the ultimate beneficiary need not be listed in registration documents.

The publicly available documents of the Jersey Agon were scrutinised at the time when the claim was made that Kirsan was a part owner. Nothing was found, but insights into income and revenue were equally unrewarding.