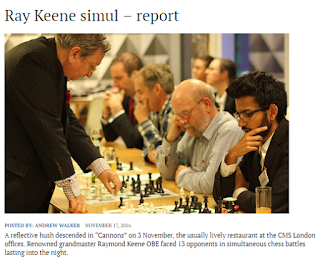 is "renowned" in English chess circles for a number of unsavoury reasons, and one of them is - as I mentioned last time this occurred -

As I also wrote:

Ray Keene has never made any proper explanation of his actions. Nor has he returned the money.

I'm all in favour of giving money and publicity to the Multiple Sclerosis Society. Suppose we offer to donate the missing money to that very same charity whenever Ray gets round to coughing up?

And until that time arrives, suppose we tell the renowned plagiarist and spiv that he can get stuffed?
Posted by ejh at 8:30 am