As we've seen this week, Ray plagiarised all his Times columns from Monday 24 October to Friday 28 October from the first volume of My Great Predecessors (Garry Kasparov, Everyman 2003). So if you assumed he did the same on Saturday 29 October, you assume correctly, though it's not as thoroughgoing a robbery as the others. Here's how he introduced it. 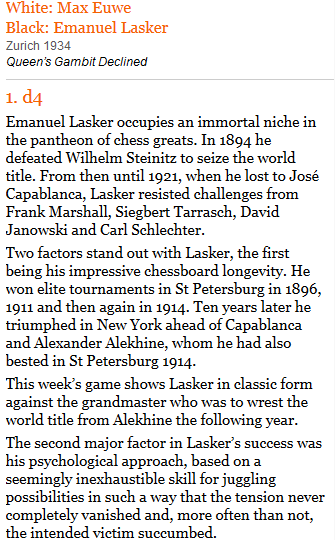 However in this instance the annotations in My Great Predecessors don't actually kick off until just before Black's thirty-fourth move, so we'll join him there. (Whether the annotations prior to that are original - who knows.)

Here's how that appears on page 223 of My Great Predecessors.

Anticipated is the word.

but after that there's nothing really for us to look at.

Except maybe this, which made me laugh. 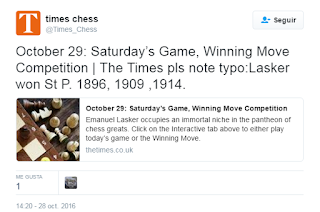 You know how Ray likes to get things right. But do you really think Ray communicates with the Times throug hthe medium of Twitter?

Anyway, that was the week that was. Enjoy the weekend. Don't do anything Ray wouldn't do.

Does this mean that Ray ghostwrote My Great Predecessors? I assume that if Kasparov actually wrote that material himself, someone would've alerted him (Kasparov) to the plagiarism and he would've sent a cease-and-desist.

Not that there's anything wrong with ghostwriting, but if Ray really wrote this material it's surprising to me that it's such a secret, for example it's not on the Wikipedia page for that book.

No, of course he didn't ghostwrite it - and of course if he had, it wouldn't be a secret. Why Kasparov never took action against Ray - well, who knows, and he's not saying, but I can think of all kinds of reasons, including the fact that not everything in My Great Predecessors was as well-attributed as it might have been.