Bored by the Xmas movies?

Why not watch a bunch of foreign-language chess films instead?

There's a chess bookshop, La Casa Del Ajedrez, in Madrid, I've never been there myself, but they send me emails, which is how I know that, as part of their twentieth anniversary celebrations, they're showing a series of chess films over Xmas.

On first looking at the list of films I thought I hadn't heard of any of them - which, given that most chess-related films are terrible, might not be to my disadvantage. In truth, having scratched my head a little harder, I can maybe vaguely remember one or two of them, though that would be "remember" as in having heard of them, not as in going so far as to watch them. But if and when you're bored by the Xmas movies, then most of them are embedded in this blog post. So you don't have to go all the way to Madrid 28004 to see them.

(Before I start, I haven't got, and haven't seen, Bob Basalla's Chess In The Movies, currently eight hundred nicker on Amazon, so if anybody's got it, or got eight hundred quid they want to give away, I'd be keen to hear what it says about any of these films.)

Their first movie in the series is Schachnovelle, from the novel by Stefan Zweig, which in the UK was released as Brainwashed. 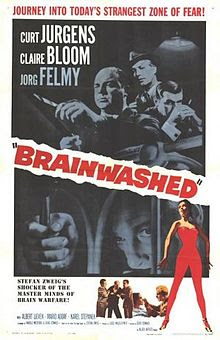 Amusingly the poster for the UK release makes no apparent reference to chess, except for the phrase MASTER MINDS OF BRAIN WARFARE! which sounds like the sort of thing Ray would say. Mind you, he was still at school at the time - becoming fluent in German, as I recall, which would make it easier to follow the film, which is on YouTube only in the original.


However, you can have a four-minute taster with English subtitles, in which Alan Gifford, despite claiming to be a chessplayer, struggles to identify a name he is given as that of the world chess champion.


Claire Bloom is in it, though not, as far as I could see, in the clip and so is Curd (Curt) Jürgens. 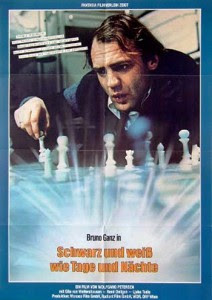 There's no hiding or disguising chess in the German poster, or in the US one. (I'm not aware that the film has ever had a UK release). 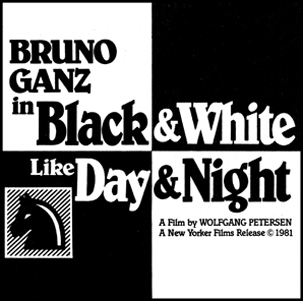 The director was Wolfgang Petersen, who went on to make the fantastic Das Boot and then a number of forgettable films in Hollywood. His star, Bruno Ganz, having learned from his experience of playing an obsessive sociopath, went on to be the star of a million YouTube Hitler parodies. According to this review, his performance turns our film into "a riveting psychological drama".

The YouTube video doesn't allow embedding but you can see it here, in German with Spanish subtitles, the largest I've ever seen.

Did you know that a film about chess once won the Oscar for Best Foreign Language Film? You probably did, and maybe I did back in 1984, when Dangerous Moves picked up the statuette. 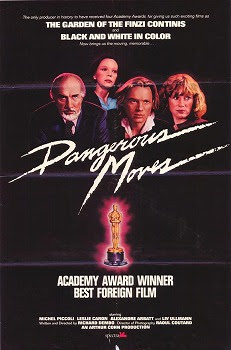 There it is on the poster, though once again no actual chess pieces are shown lest - perfectly reasonably, may I add - they should put anybody off. As I don't recall coming across the movie at any point in the thirty-two years since, I have to assume that this subterfuge was not enough to induce anybody to come through the doors to watch it. It's even missing from Liv Ullmann's Wikipedia filmography.

You can see it on YouTube, though, in French. Apparently world championship matches are played on something like a coffee table.


I don't think La Partie D'Échecs has ever been seen in Britain either, and British viewers won't be seeing it right now, since I can't locate the film on the internet. 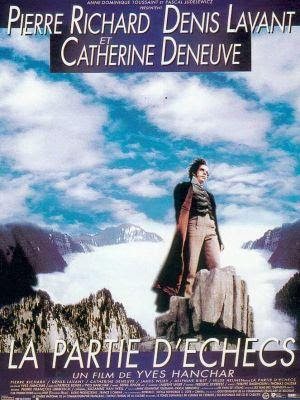 It stars Catherine Deneuve, no less and one of the characters is a famous mid-nineteenth century chess player called "Lord Staunton". Who knew? 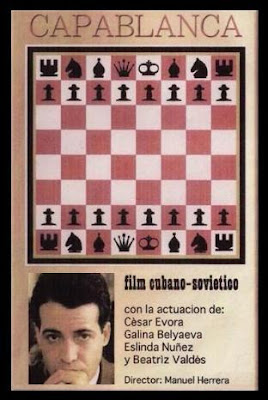 is on YouTube in Spanish but nowhere to be found on Wikipedia, not even in that same language.


From Capablanca to Alekhine. Belyy sneg Rossii or White Snow of Russia 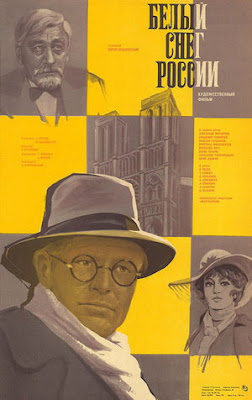 is a biopic of the Russian world champion, apparently scripted by Alexander Kotov from his novel. 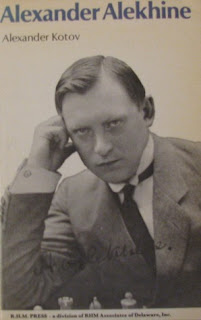 of which I have a copy, but apparently there was such a novel, of which I do not.

As with all the other films in this piece, I haven't gone as far as watching White Snow of Russia, not yet anyway, but Sarah Hurst has, and wrote about it for Kingpin. 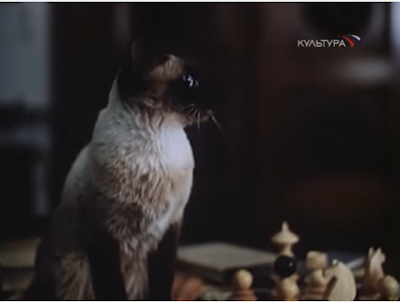 I saw one of these movies when the NFT at London SouthBank showed a series of chess movies during the Phillips & Drew Kings Chess Tournament was taking place at County Hall in 1982. It was the one titled SCHWARZ UND WEISS WIE TAGE UND NACHTE which was translated to English, 'Black and White Like Night and Day", in the programme where it is described, by Stewart Reuben, as "a fine study of paranoia using recent World Championship matches as its model, descending only briefly, gratuitously, to unnecessary violence. There is a jaw-dropping scene, where the protagonist grandmaster confronts his wife with a load of plastic bags containing the food she had been serving him and accuses her of trying to poison him before becoming violent.
I saw four other films at the festival: 'The White Snows of Russia' - an account of the life of Alexander Alekine; 'The Chess Player' - a 1927 French silent movie, 'Chess Fever' and 'Return From The Ashes'. Others shown were: 'The Seventh Seal','Sadko', 'Rondo', and 'The Chess Players'.

... which is also listed here!

Thanks for these. The Dark Horse (2014) is an excellent NZ film based on a true story, about a chess player/coach with a lot of inner (and outer) demons, trying to get a kids' chess club together and playing in competition. Totally un-Hollywoody and very highly recommended. I hadn't seen a good chess-related movie before.

thank you very much!! one question: does anybody know where i can i find english subtitles of White snow of Russia?

I'm afraid I have no idea!