The Bird Has Landed


Weighing-in at around 1.7 kg, with a hefty price tag to match (about £35 a kilo), this is more than a mere stocking filler. It's the big one in Santa's sack: Hans Renette's monumental biography of Henry Edward Bird (1829-1908). 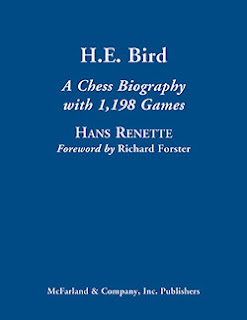 This is certainly no turkey: offering almost 600 pages, more games than you ever imagined possible, nine problems, and five appendices... and no less than five indexes (opponents, annotators, openings by name, openings by ECO, general). Hans doesn't stint on quantity. Nor quality: it is a wonderfully thorough and comprehensive account of his subject's life on and off the chess board, with a good bit of contextual Victorian chess history besides.


The material warrants, and gets, the usual high-class production job by McFarland, with clear text and a generous helping of photographs (including the one above on page 226) of Bird and his opponents culled from the chess press and columns of yesteryear. It is organised into twelve chapters covering the phases of Bird's life and chess career; these are further edited into bite-size pieces, each under a helpful (and often witty) heading, and interleaved with the relevant games - usually recorded by others as generally Bird himself didn't bother - from tournaments, simuls, and clubs, and the Divan of course; serious, skittles, off-hand, odds, and consultation: all are included. Yes, there's nearly 1,200 of them.

As this impressive work explains, Bird came to the game late by today's standards, at the ripe old age of 15 - in 1844. He played his last tournament in 1899 - as his persistent gout took its toll. He had devoted the greater part of his life to chess - though he was not destined to find there his royal road to riches, nor did he in his other professional diversion: accountancy. Bird was sustained in his last years by the generosity of others (an annuity funded by his chess friends lead by the excellent Dr. Robert Dunstan, once of Brixton Chess Club¹), and left just over £35 (perhaps about £3,500 now) behind him (p. 553).

As for the man, his personality and character, and his views on chess matters, Hans Renette gives us a vivid picture, drawn - with dogged tenacity - from contemporaneous sources. Bird seems to have been a proper gentleman at the board, but away from it the word "cantankerous" springs to mind. Bird was obviously an Englishman of his time, and seemed unable to leave these shores (he had expeditions to America and the Continent, etc) without some kind of controversy befalling him.

Whatever Bird's eccentricities and foibles there is no doubting his devotion to the game, though - as the author explains - he was not one for the scientific approach of Steinitz et al, nor was he enamoured of the discipline of the clock. Though he could do things positionally if needs must, he preferred combinations, delivered à tempo, where his tactical skill might extricate him from a tight corner or, in an excess of romantic spirit, cook his goose. Even if not quite in the top flight, he was no light-weight and could make a good fist of it against the heaviest hitters of his day. The book's introduction itemises Bird's finest efforts, against Mason in New York 1876 as his "immortal game": a slow-cooking queen sacrifice - it is online here.

Bird lived - latterly anyway - a short walk away from chez moi in Balham and then Tooting Bec (or Upper Tooting as they sometimes call it, to make it sound posh). He ended his days in Chetwode Road, near the tube station (this came later - obviously), renting rooms upstairs, which must have been a terrible trial, what with his gout etc. At 78 he was laid to rest in Streatham Cemetery, the nearest to hand (p 553).

For that last detail I am mightily grateful to Hans, having myself committed a grave faux pas when blogging, a few years back, that the Bird was buried in Gap Road Cemetery, a mile west over Wimbledon way (and I have been wondering ever since what was the right answer). On reading Hans's reference I popped along to see if there was any sign of H.E.B at ground level. The Cemetery's record is clear enough: he was buried on 16th April 1908 in plot 247 in Block G, though no-one had joined him therein: Mrs Bird had long since pre-deceased him in 1868, interred in Kensal Green cemetery (p. 91); sadly Eliza seems lost to history, and features little in the story.

By comparison with other parts of the cemetery, in Section G headstones etc are rather thin on the ground...

...and there is no memorial anywhere of his burial. There was not to be, alas, a Blackburne moment.

H.E. Bird, the Biog, will be sure to delight footnote fetishists. The volume offers generous helpings: it is a veritable feast of footnotes, some of them as toothsome as the main text, which they season with quotes from the press of the day. One such (p 538), references the Lady's Pictorial of 10 April 1897 and delivers the bonbon that Bird played a 15-board simul against the Ladies Chess Club where he lost three games - one of them to a lady to whom we have taken a particular shine in Lost on Time: Mrs Louisa Fagan. Delicious.

Students of the history of Streatham and Brixton CC - an increasing number, surely, as we approach our 150th birthday in 2021 - will also be pleased to learn from page 496 that H.E.B. played a simul against 16 of its members in 1893 (+11, =2 [incl. Dr Dunstan], - 3). Going back even further I spotted the now forgotten V. C. Peyer (a "Knight Class" player) winning the "early losers" section of the City of London CC Handicap Tournament October 1874/March 1875 (p 158). He was the youngest of the three Peyer brothers who were the energetic force behind the nascent Brixton CC in the early 1870s: yet another detail of particular interest to chessers down here in London SW.

Bird is of course still remembered for his opening innovations, principally 1. f4 (unavoidable on today's club circuit) which bears his name, but also (and less commonly) that 3...Nd4 in the Spanish, especially with an early ...h5 against almost anything. There's also the Lesser Bishop's in the King's Gambit, and various other off-beat lines. He also championed the Dutch (or should that be: The Drib²).

3...Nd4 perplexed many then, as it does now; but has had its supporters. Your Blogger played it for a bit in rapidplays many moons ago, and good fun it was, too: black's doubled 'd' pawns turning out to be quite potent (well...sometimes). Tim Harding refers to the defence in his Bird chapter in Eminent Victorian Chess Players (2012) as Bird's "most idiosyncratic opening novelty [which] generally assures Black a fair share of the center (sic) squares while the Lopez bishop is left stranded on b5 and must be regrouped." Tim actually let 3...Nd4 out of the cage a few times in 2010/11 in some heroic experimental games of his own "to obtain a better feel for [Bird's] approach to chess" - a splendid example of the participant observation method applied chess historical research (next up: a full costume re-enactment of the Bird-Mason game?). Tim lived to tell the tale, just, and - though not winning any games with it - wrote about his experiences in his erstwhile Kibitzer column on ChessCafe.com: "Misadventures in the Aviary".

G.M. Ivan Sokolov opined in 2009 that 3...Nd4 is "a strategically very complicated line offering Black active play" and adds that "it has been played in a regular basis by world famous players like Spassky, Ivanchuk, Morozevich, to name just a few." (Ah, so, we were in good company...) In EVCPs Tim says that Bird must have played hundreds of games with it, but "unfortunately only a small fraction are preserved for posterity." However, as the fruit of his diligence, Hans gives us the scores of 54 (!) of them. For what it is worth: Bird's results in these games, with his own defence remember, were + 19, = 9, - 26. Not encouraging.

A Bird in the Hans

Mention of Tim Harding's chapter on Bird in his magnificent EVCPs naturally invites a comparison between his and Hans Renette's accounts of Bird's life and games. But it would be invidious of me - not to say presumptuous - to prefer one over the other (and I don't say that because of generous references to the late Streatham and Brixton Chess Blog by both authors*, or even the nice inclusion by Hans of your blogger in his list of acknowledgements - thanks both!). The two works are of different lengths, and they weight their accounts accordingly. I have the impression that they mutually reinforce each other. They deserve to be read together when you could enjoy the authors' respective ruminations on whether Bird was in some respects a Nimzowitschian avant la lettre (Harding) or the last post of C19th romanticism (Renette).

In the project of recovering, and making sense of, Victorian chess history we are brilliantly served: Forster on Burn, Harding on Blackburne and the other EVCPs, and now - an extremely fine addition - Renette on Bird. Thanks to these remarkable chess historians it feels as if the Victorian era, when domestic chess came of age on the board and off, has now brought forth a golden period of chess historical biography. As for Bird himself, whatever we think of the man, his style of play, and his innovations in the openings, we should be grateful to him for his name and the dodgy jokes it inspires.

Footnotes
¹ Your blogger declares his interest in this neighbourhood of south-west London, home of one arm of the present day Streatham and Brixton Chess Club, of which he is a member.
² The Bird Reversed.

I have a fair number of links in an email file to pieces about 3...Nd4, acquired when I was looking for a way to play the Lopez for a win. I came to the conclusion that though it might be quite effective in this role, this was not becuse the winning chances were on Black's side.

IMHO, the book is beautifully produced and full of interesting material. The only drawback, which does grate somewhat, is the inelegant prose and clumsy sentence construction. That aside, highly recommended.