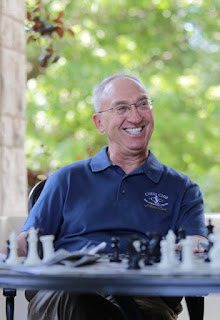 Maybe Garry Kasparov might have something to say on the subject: it is not as if the loudest political voice in chess (whose Twitter account, often denouncing Donald Trump, has been much-retweeted since the election) has no connection to the loudest pro-Trump voice in chess. 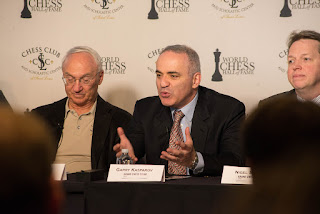 Garry with Sinquefield and some other guy (Austin Fuller)

Now given how much Kasparov has to say about the business and political connections of people who are opposed to him in FIDE, I wonder whether he will have something to say about people like Rex Sinquefield who are sponsors and supporters of another unsavoury and dubiously-elected President.

One hopes so. One hopes too that he will be asked about Sinquefield by the chess press. However in neither case is it possible to flavour one's hope with a great deal of expectation.

In truth I can think of no occasion when Garry Kasparov has faced a difficult interviewer. I'm not sure I can even recall him facing a difficult question. One consequence of this is that this manifestly contradictory man never has to account for any of his manifest contradictions.

"Why, Garry" - as he is never asked - "do you have such a taste for fantastically rich men with far-right politics that you seem not to notice?"

I mentioned Peter Thiel, PayPal founder and Trump enthusiast, above. Garry and Peter used to be best of friends. (Peter Thiel, who has fought for freedom of the press is, in retrospect, a particularly good line.) Here's Garry and Peter chatting away a few years ago.


In fact they were supposed to have a book coming out in 2012. It never happened, for reasons which are obscure to me. They would be less obscure if he said what they were. He might be more likely to say what they were if anybody asked him. If they have, it has eluded me. 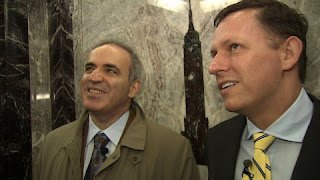 I've not heard anything about Thiel from Kasparov recently. Perhaps they fell out. Perhaps it was over politics.

But who knows, eh? Just one of many Kasparov alliances that have come with fanfare and then disappeared to virtual silence. That's how it goes with Garry. He's always benefitted from the combination of a credulous public and an insufficiently curious media.

And so of course has Donald Trump.

Sinquefield
Sinquefield and Short
Thiel
Posted by ejh at 8:00 am

You don't really expect American chess players to bite the hand that feeds them, do you? Kasparov was on the BBC's Hard Talk a few years ago (2015?). Faced with tougher questions than usual, he didn't perform very well. IMHO, of course.

I didn't know that. I'd have liked to have seen it.

Re: your rhetorical question - no, of course not, but I wish I did.