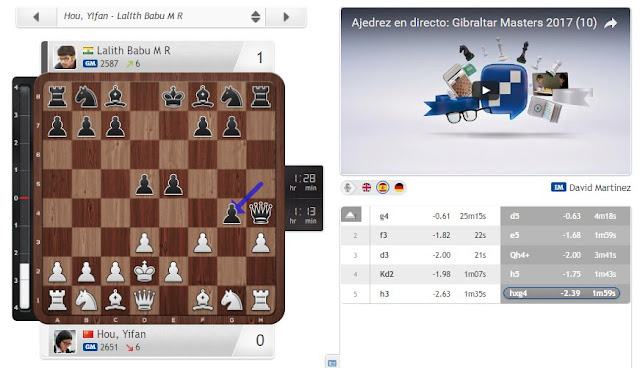 Much anguish and wagging of fingers at Hou Yifan's default-cum resignation in the last round at Gibraltar, and I can't say I'm all that impressed myself, not being hugely fond of players losing in that fashion. If you're going to default as a protest, perhaps it's better to formally default, since playing deliberately badly brings the game into disrepute.

More than that, if you're going to default as a protest, perhaps it's better to put out a formal statement explaining your actions, since it's hard to evaluate a protest when you don't know for sure what it's about.

So should she have done it? Very probably not. Should she have apologised to the organisers and arbiters, as she did to the fan? Very possibly. On the other hand, whataboutery is the spice of internet life, so I was wondering whether there had been any other incidents recently in which leading professionals had found themselves at loggerheads with organisers and arbiters.

Funnily enough this chap was the first who came to mind.

I'm impressed that Nigel's grasp of neurology is matched by his capacity to serve as an amateur psychiatrist, but then again Nigel excels in many fields, one of these being his capacity to pick fights with other people in chess, with arbiters no exception to this rule. And being Nigel, when he picks a fight he really picks a fight, his last effort involving both abuse and threats.

Now as it happens I don't recall Hou Yifan directing any abuse at the Gibraltar organisers, nor indeed issuing any threats.

It's also hard to remember too many calls from within the English chess community for Nigel to apologise for his behaviour.

I don't particularly want to speculate about the reasons why this might be. I'll just point out that that's how it is.

Come to that, since I'm no more of a shrink than he is, I don't particularly want to speculate about the reasons why Nigel behaves consistently like an abusive bully.