Herbert Jacobs: 15. Down the Line 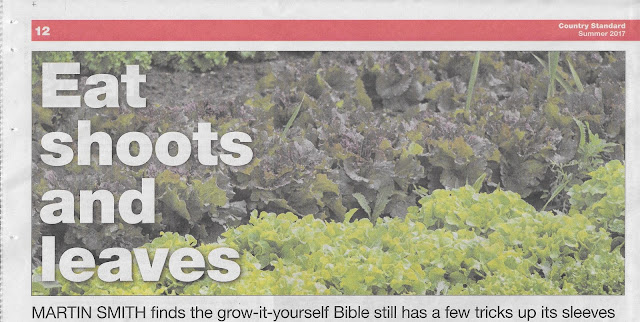 But what's this got to do with Herbert Jacobs?

Book review published in the summer 2017 edition of the Country Standard:

Beginning a review of a grow-it-yourself manual with the General Election of 1910 may be a case of “If you’re going there, I wouldn’t start from here”. But that was the year when Herbert Levi Jacobs stood in St Pancras East, and he will lead us eventually into The Salad Garden.

Herbert was one of the strongest chess players in the land, and seemingly out to disprove those stereotypes about compulsive chessers - your reviewer is also one - being disconnected from everyday life. In fact he campaigned for women’s suffrage and stood on a “votes for women!” platform – sadly scraping only 22 votes.

All the while he was playing in top-level chess tournaments.

When researching Jacobs for a chess history blog, I discovered that he was Joy Larkcom’s grandfather: the family name comes from his suffrage-supporting, concert-singing wife Agnes Larkcom, who insisted on retaining it after marriage, thus sending it on down the line: sound stock, bearing fruit two generations later in her granddaughter now celebrated for a her authoritative how-to-grow books.

With an allotment myself in London, here I am, with double pleasure, reviewing Joy’s latest publication. The Salad Garden is, above-all, a practical guide to organising your plot all-year round, and stocking it with familiar, and not-so-familiar, edibles.

The first thing that strikes you is the look: like one of her plots, the book is tightly packed, and a delight to behold. The print is clear on the page, with arresting, often diverting, photographs of individual specimens (though I’d have relished some more plot panoramas). The text is admirably thorough and no-nonsense, mixing nitty-gritty gardening advice with the detail of varieties, propagation, cultivation - together with some culinary counsel. Unlike the start of this review, it just gets on with it.

The author practices, and advocates, the potager style, where flowers interweave with salad (often ending up in the same bowl), and where leaf-colour and form are - with taste - woven into the tapestry, essential to the overall effect: the Larkcom salad garden is a feast for the eye, as well as the table.

“Garden” is well chosen, it implies a place of pleasure. That intermingling by design - Joy’s trademark - also serves a higher horticultural purpose: increase your productivity by interplanting the quick with the slow, and the pest-repellent with their favourite nibble. Arrangements in squares are recommended for accessibility and horticultural efficacy (a chess player nods with approval).

A surprise is what counts as salad on the Larkcom plot: not just the usual leaves, but stems, stalks, and roots. And flowers. But the most gob-smacking of all the “salads” à la Larkcom are the weeds. As an allotment blow-in myself (after 5-years on the waiting list and finding other arrivistes already installed), it is a relief to read a re-imagining of the old saw: that weeds are plants in the wrong place; and that they can be put right by dishing them up with all the rest. At the back of the book you’ll find some useful recipes for dressings, and salad mixes, some which judiciously re-purpose your wrong’uns.

Nevertheless, I was grateful for the warning (page 162) concerning a neglected weedy delicacy: ground elder (“a delightful angelica flavour”). It is illustrated on the facing page: “Do not confuse with the similar but poisonous dog’s mercury.” Alas, there is no helpful photo of the latter, so I’ll pass on the former. But I speak as a nervous city plotter. Genuine country-folk, of course, have been judiciously foraging wild plants since the cows came home: The Salad Garden helpfully domesticates the practice.

There is much in the book for the full-on allotmenteer, the patio-potterer, and the balcony-planter alike, including a chapter on container gardening; and speaking again as a busy townie, whose plot is not just outside the backdoor, any tips on managing with a visit just once or twice-a-week are welcome (they are there, waiting to be dug out). For everyone, it is the go-to-grow-too manual.

The Salad Garden is an up-dated edition of a classic which first appeared over 15 years ago when Joy brought a first flush of foreign-sourced, exotic-sounding, leaves to the party – it was based on “field-work” touring Europe in the 70s by caravan, with Don Pollard – Joy’s husband, and the book’s dedicatee - and their young children.

Don incidentally was chair of the rural and agricultural workers group of the TGWU in the late 90s, and maybe known to some readers. Joy Larkcom was, said Anna Pavord (another great lady of gardening) “a pioneer”.

This new, lovely, edition confirms Joy Larkcom’s place in the Pantheon as, without doubt, the Queen of Greens.

Blog Postscript:
With thanks to Joy Larkcom, who - together with her family - has taken great interest in this Herbert Jacobs series after I established the connection and tracked her down. Unfortunately, she never really knew her grandfather and, as far as she is aware, none of Herbert's chess memorabilia has come down via her father Eric. Incidentally, Joy and husband Don celebrated their 50th wedding anniversary just this week, so congratulations to them. (NOTE added 11 August 2017: Sadly Don succumbed to cancer a week ago: my condolences to Joy).

Thanks also to publishers Francis Lincoln for the review copy of The Salad Garden, and to my old comrade Mike Pentelow and the Country Standard editorial collective for the suggestion to write something on allotments, a happy coincidence with the publication of Joy's new edition.

Vol.18 No.1 of the Country Standard was an insert in the Morning Star of Saturday/Sunday July 15-16 2017, published to coincide with the Tolpuddle Martyr's Festival that weekend.