Well, I'm delighted to report that has got to his century and is still going strong - with an horizon limited only by the number of game scores that have come down from Duchamp's chess career (and it seems that a few more have come to light). In the course of getting to his ton, Tom has varied the method by which the moves are represented. He started out in black and white as above. In another phase of evolution (and still b&w) he showed the move-pair sequence (e.g. 1. d4 Nf6) of a complete game in one array; then colour-coding came along. Both are exemplified here:


There have been other  variations along the way, but his show at 57W57 Arts takes another main line a few moves further. We are in the realm of monochromes, where the foot-print of the moves is laid down in sedimentary layers of a single colour. 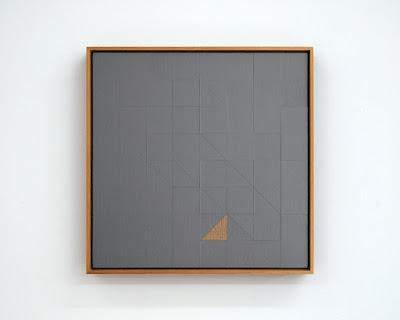 In this one, the uniform light-absorbing grey abolishes the classical hierarchy of the chess player's chessboard; here all squares of the grid are equal - the centre does not hold. Except that this is contradicted by the accumulation of films of paint which make some squares stand ever-so-slightly proud as a consequence of repeated visits. Some squares are more equal than others. This surface modulation requires close attention in order to appreciate its subtlety - the "facture" is one of the most beguiling aspects of Tom's meticulous work. Paradoxically his paintings, driven as they are by the contemporary conceptualism, are realised by painstaking craftsmanship deriving from classical techniques.

Among those anonymised squares, an unpainted triangle catches the eye. So, what is this enigmatic revelation on e2 about? It is the negative space that carries the positive charge. It is a knowing Duchampian wink and his wry corner-smile. Chess players will immediately understand that the f1 Bishop must have taken off somewhere along the short diagonal, probably to g2. Non-chess players will wonder if the artist simply missed a bit, like when you dust the mantelpiece without moving the clock. Paradoxically (that word again), Tom's rule-bound method has produced an accidental coup as if by design. Should he claim credit, or should that go to Messrs Lancel and Duchamp?

And while we are in the world of the grisaille, what about this, from Tom's recent show in London:


From the dark of Chess Painting No.101 into the light, via black. The subtle interplay along the grey scale is another retinal delight. There is a translucency in the image and a transparency in the game, and the overlay of moves in the centre has produced, once again, an accidental by-product: here a trompe l'oeil apparently in three dimensions. This is retinal with knobs on. You don't need to know the chess to experience the illusion; your brain does it for you - and those little grey cells make some others look whiter than white by the trick of simultaneous contrast.

Oddly enough these Notation Drawings - where there is no effacement by overlay such as in Chess Painting No 2 - present a game view not even a chess player normally has available: the geometrical pattern of the whole game is revealed. You can see it all, rather like a whole-body MRI.

And now add some colour for another work that slides up and down a single scale. Or does it?


One has to be careful with No 2 in case we have been genuinely deceived by the failure of electronic reproduction to be true to the original: but unless my eyes (and my computer) are playing games, as the colour saturates by overlay, so it, well, changes colour. From pink/rose, through orange, towards magenta and alizarin crimson (though these colour labels are porous). Magic. By the way: for a bit more on Duchamp's opponent Abraham Baratz (sic), the chess player, sometime champion of Paris, and sculptor, come back in a fortnight's time.

At the century mark we can look back and admire at how a single inspired idea - to realise Duchamp's chess moves in paint (or some other chosen medium) on an 8x8 grid - has endless possibilities, with so many unexpected consequences: like chess itself.

So congratulations to Tom for reaching one hundred, and we look forward to the next. Today, 8th September, he is in New York for the opening of the 57W57 show, and we wish him good luck with it (and his visit to the Marshall Chess Club). It is with great pleasure that we follow his career in the ascendant: from Hackney to the heights.

There's more Duchamp coming up in London soon, revealing all about his relationship with Dali. I wonder if they played chess together. And for a more remote chess in art connection there's soon to be a Dorothea Tanning exhibition (here): she played chess with Max Ernst.