He starts his review of his chess achievements at the end, in 1945, with "I am a Vice President of the Surrey County Chess Association", as indeed he was in that year, as confirmed by Martin Cath, Archivist of the SCCA. In fact, says Martin, Colliver had been a Vice-President for many years, but can't be more precise as to when he was first elected. A list of members of Streatham CC (then a separate entity from Brixton CC) from the 1927-8 SCCA Year Book (below) helps a bit: it has the V-P indication attached to Colliver's name...


However, we can go back a bit further than this. There is a suggestive clue in the official listing of the players in the "World Record" Chess Match of 16 April 1921 played over 200 boards between Kent and Surrey. Colliver played on board 65 and is shown as from Thornton Heath. In the listing Colliver was not dignified as a "V-P" (as compared, for example, with the veteran T.H. Moore, an early Secretary of the SCCA). 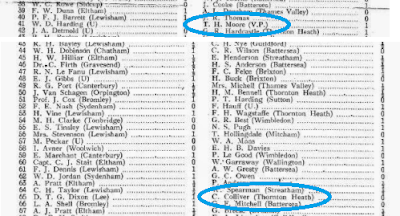 This suggests that Colliver's elevation occurred later than 1921. Apologies for getting drawn into such detail - we will come on to why it matters in a moment. Incidentally, Martin Cath has Colliver recorded as a member of Streatham CC from 1919 to 1928: although, rather unhelpfully, Colliver doesn't mention at all his membership in his Reminiscences - which is odd as, by contrast, he went into the detail of his bowls club, and some of his other affiliations. Perhaps he never held office in Streatham CC, nor took any noteworthy scalps playing for them, so didn't think the club merited a mention.

Colliver does, however, refer to his appearance in a Surrey County match in April 1920. This was in the same year as his first appearance for the County (as recorded in the official Match Books) on 24 January 1920 when we can spot him stepping in as a substitute on board 24 for Surrey v Essex (he drew). In every year thereafter, through to 1939, Carus can be found in two or three County matches (including by correspondence) - usually between boards ten and twenty. He got as high as board 8 when he represented the Croydon League in a match versus the Rest of Surrey on the 19 January 1924 at Thornton Heath, losing to George Wernick. (For the story of the Surrey County matches, including against the Croydon League, as told by the Match Books, see here.)

As mentioned above, there is the one explicit reference in his Reminiscences to a County match: his victory over Mrs Stephenson "the Lady Champion of Great Britain" on 24 April 1920 in a Surrey v Kent encounter (it should not detract from his achievement to point out that she only became Champion in August that year, at the Edinburgh BCF Congress). However, per information from Martin Cath, the Match Books actually show an engagement between Surrey and the Croydon League on that date, so he may have misremembered the detail. Carus doesn't mention that he played Mrs S again, in 1931, on board 24 of what was then, without doubt, a Surrey v Kent match. They drew their game on this subsequent occasion.

Colliver's Reminiscences also highlight his success in a number of simuls. The most well-documented is his draw with Capablanca on 10 October 1919 - as reported in the BCM of November 1919 and elsewhere - when Capa came down to Thornton Heath to take on 40 representatives of Surrey chess. The local Surrey Comet had the story:


The Croydon Advertiser of 25 October, and the Norwood News of 24 October 1919 were even more expansive in their coverage, both giving the full list of players (of these two, the latter makes the more entertaining read, and you can find it in the Appendix 1). Capa's opponents included several "brilliant players" (according to the Advertiser): A.J. Mass (S. Norwood), F. Dark (Kennington), H.C. Griffiths (Brixton - a victor), A.W. Fisher (Thornton Heath), Redway (Richmond) and E. MacDonald. (Streatham). Local arrangements for the match "were in the hands of Coun. W. Adams and Mr G. R. Hardcastle, chairman and secretary of respectively of Thornton Heath and Norbury Chess Club." (Croydon Advertiser 25 Oct 1919).

Colliver success was commemorated in this montage - providing us (at last) with Carus Colliver's portrait.

As pointed out in Winter's Chess Notes 3757 back in 2005 when discussing the montage, Capa wasn't to become World Champion until 1921, and his image above "looks like a 1922 shot" (albeit in reverse). It is not clear whether Colliver's own portrait photo is contemporaneous with the simul itself, or made at some other time (he would have been 57 in 1919).  As we indicated above, it is unlikely that Colliver was a SCCA V-P in 1919 (the year of the simul); so it is probable that the montage as a whole was devised later - 1922 or sometime thereafter.

What is remarkable is that Colliver drew with Capa again, on the 13 December 1925 - his Reminiscences recall this taking place at the Newman Galleries, as corroborated by this press cutting which says Capa took on 47 boards. In this report our hero is not mentioned - but then nor is anyone else.


The wording of Colliver's reminiscence - of him beating F.D.Yates in a "match in Streatham" on 27 October 1927 - suggests that this simul was a more local Streatham CC affair, but as yet I have not found any further reference to the event in the local press of the time other than the cutting below - which also refers to a "simultaneous display in Streatham". Nor am I aware of any Streatham Club records relating to the event. In 1939 at the onset of WW2 Colliver was 77 and, if the snippet  (undated, but probably from 1945/6) is anything to go by, he continued to play casual games at a well-known Streatham chess-venue during the war years, i.e. when he was in his 70s. 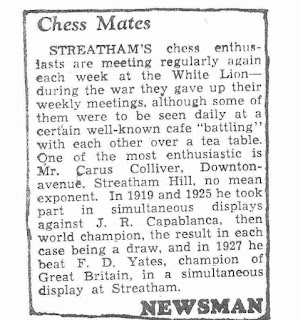 His exact address was 93 Downton Avenue S.W.2, as his Reminiscences mention. He had lived previously at Mount Nod Road, Streatham. He died on 2 April 1954, having been predeceased by his wife Clara in December 1943, and she is buried in Streatham Cemetery (as is Henry Bird, and Sir Wyke Bayliss - an early Brixton CC member, of whom more anon, maybe). In spite of searching, I have been unable to find her grave even though Carus gives the location. [But see Appendix 2]

So we come to the end of this account of the remarkable Carus Colliver. His active sporting career beyond Cornwall more or less coincides with the life of the independent Streatham Chess Club - from the 1880s through to the 1940s. It stretched from late Victorian era, through the Edwardian, almost to the Second Elizabethan - bridging two World Wars. If a history Streatham and Brixton Chess Club(s) ever gets written, then Carus will surely get a paragraph or two to himself.

Now that this Streatham Strolls West has returned home, a coda on the theme of another draughts-playing chesser: this time someone who played for Streatham and Brixton Chess Club within living memory. We are talking about the prodigiously talented Rawle Allicock, a member for most of the decade of the 1990s (as far as we are able to reconstruct).


Rawle said that he developed his sans voir skills in the back of the car travelling to away matches. After S&BCC he went on to play for other clubs, and at some time went to the States. He can be spotted on the right in this 2012 photo at the Marshall CC....


.
..and, still at the Marshall CC, he disposes of GM Irena Krush in December 2016 in a game linked here.

Rawle gets a special mention in this Streatham Strolls West, not only because of his travels in that direction to the other side of the pond, but because, like Carus Colliver, he also did draughts. He was the winner of the British Open Championship in 2008, and has played for the national side. John Gillbard's book has a picture of Rawle in England team in 2010, but this pic of him in action in a World Qualifier in Prague in 2005 is clearer.

Any other news of Rawle would be gratefully received, otherwise we are not aware of any other combined chess and draughts experts in the history of Streatham and Brixton CC - but if we find any you will be the first to know.

And so, finally back home and relatively up-to-date, we call a halt to this rambling stroll. Where next?

Appendix 2 added post-publication, also on 17 11 2017
Nigel Guess has just given me precise details of the location of Clara's grave in block 16 (it is on the edge of the block near the south east corner. In fact, Carus is buried there as well.