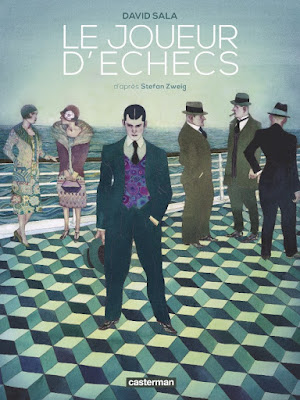 Review by J. Milette on the BDGest' website here - freely translated by MS

"Mirko Czentovic is world chess champion. On a steamer leaving New York bound for Argentina he agrees, reluctantly, to play a wealthy passenger. This single adversary is abetted by a whole group of gents., among them is a Mr.B., a lawyer, who shows himself to be especially talented. He admits to not having touched the game for 25 years. How is it possible that he can hold his own against the master? While he tells his story, he reveals that the diversion of chess saved his life, and then almost destroyed it.

It is an outstanding adaptation by David Sala of Stefan Zweig's most-celebrated novel. The reader will experience the full force of the original text published in 1943, a little after the death of its author. The game (and the psychological warfare played out by the opponents) represents the appalling depths of the confrontation between the hero and and his tormentors during interrogation by the Gestapo in occupied Austria. Although this brilliant story may not have been originated by a cartoonist, it is elevated in this cartoon strip - while its particular qualities are preserved by it. Sala endows the story with great power, especially by giving a voice to silence.

Yet the artist's own personal style shines through in the use of beautiful and bold water-colour. You will have to look to the provocative images of Gustave Klimt to identify the influences - for example in the clothes, rich in floral patterns, worn by the characters. The décor of the liner (often inspired by Art Nouveau and Art Deco) recalls the same era. In fact, the ensemble evokes the 1920s more than 1941, the year when the action is supposedly set. The arrangement of the images often resembles a grid: five times four vignettes, all squared-off, sometimes superimposed one on another. To cap it all, the tiling of the floor of the salon where the duel takes place looks like a chess-board: it appears to have three dimensions, inducing an unstable and unsettling feeling in the reader.

It is a masterly work: an audacious fianchetto followed by a bishop sacrifice on g7... One for the anthologies...."

Fifteen pages in total (from the book's 128) are reproduced on the BDGest website - click on Informations/La Preview. Here are three of them. 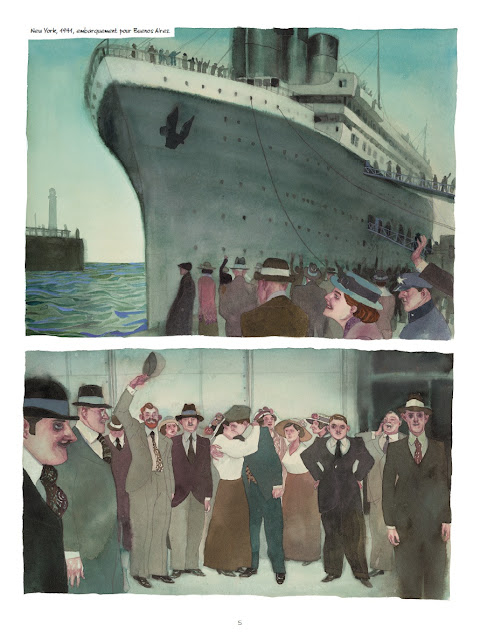 Pages 18 and 19: The dapper world champ takes his adversaries, lead by the wealthy, cigar-chomping McConnor. Czentovic casually plays "sans voir" from a scarlet settee at the end of the room. They signal to him that they have moved by pinging a glass. 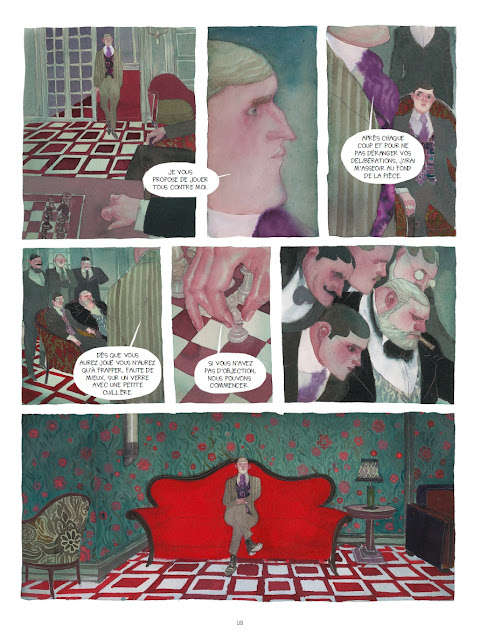 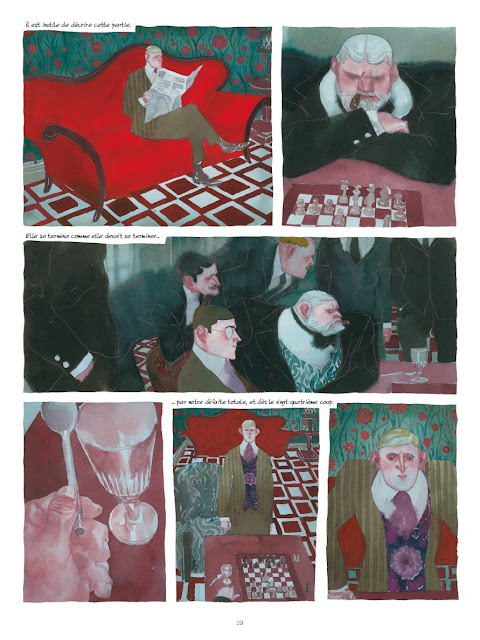 Czentovic wins, of course. But Mr B has yet to arrive, tell his story....and play the champ one on one.

I'd never appreciated BDs....till recently when, one day in Foyles, I stumbled on this stunning production in their foreign language section. BDs are referred to over here as "graphic novels", which goes someway towards recognizing their serious intent.

(For one review of the original Stefan Zweig novella "The  Royal Game" on a chess site, see here.)