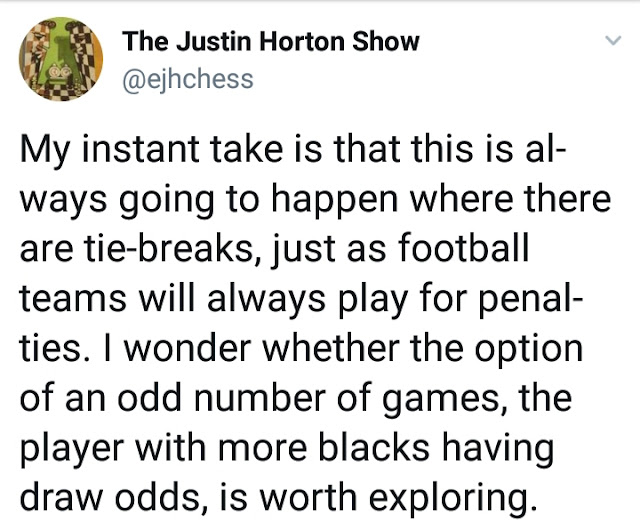 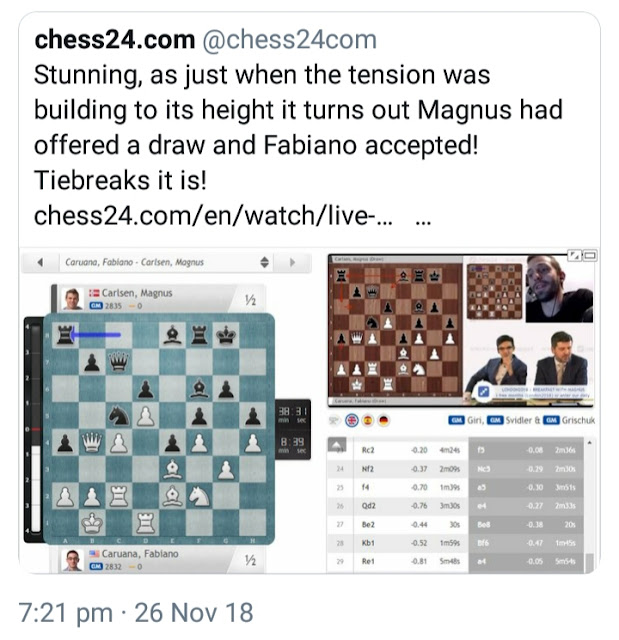 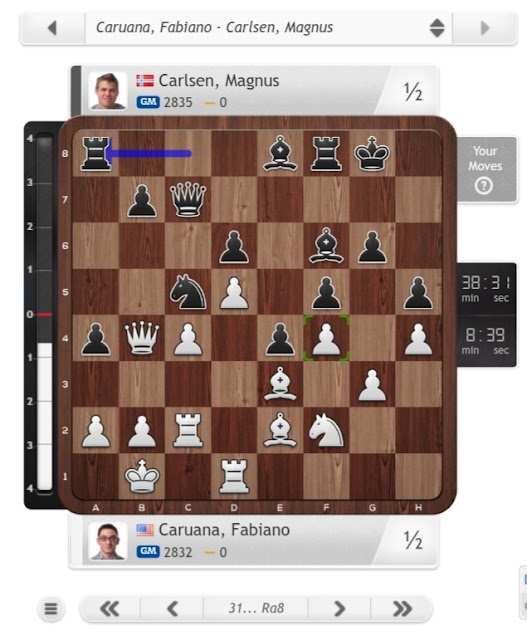 I wouldn't mind a thirteenth game. (Or a fifteenth, or a seventeenth.) Tie odds to the player who has an extra Black. Who should that be? Maybe let the champion choose, that can be the nature of their edge.

Ideally - and no system is ideal - a system should


Seems to me it's simple enough to understand. Whether it's as fair as possible - I think we all know that the only fair way is to play to a given number of wins, but that isn't going to happen, for all kinds of good reasons. And we ought to have much longer matches than a dozen games, but that probably isn't going to happen either. Whether it would affect the way the players play - I'm not seeing it, any more than it has affected matches in the past when a player has gone one up.

But the scores were level at the end.
Posted by ejh at 8:00 am

Suspect I'm less keen for change than others are because I've enjoyed the match and feel it's been a contest (despite the fact that all games have been drawn).

That said I'd prefer a longer match - say of 16 games - to give, I think, a greater chance of decisive results.

Perhaps an option would be to have fewer rest days. Three games in three days days and then a rest day - as in the Candidates tournament - would allow for 14 games with the same match duration.

Another idea: how about resolving tied matches by game count - like board count in tied team matches? For each player, sum the game numbers of won games; the winner is the player with the lower score. If the result is still a tie then eliminate the most recent decisive result and count again.

It strikes me that my tweet may give the impression I think every match will "always" go like this one has - for clarification, "always", refers to the situation in which Carlsen found himself. (I should probably have said "always likely to happen, but that's the problem with instant takes...)

I couldn't cope with the quadruple negative of "What isn't a matter of debate..", but guessed what you meant.

Why not give the champion draw odds, and force the challenger to win outright? I expect the organisers like the current set-up though: blitz games /are/ pretty exciting. Choosing a champion by armageddon wouldn't feel right, though.

Why not give the champion draw odds, and force the challenger to win outright

Perfectly viable plan: it's just with an odd number of games you'd force them to hold another game with Black to achieve that, which might strike some people as a slight inprovement.

I wouldn't mind a thirteenth game. (Or a fifteenth, or a seventeenth.) Tie odds to the player who has an extra Black. Who should that be? Maybe let the champion choose, that can be the nature of their edge.

This idea was suggested in 2016. The seemingly fatal flaw (your #2) is that person (undoubtedly the champion if you let them pick) with one extra Black has in fact a LARGE advantage (only slightly less than draw odds in the match). An 8-8 draw is about a 15% chance in a 16-game match (so overall 57.5 vs 42.5%). You system maybe gives the challenger a 44% chance or so.

To make it "fair" you need to give FIVE extra Whites to one side (10-5 or 11-6 split), and that's assuming rather low draw rates by modern standards. (This is independent of the total number of games, as one assume the other games with equal black/whites are split if the players are equal).

Still, FIDE seems to just randomly pick its systems anyway (the WCOC and/or Agon just rubber-stamp whatever is proposed, occasionally nodding to the Smartest Person in the Room for whatever pseudo-explanation is needed). Occasionally they ask math boffins (like the Polish guy Bartosz Socko), etc., but usually it's just by "feel" from FIDE insiders.

Whether it's easier (your #1) to explain a 5-White edge is unclear. OTOH, I think it's clear one extra White *would* affect play (one side essentially has draw odds), and of course five more Whites would undoubtedly modify play too, but in a different way.

Another application of the same theory is that instead of having teams-of-4 play via split colours, you could instead give one team (either with teams of 4 or 5 players) all the same colour, and the other draw odds (cf. China vs USA in Olympiad).