Broadmoor Chess - A Feast of Stephens

A bit late for Boxing Day this post may be....but even further back in the mists of time, on the Streatham and Brixton Chess Blog, we examined the chess played by the patients of Broadmoor high-security hospital at Crowthorne, west of London - though it would be more accurate to say that we examined the patients who played the chess, rather than the play itself. It all started with Richard Dadd, Victorian artist and patricide, who painted - in 1857 - a puzzling chess-themed picture 'The Child's Problem'. We've shown it before, we analysed it at length in several posts, and here it is again...

The series continued with other Broadmoor chessers: Edward Oxford (who took a pot-shot at Queen Victoria - or did he? See Postscript below), Reginald Saunderson (a Jack the Ripper might-have-been) and Robert Coombes (the "Wicked Boy" of Kate Summerscale's excellent recent book). It is especially pleasing to see that another of our subjects, problemist Walter Stephens (1857-1947) - he shot his wife while he was 'sodden with drink' - has come to the attention of Bob Jones, who adds to the Stephens story in a fascinating article in the January 2019 issue of Chess magazine. It now becomes the tale of two Stephens....but we'll not be a spoiler in relation to the other one: for that you really should get hold of Chess.

Walter Stephens of Clapham Park (hence our particular local interest) was to become a dedicated problemista at some time after confinement 'at his Majesty's pleasure' in Broadmoor in 1905. He became a competent solver winning, for example, in January 1926, the Grantham Journal's 19th Solving Tourney, and his own compositions were published widely in the newspaper chess columns and the BCM - often declaring himself as W. Stephens of 'Crowthorne' or 'Broadmoor'. Irked by the lack of recognition of the good work done at the hospital he had complained in a letter to the Daily Telegraph in July 1922 (alongside two of his problems) about "the piffle" that had been written about the place.

Now more has come to light about Broadmoor Stephens, thanks on the one hand to a piece of serendipidy that befell Bob, and on the other to some local newspaper reports that befell me.


Bob's revelations follow from some ancient roughly-bound volumes of the British Chess Magazine that had recently come his way, and which - remarkably - appear to have passed through the hands of Walter Stephens himself. The volume for 1926 contains some cuttings, and jottings in Walter's own hand (illustrated in the Chess article), suggesting the possibility that he had engaged in a little problem-plagiarism: the case in point having been originally published by someone else back in 1893. Such shenanigans were endemic and, as Bob explains, publishers took special precautions to weed them out. By the way, we blogged about another example, perpetrated by chess-artist Anton Rosenbaum (see here) - he denied it, of course.

In a scribbled note inserted in his BCM, Walter Stephens, too, protested his innocence, furthermore alleging that another composer - one L.C.Hallam - was rather more suspect. Bob reproduces a Hallam composition from the Lancaster Guardian 15 January 1927 which appears to be but a thinly disguised duplicate of a Stephens published four months earlier. You can see another Hallam in the Linlithgowshire Gazette  of 22 March 1929, and this time he, also, revealed himself to be from 'Crowthorne'. So, might Hallam have been a fellow patient at Broadmoor, someone to add to our Pantheon of Broadmoor chessers? Question mark required, as Bob indicates.

My own digging shows that L.C. Hallam has 8 problems in MESON sourced from various publications between 1926 and 1929, and there are many others ('always something unexpected in Mr Hallam's problems' was a comment on one: little did they know); he was a regular solver in the Linlith Gazette, and corresponded knowledgably on the value of a certain type of solving competition (Falkirk Herald 23 November 1927). Then, after 1929, he seems to disappear - except for a reference to L.C.Hallam of Liverpool in the Linlith Gazette of 6 June 1930.

Looking elsewhere, there doesn't appear to be any plausible genealogical trace for 'L.C. Hallam' via Ancestry - unlike the clear record for Walter Stephens himself (in the Lunacy Patients Register: DOD 26 July 1947 - registered at Windsor - his DOB was given - a few years adrift seemingly - as 1860). So, there arises an intriguing possibility, suggested by Bob: might Hallam have been Stephens himself: the latter was already known (back in 1905) for adopting an alias. Intriguing!

Whatever the truth about Hallam, Stephens circulated in the problemosphere until as late as 1941 - with a composition in the BCM of June that year (still from Broadmoor) followed by a 'Many Happy Returns' comment for his 84th birthday (putting his DOB at 1857). 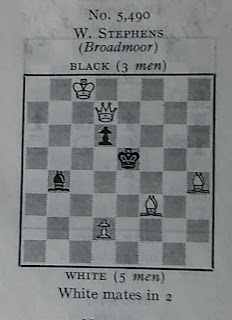 So far, so not definitive about Hallam. But then neither was Stephens' first murder trial conclusive. Yes: for the tragic murder of his wife Edith on her return from a holiday Stephens was tried twice (in the matter of Stephens we often see double).

Since our original S&B Chess Blog post some more local newspaper reports have turned-up of his trials - both of them. At neither did he deny the shooting: at both he pleaded insanity. A report of the first trial (see Old Bailey transcript here) in the Manchester Courier of 15 September 1905 (the shooting was on 24th August just three weeks before: they didn't hang about) said there was 'no apparent motive', and evidence from 'a doctor' said Stephens (or Cyril A. Desparde as he wanted to be known) was 'suffering from delusions'. It was a 'protracted hearing' according to another report the South London Press, after which the 'puzzled jury' could not agree a verdict and was discharged. No doubt he did it: they just couldn't agree whether he was sane when he did.

When ordering the second trial, the Court required more information about Stephens' background, and about a neighbour, Mrs Mackinnon, who had been in possession of a letter that Stephens claimed would reveal all. The re-trial followed forthwith, on the 16th October 1905 (transcript here). More detail emerged about Edith Stephens' holiday (alone, apparently) in Great Yarmouth - though no evidence was given that this had disturbed Walter's mind. The Mackinnon letters (there were two) were nothing but notes from the Stephens's domestic help - but he had been convinced of something more sinister and this was said to be evidence of a delusional state. Overall, it was, according to Dr Scott of Brixton Prison, 'impossible to deny that the prisoner might have had delusions'.

There was also a specific reference to Walter's 'past life and....his troubles in America and so on': perhaps this was only circumstantial concerning his personal stability, but of crucial significance for Bob Jones's speculation in his article in Chess (go read!).

Overall, the trial evidence appears to have been not so much different the second time around, but now the Jury didn't prevaricate and convicted 'without leaving the box': 'GUILTY of the act, but insane at the time. Confined during His Majesty's pleasure'.

We have the South London Press 21 October 1905 to thank for providing us with this image of our man... 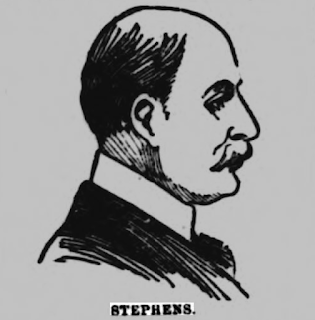 ....and we have to thank Bob Jones for his revelations concerning Walter Stephens (or whatever he was called...).


'The first attempt to harm Queen Victoria was made by Edward Oxford in 1840. He was an 18-year-old barman who fired two pistols at the Queen's carriage...Oxford made no attempt to escape and was charged with High Treason...Doctors asserted that an inability to control impulses was the correct test of insanity rather than an ability to tell right from wrong. Relatives, acquaintances, Oxford's former schoolteacher and police perceived him to be insane. However, no clear delusions could be described...The jury found him to be not guilty by reason of insanity (*) and he was committed to Bethlem criminal wing, where he showed little or no evidence of insanity. In 1864 he was transferred to the newly opened Broadmoor. In 1867 he was discharged on condition he emigrated to Australia. During his years in Bethlem and Broadmoor he taught himself several languages and lived out his days working as a writer. This does not refute, but casts doubt on, whether or not he had been insane.'

(*) Note that the law had changed by Stephens' trial such that you could then be found both guilty and insane - MS.