Ms Tanning made a mark chess-wise when she was caught up in the surrealist art-scene in and around World War 2 in New York, where Marcel Duchamp - who featured in Revisit 2 - was causing a stir, along with the other 'ship-wrecked Surrealists' as she called them: refugees from continental Europe - among them Duchamp himself, Man Ray, Leonora Cannington, and of course Max Ernst (1891 - 1976). Many of them, Dorothea included, were involved in 'The Imagery of Chess' exhibition which ran from 12 December 1944 to 31 January 1945 at the Julien Levy gallery in New York City. Levy himself was a chess enthusiast - 'a single brain-cudgeling parti with him could last for days' reported Tanning. He sought to feed his passion for the game by tapping the creativity of this coterie of surrealists so as to produce new sets, new chess-themed art-works, and even some chess music. On January 6th George Koltanowski played a blindfold simul against several of the artists - Duchamp was in on the action as referee.

For the 'Imagery of Chess' Dorothea Tanning produced 'Endgame', which is the first work you encounter at Tate Modern. It looks a bit smaller than I imagined (17 inches square; about the size of a proper board) and a little bit dowdy, being now 75 years old: but such a piece of chess-in-art is a welcome sight in any exhibition.


It was created in the home-cum-studio that Tanning and Ernst were already sharing two years before their marriage in 1946, and it can be read in the context of their nuptial manoeuvrings. Ernst was a German and was on the move because of the war. He had a rough ride in France (he was an 'enemy alien') besotted, as he was, with the other-worldly Leonora Carrington, and then more or less so with the this-worldly Peggy Guggenheim. She got him into the States, and they married in 1941. The US authorities also gave him a hard-time on and off: here, too, he was regarded as an 'enemy alien', real or imagined. In 1942 he met Tanning, the year in which she was untangling from a unsuccessful marriage.

Max extricated himself from his fraught relationship with Guggenheim in 1946 when she accepted the advice ('end it') offered by her bi-sexual lover Kenneth MacPherson. The Ernst/Tanning marriage followed without further ado. As Peggy Guggenheim observes in her autobiography 'Out of the Century' (which gives an ungenerous account of the episode, perhaps understandably: an older woman displaced by one younger) Dorothea could play chess, something she, Peggy, could not. Max played, and it was over a game (so they said) that he and Dorothea fell in love. They were, it is also said, devoted to each other thereafter.


So, 'Endgame' is readable as a commentary on the preliminary marital mayhem. The white shoe/Queen stamps on the black Bishop (representing the institution of marriage) making waves all about. She zips around the board and emerges from the darkness to perform the coup de grâce. The old order is rent asunder below, where the sunlit uplands of domestic harmony beckon.

Above right sits a set of four rooks, about which the commentators say little concerning their symbolic significance, seeing them simply as yet more pieces that the Queen has taken (i.e. conquered) on her rampage. But, in the midst of this symbol-fest, might they not signify something more pointed? There must - surely - be a hidden meaning. And now I think I have got it. They are (why didn't we think of this before?) 'castles in the air': that is 'imaginary or unrealistic plans, projects or hopes' (as says my dictionary). The Queen's head had been in the clouds, but now that she has been there and done that she gets on with it, for real, on the Queen's side.

To offer my personal view once again: Endgame is rather low-key Surrealism. It isn't stuffed with ominous polymorphic entities welling-up, dream-like and uncensored, from the unconscious - as we  would expect to find in the high-octane variety (some of which comes later in the exhibition, and in this post). In the absence of the human form Endgame appears rather diagrammatic, and relies pretty much on one-for-one substitution of meaning based on familiar tropes of chess allegory (even in its title). And thank God for that, some would say.

The Tate exhibition displays, alongside Endgame, the chess set of Ernst's own design: he and Kolty played with one in the latter's seven-board simul in January '45. That event was captured in a well-known photo-montage (made by Tanning) on show in a cabinet nearby. We saw and blogged it in London, back in 2012 - yellowing sellotape and all (as below) - and it is nice that it's in the show. 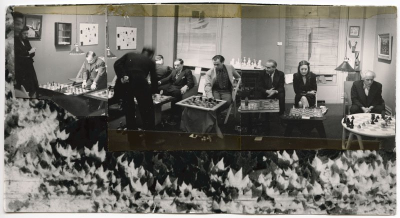 You can see Ernst and his chess set on the extreme right, Tanning is next to him on a Staunton. The montage contains a little joke, given away by the repeat on the left-hand wall. An extra chess board has been smuggled in. Ha ha!

There is one other Tanning chess-piece in the Tate exhibition: Max in a Blue Boat (1947). However, as there is only an empty board in the painting - a bit of a tease for the chess lover - we'll pass on to the real question: could Dorothea and Ernst play proper chess - the sort of thing you'd expect to find down at the club? There is some slight, but suggestive, photographic evidence, plus something documentary.

We have two pictures (cropped above) of Ernst and Tanning playing (with Ernst-designed sets, of course).  On the left, in 1945, they are at the Levy Gallery (thanks to the Philadelphia Museum of Art for the photo). On the right they are posed, in 1948, at their home in Sedona, Arizona (thanks to Bob Towers and the Tanning website). In the first, Ernst is playing a recognisable King's Indian against which Tanning has a conventional set-up (though some might have preferred their white-squared bishop on e2). On the right their game is further advanced, but it looks like a rational position. His King's side looks a bit leaky - I'd say she has the initiative and might even have played some kind of b4, a3 Wing Gambit to acquire it.

As for documentary evidence: Tanning mentions at least a couple of times (in her biographical writing) that she played sessions when Marcel Duchamp came visiting, even as late as the 1960s when he and wife Teeny Matisse, together with the Ernst-Tannings (now living in France), went to Monte Carlo: 'for the chess tournament ...equal time was spent watching the greats and playing on our own boards'. You'd have to be beyond the 1. P-R4...2. R-R3 stage to get quality chess-time with Duchamp.

The exhibition charts Dorothea's long and fruitful career. She had a happy childhood (her parents were unpretentious Swedish immigrants) so uneventful in small-town Illinois that 'the most interesting thing was the wall-paper' - and the Gothic novels she devoured. One could say that her art, in its different evolving styles, was rooted in autobiography. It employs several recurring motifs: open and closing doors (for opportunities offered or missed); pet dogs (sometimes in unseemly human abuttment); and (in spite of her childhood contentment) down-home dramas - enough to make your hair stand on end (another motif frequently applied).

After her early surrealist efforts, where it seemed as if her censorious super-ego had the upper-hand, she later loosened up and found her inner id. It erupted in paintings of fleshy abandon, and in creepy sculptures fashioned from stout cloth on her Singer sewing-machine. The show-stopper is the claustrophobic diorama Chambre 202, Hôtel de Pavot of 1974. It re-creates a tawdry hotel room infested by slug-like humanoids oozing from, or back into, the furniture. As if to comment on the cheapskate flimsiness of the partitioning in such down-market establishments: glabrous and repellent squabs blunder through here and there (the wall-paper is rather more interesting now!), either blind or in libidinous embrace. There is an alarming disjunct between the homely Dorothea, as displayed on the Tate's signage, wholesome in her all-American skirt, blouse and pinny, and her rampaging imagination seeded by her adolescent addiction to the Gothick.

She survived Ernst by almost 40 years during which she formed another fruitful relationship - this time poetical - although Max's successor also pre-deceased her. She had a long and creative life as a writer, poet, stage-costume designer, as well as a prodigious artist. You may not warm to everything she produced during it, but she certainly merits this fine retrospective and the posthumous attention it brings her.

Lost in Art
Chess in Art