Lucky not to have been physically assaulted 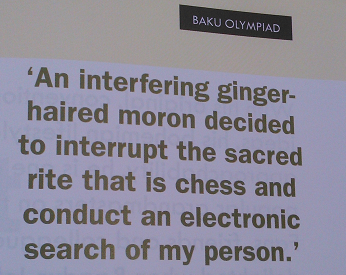 I was flicking through New In Chess at half-time in this afternoon's match and the clip above happened to catch my eye. Here's some of the same passage, in Nigel's piece itself (it's from his notes to his game against Li Chao rather than his Short Stories feature). 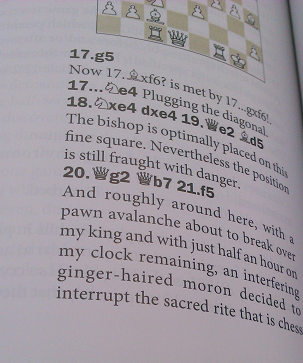 So far, so very Nigel, with insults over the place. He likes to dish it out, does Nigel, but call him Nosher and you'll see how good he is at taking it. Still, "ginger-haired moron" is small beer by Nigel's standards. There's worse to come.

Here's the rest of it. 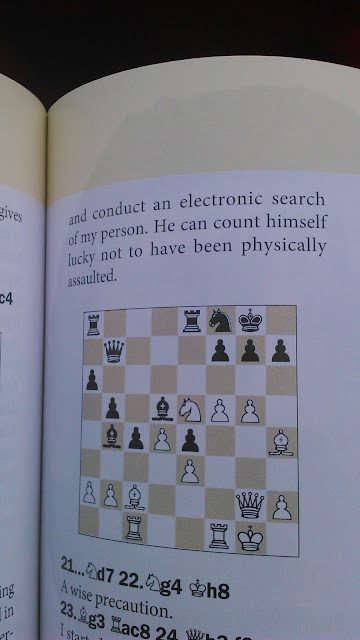 He can count himself lucky not to have been physically assaulted.


Now I blame myself for not spotting this before, but in fact this isn't the first time that Nigel has made the same threat.

I say "threat" because that is what it is. If you say that somebody was lucky not to be physically attacked, by you, and you are expecting to meet and work with that individual again, that is a threat. It is an attempt to frighten them, to intimidate them with the prospect of physical force.

And as I say, it's not the first time. Here's Nigel in September.

As I say, I missed it before. Let's highlight it so nobody else does.

Well at least back then he had the excuse that "a glass or two of wine had been consumed". Writing it up a month or so later, he clearly had no such excuse.

You don't do this stuff, not even if you've played for world championship titles. You do not, explicitly or implicitly, make physical threats to the officials who oversee your sport. Nor to anybody else.

I guess people are long since used to Nigel behaving like this, which is why nobody picked up on it before, though another way of saying that is that we have become so used to indulging him that we don't notice that we're doing it. We might also ask ourselves what New In Chess are playing at in printing this garbage, though since that magazine shows not the slightest sign of having any kind of editorial standards where Nigel is concerned, I guess we've got used to that as well.

Perhaps we shouldn't be so used to it. Perhaps we should step back a bit, forget that we are used to him and ask ourselves what would happen if a footballer, a tennis player or a cricket player, after an incident with an official that took place while they were representing their country, said that the official concerned was lucky not to be assaulted.

I think they'd be lucky not to be suspended for a long time. Very lucky indeed.
Posted by ejh at 8:30 am

Whirling back in the Spectator Archive (17 June 1994, page 52), it seems that Nigel was unhappy about the Trump Tower venue in 1994 (or at least that's what Raymond tells us).

The playing conditions in the Trump Tower, reported- ly, leave much to be desired and after the early rounds Nigel insisted on a switch of room. This is an extra organisational irri- tant for the leading British representative which he could well do without. As a founding member of the Professional Chess Association, who are staging the matches, Nigel doubtless feels responsible for the overall conditions, as well as the standard of his own play. Nigel's distrac- tion became manifest in round two when he blundered away a piece in one move.

Kramnik was also noted as being annoyed by the Trump Tower being public, as thus smoking was forbidden. It seems that admission was free (mentioned in a different article).

British club chess has run for years without the presence of arbiters. This contrasts with cricket, hockey and various codes of football where umpires and referees are essential to the conduct of competitions.

Unlike mainstream sports, many participants in chess are older and have more experience than those seeking fame and fortune as arbiters.

Ask yourself this, if you had a critical position and an arbiter tried to intercept you on the way back to the board, what would be your reaction? Mine would be much the same as Nigel's.

Imagine for instance that you expressed similar sentiments ay work, maybe in s staffroom or canteen, or that you emailed somebody at work saying they were lucky you didn't hit them. If you kept your job, you would be the lucky one.

Nigel is not often bound by societal niceties such as refraining from saying what he really thinks/feels. As RdC points out, many might have such sentiments -- yet few would voice them as such.