The king stay the king

Potentially interesting show on BBC Radio Four at 11 this morning, or any time after 1130 if you want to listen on iPlayer. 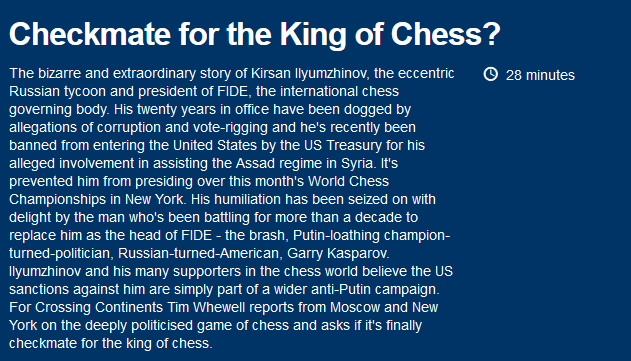 Last time (to my knowledge) that Radio Four caught up with the king of chess was in 1999, or maybe very early 2000, when there was an item on a sports programme that I can't even remember the name of, or anything at all about it for sure, other than that I do at least remember listening to it (and the Newcastle kitchen where I heard it). I think Sarah Hurst and Jon Speelman might have been on it, but I'm afraid other people's memories will have to compensate for the failings of my own.

Anyway these days we no longer have to listen live, which is just as well as I'll be working when the show's on. Matter of fact I probably won't get to hear it until Saturday. So if anybody hears it before then and has anything to say about it, please do use the space below, and don't worry about spoilers.

I imagine Kirsan will survive whatever the programme has to say though. He might even survive a lot longer as king of chess than Magnus Carlsen will, and I'm not sure I would have said that a few months ago.
Posted by ejh at 8:30 am

From what I remember of the previous programme, it built on Sarah Hurst's campaign for a boycott of the Elista Olympiad. There was a spokesman for the BCF who was given a slightly hard time by the interviewer for not being willing to consider Kalmykia's record on Human Rights or Kirsan's personal involvement. It would have been one or more of David Anderton, Gerry Walsh or Stewart Reuben speaking on behalf of the BCF.

It wasn't until 2006 that there was even a candidate for the BCF/ECF to support in opposition to Kirsan's continued Presidency. With neither chess activity nor head count of chess players influencing the number of votes to be cast, Kirsan's re-election could depend on continued support from Federations no larger than a chess club.