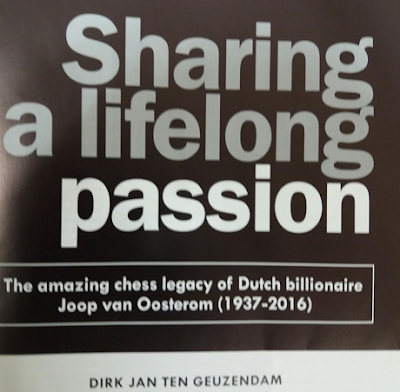 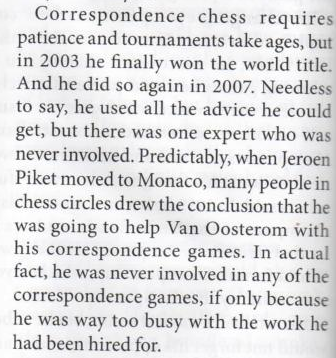 I assume it's because "used all the advice he could get" is a euphemism, that Dirk is tacitly accepting saying that Van Oosterom went beyond the rules in the help that he received, and therefore he cheated to win those titles. OK, but if that's so, why not say so? It's not a small thing. It's not a joke.

It's not a joke if somebody wins a title by cheating, it's a scandal. Dirk writes: "correspondence chess requires patience and tournaments take ages" - that's so for the other players, not just for billionaire chess sponsors. Their time and patience is robbed from them if another player cheats. To pass over this scandal with a little quip is to cheat them once again. The inability to write plainly on this matter cheats the readers, too.


in actual fact, he was never involved in any of the correspondence games.

Let's have a think about "in actual fact".

What does it mean, when Dirk writes "in actual fact"? If he has enough knowledge of what happened to use the term "fact", to say, with a high degree of certainty that Piket was not involved, that's fine. Good. I'm glad for Jeroen Piket's sake to hear it.

But how does he know? If Dirk has enough inside knowledge to exonerate Piket, what other inside knowledge does he have? To whose "advice" did Van Oosterom have paid access? Alternatively it could be that Dirk doesn't know any more than the rest of us, other than having heard the same gossip, but if that's the case he doesn't know enough to deliver the verdict that he does.

I guess we don't get to know what Dirk knows, or what he doesn't. Because Dirk's whole approach is to treat it as a joke, hardly worth bothering about apart, of course, from the extremely important task of assuring us of who was not involved. I mean other than that, who cares? So Van Oosterom cheated? So what, says Dirk.

There is also, you'd be right in assuming, not a word in the piece - so full of gushing tributes to his generosity - about tax evasion, about Van Oosterom's appearance in the Panama Papers, about anything of that nature. Well, who cares about all that stuff either, says Dirk.

It's Dirk all over. In that posting I recalled at the top of that piece, there's a video of Dirk talking in Norway in 2015 to Silvio Danailov, even then under suspicion for various serious misdeeds, issues which Dirk waves away with the phrase


There are a lot of things going on that are way too complicated for us.

Now there are worse chess journalists than Dirk Jan Ten Geuzendam - well, one at least - but really, anybody who talks like that should be in another job. A job where deference and incuriosity aren't such massive impediments to properly serving the public.

This kind of stuff is just embarrassing dross.
Posted by ejh at 8:00 am