Jacobs lived a long, and eventful, life. He was born in 1863 (he died in 1950), and was still practicing at the bar in 1941 - then aged 78 - when his active competitive chess was over. He was, though, still fondly remembered by some. Thus, that year (when, incidentally, Emanuel Lasker died) and by then two years into WW2, the BCM had a sympathetic - and revealing - note concerning Herbert's welfare:


"Chess players will be sorry to hear that the chambers of Mr Herbert Jacobs at 1, Harcourt Buildings, Temple, E.C.4., have been damaged, but luckily the damage was superficial, although annoying enough for a member of the profession where documents are all important. We are glad to say that Mr Jacobs is in good health and his usual bright and witty self.......A game which, we believe, has not been published before may be of interest to those who remember that the veteran has for very many years represented what is best in British amateur chess."

The game in question had been played in 1924, by correspondence, between a team representing the English Bar consisting of Judge Haydon, E.G.Sergeant (Herbert's long-standing sparring-partner and his eventual obituarist) and Jacobs himself, against a "Spanish team of legal luminaries": Labora, Latorre and Navarro. There was an off-beat opening: "The Saragossa" 1.c3, popular in the Spanish Zaragosa Chess Club in 1919, apparently, and subject of a theoretical treatise by Juncosa in 1920. This was the other "Spanish Game", and hot theory at the time - in Spain anyway. "The play...bears the stamp of Mr Jacobs' well-known original style", said the BCM  - he was not intimidated by the opposition's shock weapon.


To emphasize the impression gained from episode 5 of Jacobs' enthusiastic embrace of chess novelty (by cable and telephone), in 1914 - year 1 of the First War - we catch him trying "Medieval (Muslim) chess", as the BCM put it, in a match with George Thomas. The Times gave the second game of the match in a "special article" on page 8 of the issue of 5 March 1914. It was played at the City of London CC ("the M.C.C. of the game"). As is well-known, this ancient precursor was slower, and demands a different approach from that which works in the modern game, because of the limited range of some of the pieces and the one-step pawns.


It took Jacobs 94 moves with White to polish off his opponent, though Thomas's own notes say that he could have resigned on move 69. But perhaps the two opponents were in no hurry to finish, imagining themselves to be knights of old with time on their hands until a bit of proper slaughter happened along (which, in 1914, it did rather). Unfortunately, because of the non-standard moves I haven't been able to animate the game online, but if you would like to play it through the score in the Appendix as it appeared in the BCM (it includes instructions on how to move the pieces medieval-style, and Thomas's explanatory notes).

The match took place on the threshold of World War 1, it is a good moment to look a lecture on "Chess and War" given by Jacobs to the National Liberal Club, and Hampstead Chess Club, in late 1915 or early 1916. He offers observations as to how the game, supposedly conceived as a surrogate for war, models the real-world version. However, you will search in vain for any anti-war message, coded or otherwise. Nor is there any pro-war message - which might have been more likely in the climate of the time. Jacobs was 51 in 1914, and thus too old for active service in the forces himself; I haven't unearthed anything significant concerning his contribution to the war effort.

After that medieval game of 94 moves we can note that Jacobs was no stranger to the long game - and having mentioned one Lasker in this post, here is Herbert beating another in 100 moves, in 1913, in what may have been a club tournament game. It is a typical piece of Jacobs tenacity and will-to-win. It looks like he is getting squashed, but hangs on, grabs a pawn and converts an opposite coloured bishop ending.


There doesn't seem too be much on the record about Jacobs in either war - but there is more to be said about his engagement with women's suffrage just before the first: the subject of the next episode.

See also our earlier War Game series via this Index. And check out this excellent post, with a familiar title, by BatGirl on the other side of the pond. 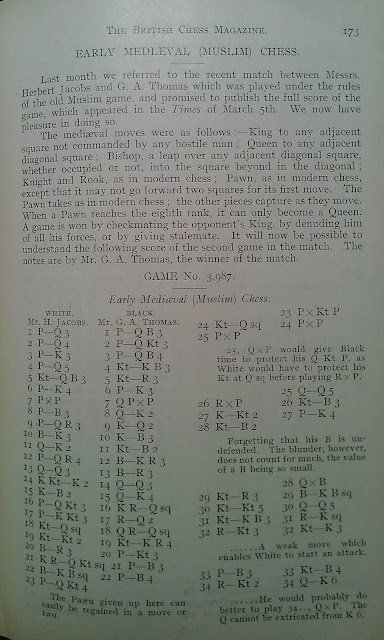 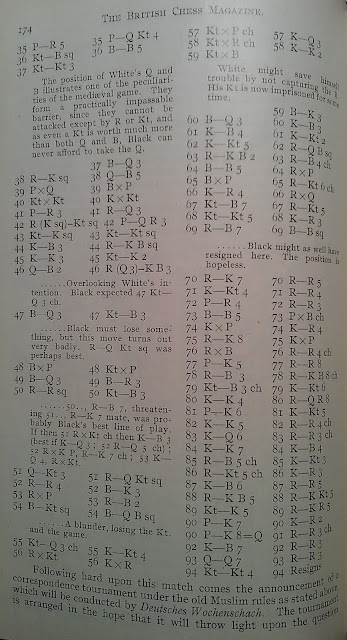 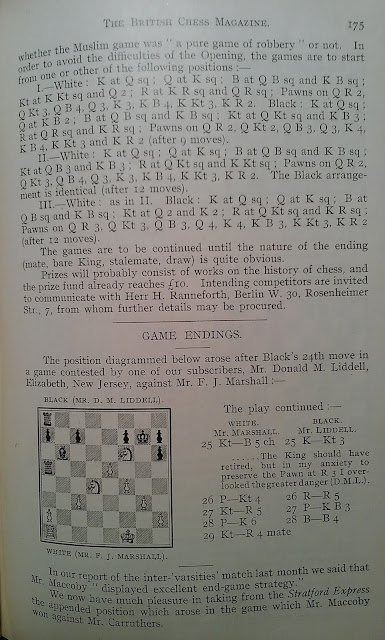