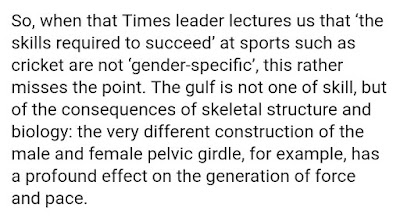 I have no intention of spending any more of my time on this article than I have already: do read it yourselves, if you want to, and marvel at how much why-oh-why journalism can be wrung out of setting yourself up against a straw man (that women's sport is presently as skilful as men's) in which nobody believes. Or shudder with embarrassment at the mindset which finds it necessary to insist how rubbish women are.

Dominic has plenty of form in this respect, of course: talking about teenage girls dressing "as if [they] were on the game", asking a scientist how his scientist wife wanted to spend his money and then claiming that "there is so such thing as sexism in chess". Not really appropriate attitudes for somebody who is President of our chess federation and, in our name, welcomes competitors to the British Chess Championships this week.

But what's that you say, Dom?

Surely not a "feast of wonderful chess", because there's nobody playing who's the chess equivalent of "Usain Bolt, Muhammad Ali, Pele". By Dominic's own arguments, it should be a very small feast indeed.

Or does that just apply to women?
Posted by ejh at 8:00 am