Students of the Chess in Art blogging on this and our previous site (generously name-checked by Rupert) would have recognised many of the images he walked us through on-screen, but it was a real treat to hear from someone who really knew what they were talking about as they did so. He majors on Dutch Art in his art history practice, so it was fascinating to hear his informed view on, for example, on what's at work in Cornelis de Man's crafty piece of 1670 (shown here - ten years ago! - and also discussed here).


Thus: that box under her foot is fully functional, and the embers therein keep her feet cosy. With his intimate knowledge of these matters Rupert indicated that convection up the chimney of the lady's skirts would also keep toasty other parts of her person. He then referred us to the lute (up on the wall to the right), visually rhyming, as it does, with the female form - a dead give away as to what's going on - moreover, to my eye, the instrument also suggests her opponent's eager anticipation of a warm reception (but perhaps, given this was a public lecture, that would have been an indelicacy too far).

In the first half of the talk Rupert introduced the major themes of chess art: social play around the board, amorous engagement across it, death at it, and so on - all with numerous illustrations. In the course of the whistle-stop several CinA images appeared that had not been featured in our own CinA blogging. Especially interesting was this fresco, by one Albertus Pictor in 1480 or so. 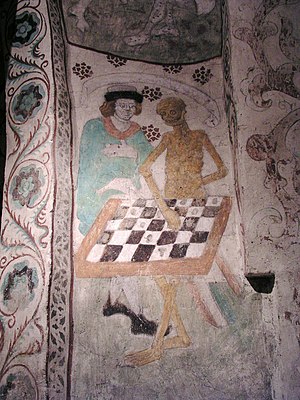 It's on a wall in a church in Sweden, where it has remained unharmed for over 500 years; it inspired Bergman's famous Seventh Seal stand-off, where the Grim Reaper plays a game with the Good Knight. On the same Chess/Death theme is Magritte's 1926 image, showing a rather extreme reaction to the problem of an isolated pawn.


The second part of the talk was devoted to Chess in Conceptual Art, with of course a large slice of Duchamp, who was a good enough player to draw with Frank Marshall, George Koltanowsky and others. After running through some of Duchamp's earlier 'retinal' chess-inflected art, Rupert arrived at the watershed marked by Duchamp's urinal and his 'non-retinal' art, after which Marcel's chess-infused flow continued unabated.

Here Rupert offered some interesting insights into the parallels and interrelations between chess and conceptual art, indeed - in some respects - all types of art. For example, that once created, a work of art, or a game of chess, goes into the public domain, stands alone, and is open then to interpretaton and analysis beyond the author's intentions. Both are rich in possibilities beneath the surface, as it were. Fair enough, though I'm wondering whether we like to think that in chess, analysis should - in principle anyway - be able to arrive at some sort of truth about a game or position (in the sense of a definitive outcome: win, lose, or draw). In art, by contrast, analysis depends on your point of view; there can never be a final outcome, so it is reaction and insight that counts: and yours is as legitimate as mine. Rupert reminded us that this notion is the so-called 'Death of the Author': i.e. that he or she has no special privileges, and is redundant once their work (or their game) is done - maybe that realisation had just dawned on Magritte's suicidal chesser.

There was of course much more in Rupert's exposition, running for only an hour, and it would take a longer post than this to do it anywhere near justice. It was a brilliant piece of work, and a great initiative on his part, and that of the Wallace, to seize the moment.

As for the game depicted in Gérôme's Arnauds tableau used in the Wallace's publicity (discussed here): it's not draughts; it's not chess; surely it is 'Senet' - a kind of Egyptian backgammon. But we'll have to wait to see whether our lobbying of the Wallace at the end of the talk will bear fruit and they amend their caption. The picture is hung down in the armaments section. Watch that space.