Well if we don't include against Judit Polgar obviously 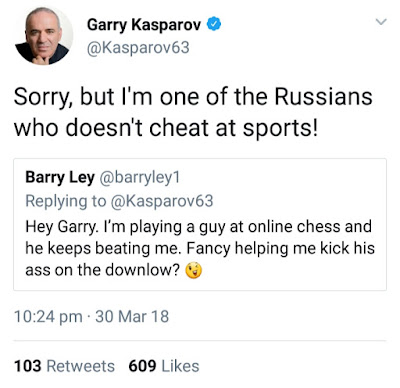 Two of a kind

This pair of jokers eh. 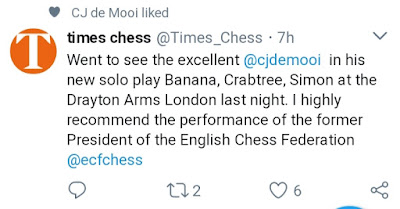 Just to recall that CJ de Mooi resigned from that post (his term having been characterised by a series of scandals) just after having been handed a sum of money to perform his duties abroad, and proceeded to have himself a holiday instead.

Ray of course resigned from the same organisation years ago after being accused of defrauding its members out of a similar sum of money.

Two old frauds. No wonder they get on.
Posted by ejh at 8:00 am No comments:

Well I opened up my nice new copy of New In Chess on the rest day and what should I see but this very interesting piece about something Ilya Merenzon wrote in City AM back in January.

Yes, most interesting it was, particularly the way it mentions Merenzon's use of "unverified polling data" and "unverified medical research", themes that were perhaps just as interesting on the two occasions that the piece has been mentioned on this blog.
Posted by ejh at 8:00 am No comments:

On the usefulness of ratings 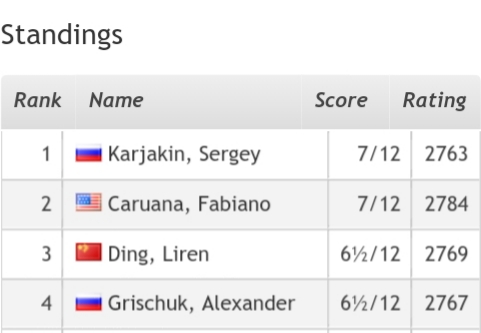 I enjoyed watching two exciting games on Chess24 yesterday, but not half so much as I enjoyed the moment when, frustrated by a persistent screenfreeze, Jan and Peter were forced to get out an actual chess set in order to perform their analysis for their viewers. 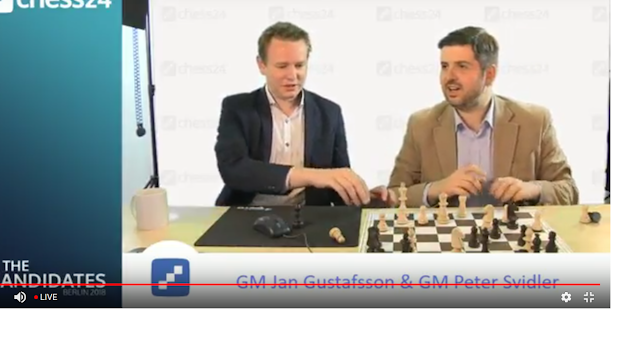 I don't usually get the chance to listen to the commentary (work, or other things to do, or not being on my own) but if they're going to have to do this on a regular basis, with a set and pieces like it was still the Eighties or something 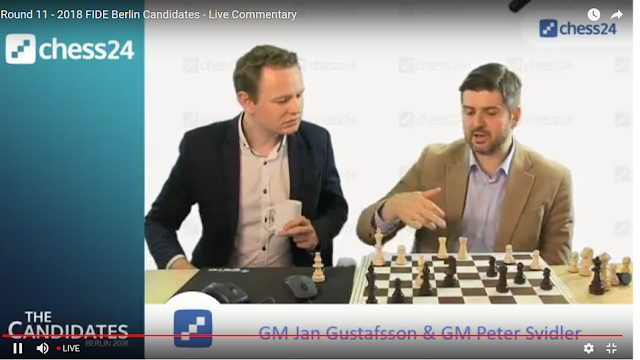 then I reckon I'll make the effort to follow it a little more.
Posted by ejh at 8:00 am 2 comments:

You'd like to think that the merits of a cause could be judged by the quality of the buffoons who support it. It ain't so of course, and there are all kinds of clowns on every side of any given argument, but nevertheless I was pleased to see that FIDE's latest blundering proposal, to bully its members into giving professional incompetents AGON (or anybody else) an illegal monopoly on transmitting chess moves, has been supported by professional buffoon Steve Giddins.

Now, if I were Steve I wouldn't be using the word stolen, for a couple of reasons, one of which is that you can't steal what isn't anybody's property, and there's been enough court cases by now which have established what we already knew, that the moves of chess games are public information in the public domain. You can't steal them.

But there's another reason, which is that you can steal other things, which include the analysis of chess games, and the notes made to them. Or should we say purloin? 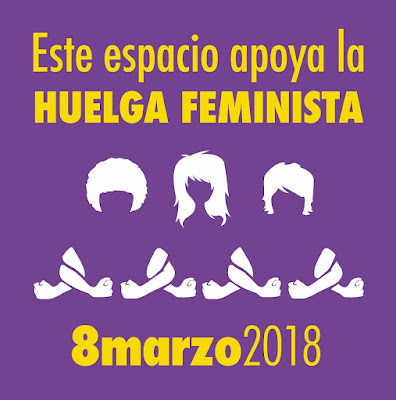 This is International Women's Day, which gives me a good reason to mention some recent research on women in chess that has got a little less publicity than one might have hoped: certainly less publicity than attended Nigel Short's successful efforts to make an arsehole of himself a while ago. That went worldwide: if the research received any wider public circulation than the Yorkshire Post I'm not aware of it. Hey ho.

Anyway, it was recently published in the journal Psychological Science. Here's what it looks like, and as you can see its title is Female Chess Players Outperform Expectations When Playing Men, which is something that should perhaps interest us on principle 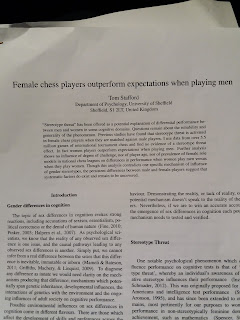 but which is also, apparently, contrary to what some research had previously led people to believe. This is a question of stereotype threat - described in the paper as a situation

whereby an individual's awareness of a negative stereotype influences their performance

which in the particular case we are considered here, would involve women, playing against men and aware that they may be judged, as women, by the results, suffering in their peformance as a result of that awareness.

That is, if I understand it correctly. Don't rely on me - the actual paper is available here. Its author is Dr Tom Stafford of Sheffield University and his conclusion, from analysing the outcomes of a prodigious number of FIDE-rated games, is that not only does the effect appear not to exist in this particular context, but in fact a small effect in the other direction can be noted, that - as the title says - women appear to overperform when playing men.

Another way to put this is that men, considered as a group, may underperform slightly when playing women - to quote the paper again

one plausible mechanism is a degree of male under-performance rather than female overperformance. This coule be due to male underestimation of female opponents, misplaced chivalry or choking due [to] the ego-threat of being beaten by a woman.

Who knows? More research required, as ever. I should say I'm not in a position to judge the merits of the paper, having jacked in mathematics when I was sixteen. (Just on the paper's terminology, I'm not sure that "throw a game" is usually taken to mean what Dr Stafford uses it to mean, and at one point there's a confusion between "game" and "match" that has irritated me before. But these are not important points.)

Anyway, read the paper. (I'd print it out if I were you, it's almost impossible to read on a smartphone.) And after that we might try and put some thought into how we can try and address the absolutely execrable ratio between male and female chessplayers that exists in English chess.
Posted by ejh at 8:00 am 3 comments:

"I played on my own, but I like playing on my own"

From Sid Lowe's account of the kidnap of Quini, the Spanish football legend who died this week.
Posted by ejh at 8:00 am No comments: