But isn't a Greek Gift the bishop sacrifice with check?
Posted by ejh at 8:00 am 5 comments: 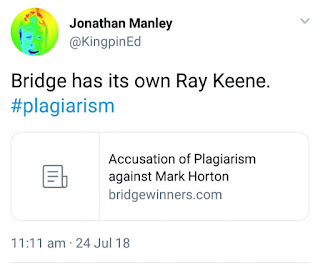 There's a lot to tell, but to cut a longish story short, it turns out that Mark Horton (no relation) who is a long-time bridge professional and journalist, has been padding out his articles for years by borrowing other people's material - some of it from Wikipedia, some of it not - without permission.

Or to cut a shortish story shorter, Mark Horton is a plagiarist. Not, quite, a plagiarist of Ray Keene proportions, but a pretty busy plagiarist nonetheless. Michael Clark, the author of the piece linked to above, has done quite a lot of work collating quite a number of examples, and when you have the time - and you'll want quite a bit of it - I'd recommend checking them out.

But what's this got to do with chess?

Our man used to be a chess player. And a chess author. 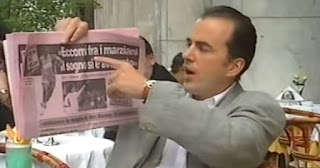 who was the presenter of the popular Channel Four show James Has Breakfast In Italian Cafés And You Don't, officially known as Football Italia. You'll maybe also remember its theme.


James is still commenting on football - and if he is not as prominent as he was twenty-five years ago, then again neither is English chess - and among his current projects is The Totally Football Show, a podcast which has just finished a series of shows discussing the World Cup.

Here's the most recent.


If you listen to it from the start, after just a few seconds you'll hear a voice shouting "Unbelievable! Unbelievable this!" in a way which is reminiscent, to me at least, of the background shouting that accompanied the Football Italia theme. I've only listened to the first and last in the series: but I understand you can hear the same thing on all the shows.

Listen again, and see if you recognise who it is. (But don't take too long, because either you remember this one, or you don't. I didn't.)

Online piece in the Telegraph about the FIDE election. Hurrah! That looks interesting...

...until it turns out to be one of their Premium pieces, which means that unless you're registered it fades out after a couple of paragraphs.

Do you know, I registered just to find out who it was.

And what a disappointment. Unfortunately, although the piece continues

it doesn't actually go so far as to give any specific allegations or name any actual names. No prizes for guessing? No prizes for journalism, either.

Also ongoing over the past few weeks, Nigel's Presidential campaign, for which Nigel uses the Twitter hashtag #cleanhands4fide: Nigel has now been backed by the English Chess Federation...

...and also by your friend and mine, who was last seen, as far as that very same Federation is concerned, resigning after cheating it of a sum of money.

This is support Nigel is very happy to advertise.

I may have said something similar before, but still, what can you do about this kind of shamelessness but point it out? You either cry "clean hands" or you welcome the backing of a professional cheat and a thief.

No woman no try

Well, I seem to have missed most of June - sorry about that. So what's been happening? Mostly this, which story - not so much the Telegraph piece as the story it reports - is causing quite a lot of fuss, and rightly so.

Not everybody is happy about this, as the Telegraph piece makes plain, and why should they be? On the face of it it's exactly the sort of thing that the ECF should be seeking not to do.

Especially when the face of it is Chris Fegan.

Chris Fegan may well have "over 40 years' experience playing and organising chess" but some other people's experience of him is that far from being "welcoming and inclusive" he's a thoroughly unpleasant bully. He's also, quite importantly, an employee of another board member, Malcolm Pein.

So we don't just get two women passed over, for a post you'd expect a woman to head the queue for, in favour of a man, but a man who's beholden to another board member. This is called "jobs for the boys" in more ways that one, and it's the sort of thing which shouldn't be happening.