Last year the BBC ran a TV drama series Life in Squares. It followed, in three episodes, the entangled lives of the Bloomsbury Group - the Bells, the Woolfs, Duncan Grant, Maynard Keynes, and Roger Fry et al. Dorothy Parker - not a member herself, obviously, though she might have gone down well - quipped that they "talked in circles, loved in triangles, lived in squares". 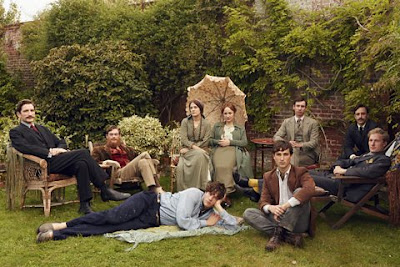 The TV series sparked our own blog series - Played on Squares - in which we tried to answer the straightforward question (one that nobody in the sprawling corpus of Bloomsbury archival analysis, informed commentary, and learned exegesis, had thought to ask), viz: did they play chess?

The answer, we discovered, was an unavoidable "yes". The Bloomsberries admitted to chess in their diaries, and their memoirs; they documented and commented on their obsessive playing of, and sometime brazen cheating at (Roger Fry was exposed as the culprit), our favourite game; one of them (Fry again) used it as a teaching aid in his lessons on aesthetics; two of them were portrayed in oils at the board (and another was sketched in situ), and several of them were photographed in flagrante. One - Leonard Woolf - almost joined a chess club, and another actually did - although this is stretching a point as she was only a Bloomsbury-sibling and not a Bloomsbury-proper. However, as she also played in tournaments and even turned up in the BCM - snapped playing in a simul. against Vera Menchik (result unknown) - she (Marjorie Strachey) was the star turn of our chess-in-Bloomsbury series.

Not that you would have found any of this on the TV. Shocking.

Just after the series closed, our good friend Richard James was kind enough to point out that it was unfinished: there was in fact a Bloomsberry with a well-documented chess interest who we had missed. Also shocking. So, before leaving it any longer, we had better repair this omission and report the chess doings of...

No official announcement yet, but here's an interesting addition to the FIDE Calendar 2017.

Now the thing about Iran is, it does have rules and regulations that apply to women, ones that do not apply in most other countries, and this is, shall we say,  potentially a matter for concern.

Without any official announcement, let alone one touching on the matters this raises, it's hard to say anything definitive, but I sent an email to the FIDE office to see what they could tell me.

Sorry to bother you. I am a chess writer and a member of the English Chess Federation.

I read on your website that the 2017 Women's World Championship has been awarded to Iran (General Assembly decision GA-2016/31). I am writing to enquire whether women competing, reporting, spectating or attending in any other capacity will be required by their hosts, to wear clothing, for instance the headscarf, that they would not be obliged to wear in their home countries.


They replied, very promptly, as they generally do.

From my personal experience, all foreign women are obliged to wear headscarf in all public places in Iran.


You'll perhaps have noticed that while Polina hasn't actually said yes, nor has she said no, and her answer is more along the lines of yes than no. However, I subsequently received an email clarifying that women attending the championship will, indeed, be expected to wear the headscarf whether they like it or not.

all competitors will be obliged to respect the laws of the country including the dress requirements.

You can check the UK foreign office for more information:


Now matters relating to the headscarf are sensitive, as are matters relating to Islam, and for this reason commentors are asked to be thoughtful in what they say on the subject*. But it does seem to me that women should not be obliged to wear the headscarf as a condition of competing in, reporting on or simply attending a chess tournament, and if it is a condition of the host country that this occurs, then it probably shouldn't be the host country.

To say so isn't to lecture another country on what laws or customs it should have. It's to say that the laws and customs of the chess world should not be such as to discriminate against women. FIDE shouldn't be doing this: if and when there's a row, they will only have themselves to blame.

[* additionally - anonymous comments will not be permitted, and please do not make this all about a certain English grandmaster.] 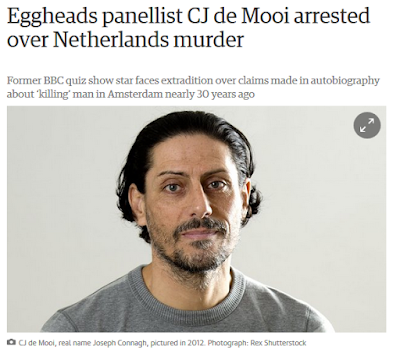 S&B de Mooi index
previously on Lost on Time
Posted by ejh at 8:30 am 7 comments: 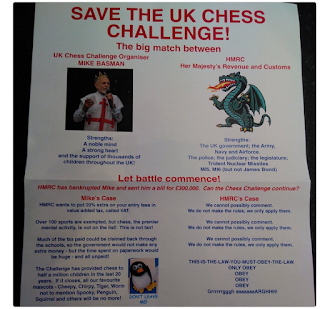 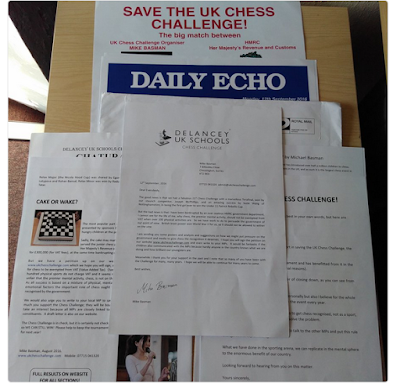 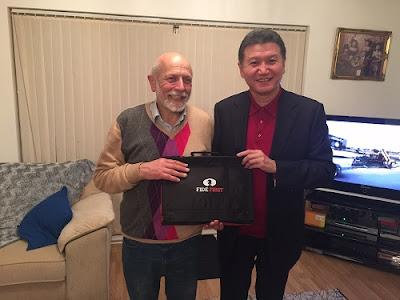 Caption competition waiting to happen
Read more »
Posted by ejh at 8:30 am 7 comments:

[This is a guest post by  Richard James, to whom much thanks. There is a minor edit by MS]


Sitting on the left playing chess is Prince Louis of Condé (1845-1866), who was living in Orleans House, in Richmond on Thames, at the time. He developed TB and died in Australia. He was a paternal grandson of King Louis Philippe via Duke Henri of Aumâle. 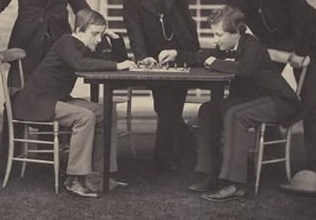 His opponent is Prince Augustus of Saxe-Coburg and Gotha (1845-1907), whose father was a cousin of Queen Victoria and Prince Albert from the Catholic branch of the family. On the maternal side he was a grandson of King Louis Philippe via Princess Clémentine of Orléans.

Watching the game, from left to right:

Prince Pierre, Duke of Penthièvre (1845-1919), a grandson of King Louis Philippe via Prince François of Joinville. Related to the Portuguese royal family and the emperors of Brazil on his mother’s side. “Prince Pierre had a happy childhood as a refugee in England with most of the other members of the House of Orléans, despite the uncertainty of life in exile.” This seems to have been at Claremont, near Esher in Surrey

Prince Philipp of Saxe-Coburg and Gotha (1844-1921), the older brother of Prince Ludwig August (see above). Married his cousin, Princess Louise of the Belgians, who was reported to have played chess against Queen Victoria.

Prince Ferdinand, Duke of Alençon (1844-1910), another grandson of King Louis Philippe via Duke Louis of Nemours.

Prince Gaston Count of Eu (1842-1922), the older brother of Prince Ferdinand (see above). His family fled to England after the overthrow of the monarchy in 1848.

So in this picture we have six French princes, all grandsons of King Louis Philippe of France, who reigned between the July Revolution of 1830 and the February Revolution of 1848. He fled the country under the name of “Mr Smith” [no relation - MS] and sought exile in England, settling at Claremont. It seems likely that this photograph was taken at about the time of the funeral of their aunt Hélène, the widow of the King’s eldest son Ferdinand. She died on 18 May 1858 at her home in Richmond, Camborne House, Petersham Road, close to Richmond Bridge. It was later renamed Northumberland House and demolished in 1969. The funeral took place on Saturday 22 May, the cortège travelling from Richmond to the chapel of St Charles Borromeo in Weybridge. All the Orléans princes were in attendance. At the time four of the princes were living in the area: Prince Louis was living at Orleans House while the Princes Gaston, Ferdinand and Pierre were at Claremont. The Princes Philipp and Augustus were living on the continent, possibly in either Austria or Spain.

So perhaps the most likely location for the photograph is Camborne/Northumberland House.

[With thanks again to Richard James. To follow a French music and chess connection, and notes on many more musical chessers besides, go to his series, starting somewhere else, here.]

Posted by Martin Smith at 8:00 am No comments:

We were talking a few of weeks ago about Chess in Art at this years Royal Academy Summer Exhibition. Well, there wasn't any. Which was a bit disappointing, and makes you wonder whether today's aspiring artists are really trying hard enough. But still, it is probably right that the RA's selection committee shouldn't let in any more arty chess sets - stunning though they might be - especially when modelled on the buildings of the capital: ancient, modern, and ancient-looking-but-built-just-now, stunning though they all may be as well.

You'll remember we saw one such chess set last year...

...and another just five years before that:

So, whatever the seductive materials employed, or the fine craftsmanship at work, enough is enough - especially as complete chess addicts don't have to go the RA to see London skylines. We have them in our own backyard: 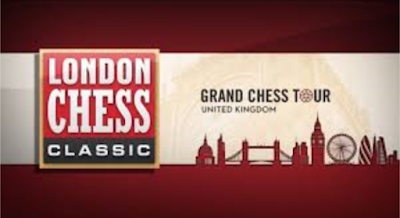 Nonetheless, recent developments in my neck of the woods give cause to revisit all this, and look again at the aesthetics of chess-in-architecture.

How many more times?

Leontxo García has news for us!

Apparently chess has about six hundred million followers around the world.

It doesn't, of course.

This isn't the first time Leontxo's facts and figures have been at variance with reality.

Come to that, it's not the first time Leontxo's put about this particular figure.

Last time he did, and was advised by the present writer that the facts were otherwise, he promised to do some research. 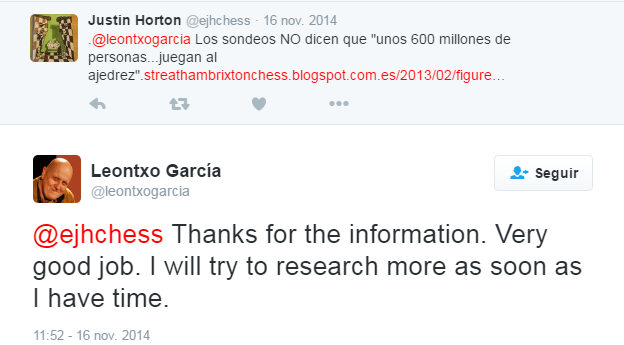 [Oh, and YouGov is not an American company.]

In this appendix to last week's post you are requested to take another look at the ensemble photograph of Germaine Richier's L'Echiquier (Grand) of 1959 (currently on display at Tate Modern), and observe how the Queen (second on the right) is stealing a sideways glance up at the wall. She is flapping her arms to signal her excitement. The Knight takes evasive action. 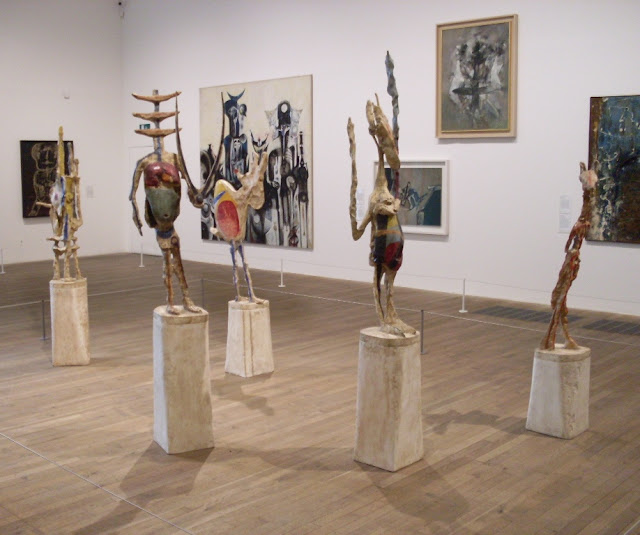 She must have noticed something.