A Surrey state of affairs

To recap: Howard Curtis, a prominent figure in chess for many years, has been convicted on several counts of sexual assault and child cruelty, carried out while he was leader of what the prosecutor described as a "religious cult". The religious organisation, while distancing themselves from their former leader, are not able to say specifically how they have changed since his departure and have refused to say whether anybody inside the organisation had heard anything about his activities prior to his arrest.

YOU: Tell you something, there's been a religious cult involved in Surrey chess for many years. Evangelical sort of thing, does missionary work in Russia.

YOU: Lots of tournaments and matches are held on its premises, adults, juniors, you name it.

FRIEND: Uh-huh. What are they like? Do you get on with them?

YOU: Not always. Matter of fact there's been lots of disputes. They were always threatening other officials with lawsuits and the like.

FRIEND: Well, up to you, but that doesn't sound like the sort of people I'd be happy to work with. Anything happening with them right now?

YOU: Funny you should ask. Their head was arrested for sexual assault. Apparently he'd been spanking female members of his congregation and claiming it would cure their depression. Said they'd consented to it.

FRIEND: Blimey. Did it go to court?

FRIEND: I'm not surprised. What are you going to do about it now?

I don't, I should say, actually know that the answer is "nothing", nor do I have any reason to assume it. Nothing has so far appeared by way of statements on the websites of either the Surrey County Chess Association or the English Chess Federation, but it doesn't follow that nothing will. (For all I know they are waiting for sentencing, which is scheduled for April 22.) I merely say "nothing" because in my view "nothing" would not be an appropriate thing to do.

I don't at all want to get on the back of any of the officials of either organisation, since they're not responsible for the actions of Howard Curtis or for the religious cult he led. I can't imagine that recent events can be anything other than a pain for them. So what follows comes with its own apologies.

Even so, the question needs to be asked. If we said
and at the end of that time
can we expect everybody else to say simply

I think the responsibilities of the chess community might extend a little further than that. And I certainly don't think the important issue is that nobody should associate Howard Curtis with chess

when Howard Curtis was in fact closely associated with chess for a very long time indeed. 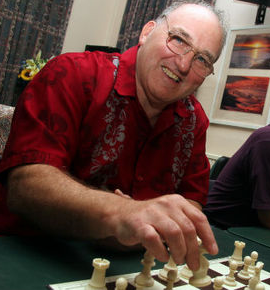 Occasionally over the years I have had cause to repeat the phrase "English chess seems generally incapable of recognising a wrong'un". We've had no shortage of frauds, liars, circus acts and bullshitters in places of prominence and while we are scarcely unique in that, it does call into question, just a little, our capacity for recognising dubious individuals when we're presented with them.

I am not sure that this is a track record which the public should necessarily find impressive - and I am not sure that we are entitled to assume that because the acts for which Howard Curtis is to be sentenced took place away from his chess activities, his conviction is nothing to do with us.

I also think that given the nature of the religious organisation, the cult, that Howard Curtis headed, given that the nature of that organisation facilitated his abuse, there is plainly an obligation on that organisation to demonstrate that it is fit to work with the public, and an obligation on chess bodies to demonstrate that they are satisfied that CCF is a fit organisation to work with. This is an organisation which, at the very least (the alternatives are worse) failed to notice over a period of years that its leader was abusing women and physically assaulting children. This, too, is a track record that does not  inspire confidence.

So, to sum up, I think that SCCA, or the ECF, might like to consider the following course of action:

i) to express concern over the conviction of Howard Curtis and the fact that an individual with potential for abuse worked with juniors for a long time ;
ii) to invite anybody who is concerned about Howard Curtis, for any reason whatsoever, to make contact ;
iii) to review all working relationships with CCF in order to establish whether or not that organisation is one which should be involved in chess.

If this is not a reasonable set of suggestions, I would be glad to be told why.
Posted by ejh at 8:30 am

I'm mostly an outsider with respect to the CCF set-up; I live too far away for it to be my local club. Nevertheless, I have played in, arbited at and organized many chess events there over the years. (Including one official ECF event - the 2015 English Seniors' Championship.)

I cannot say I saw anything suspicious in my time spent there at the chess events, but I mostly would have had no reason to be looking.