Just a short post until we get used to the new arrangements...and I'll lose no time in acknowledging Justin's generosity in allowing me to indulge in the occasional Friday post on Lost On Time.

Back in the other place we spent a good few posts - fruitfully, as I hope you will agree - ruminating on the intriguing chess art of Tom Hackney, inspired as it is by the art and chess of Marcel Duchamp. Often we have had the benefit, and the pleasure, of talking to Tom himself; and we have been tracking his chess-in-art career from the early days in, well, Hackney, via an exhibition in Clerkenwell, and inclusion in the Royal Academy Summer Exhibition of 2012. Most recently he has been showing a wider canvas of works in Munich, Limerick and Vienna. Now he has reached New York, with a solo exhibition of 18 Duchamp chess game paintings at the prestigious Francis Naumann Gallery in New York.

The Francis Naumann Gallery is a temple of Duchampian art, with Mr Naumann himself, eminent gallerist and connoisseur, its benevolent high-priest. You can read the exhibition prospectus here - and Tom's own website carries this: 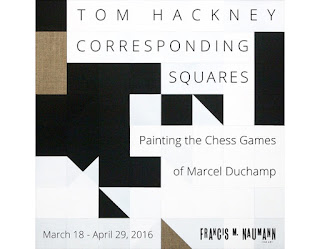 Sadly, we in the UK won't get a chance to see the exhibition - but our readers in the US will have a double opportunity as it will move on to the Saint Louis World Chess Hall of Fame from May 19 to September 11 2016. Back here we will have to make do with the thumbnails given in the list of works online at the Francis Naumann Gallery website. But I would urge our American friends to get along to the shows if they can - there is no substitute for seeing Tom's works (indeed any work of art) in the flesh: the crystalline form, the precision of production, the seduction of surface...and that's without exploring what lies beneath in the conceptual under-storey to the Duchamp chess-game series.

But here at home we can do something else: we can talk directly to the artist himself - so watch out for a further post, with what I hope will be Tom's reflections on his American adventure.