...and discover the same traits in this resolute Edwardian gentleman. 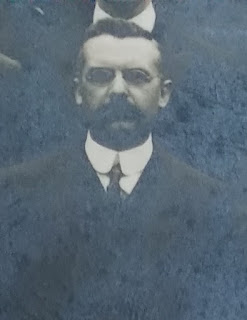 Ernest Montgomerie Jellie (1866-1949), whose story we told here, was the great-grandfather of my chess colleague Andrew Stone. EMJ was a stalwart of Hampstead Chess Club between the wars, and was also active more generally on the English chess scene, as we showed here. He was not a great player, but he was a devoted one; and he appears to have been an enchanting child. 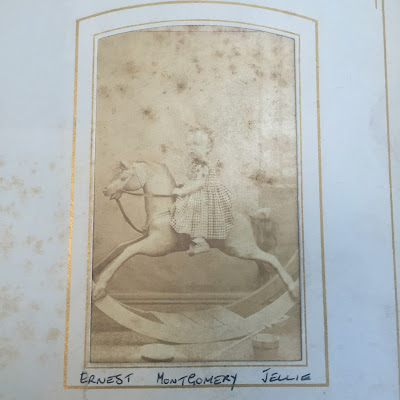 Photo courtesy of the Stone family.

Andrew and family have been generous in sharing their memorabilia with us, and that includes this snap of Ernest's own Aunt Clara mounted upon an improbable "Otto Bicycle". She shows the same implacability as her nephew on his rocking-horse; though she looks a little less secure.

We are a bit off-piste here, chess-wise. Perhaps we are in Peckham, South East London - which is where the inventor of the contraption, Edward Carl Freidrich Otto, lived (see here) in the 1880s around the time that he was promoting his velocipede. He did so with a demonstration to the Board of BSA (better known for its motor-bikes).

Precisely 953 "Otto Bicycles" were manufactured by BSA. Aunt Clara prepares lift-off on the lady's model, which was featured in a lecture at the Royal Institute in 1884 by one Charles Vernon Boys. There were appropriate modifications....

"50-inch wheels are used, and the whole is made lighter; dress guards, etc., are also provided. The Otto is the very beau idéale of a lady’s cycle, safe, handy, and speedy – I [Boys] was about to write 'fast', but that word might be mis-interpreted, as cycling on the Otto is a delightful experience for the fair sex, less showy even that the most demure looking tricycle, whilst no more of the boot tops are showing than in walking." (The Bazaar, February 15, 1882)

Aunt Clara dutifully covered her boot tops, but she was evidently pretty game otherwise: and a good role model for her nephew....
Acknowledgements.
With thanks for the quote, and other details, to Bicycle Design – An illustrated history by Tony Hadland and Hans-Erhard Lessing, MIT Press, 2014; and of course the Stone family.