In the course of yesterday's posting we took a glance at the ECF event calendar which continues to advertise events organised by Coulsdon Chess Fellowship, the chess wing, if you will, of the religious cult whose former leader, Howard Curtis, was recently sent to prison for six years.

As you can see, you're invited to write to a given email address in order to make contact with Scott Freeman.

Indeed it was Scott Freeman, long-time second-in-command to Howard Curtis (and his vocal supporter) who I was hoping to communicate with when I wrote to that same address back in March.

I actually got Rachel Warner instead.

No matter, I guess it's up to CCF who answers their emails, but who's Rachel Warner anyway? I knew she was married to Dominic Warner, who took over as Minister of CCF from Howard Curtis. But I knew little more than that, so I was vaguely under the impression that she might have come to Coulsdon quite recently. Not so: she's one of four Trustees (see People) of the Coulsdon Christian Fellowship Trust, the registered charity which is one of several connected bodies operating here.

and who might that be? Well if you access their Companies House record and look at the document of Incorporation, from 2003, you can see that it was set up by two people, one of them being Howard Curtis and the other being Rachel Elizabeth Burley. 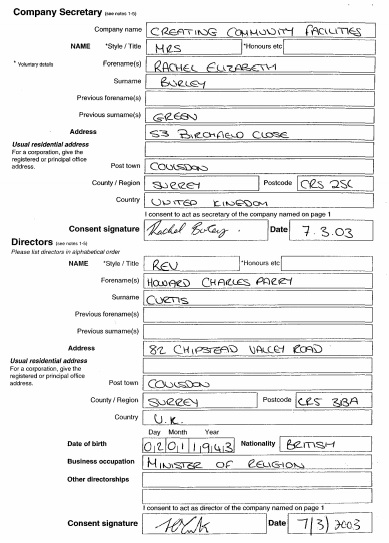 Or, as she is now, Rachel Warner. They have been close colleagues for many years.

Talking as I was of several connected bodies - of the other charity Trustees, one is Rachel Warner's husband and one is her sister, Emma Freeman, who is the wife of Scott Freeman, who I mentioned above.

The disturbing story of Howard Curtis
A correspondence with CCF
A Surrey state of affairs
Six years
A cult and an ultimatum
Should the SCCA play home county matches at Coulsdon?
The ECF and the CCF
Posted by ejh at 8:30 am