Two sets of tosh for you. The first from Erica Buist's less-than-stellar Magnus Carlsen interview in yesterday's Guardian, a piece which for some reason took an early detour via our favourite freak show, informing us:

the meaning of which is obscure to me and may for all I know be obscure to the writer too. If however it means that 35,000 people have been to watch the show since 2008, that's actually quite a poor return for eight years' worth of shows and "worldwide coverage", you'd have thought.

If it doesn't mean that, what does it mean? And where is the figure sourced from - or should I say, from whom?

Back in 2008 Chessbase was trying to tell us that

chessboxing is fast becoming a world-wide phenomenon, overtaking chess in the number of spectators it can attract.

Looks like it's still got some work to do, since the second of our tosh selections (via Christopher Kreuzer) features yet another contribution to the ever-lengthening list of ludicrous exaggerations of the number of chess players in the world.

This one is relatively modest by the standard of the genre 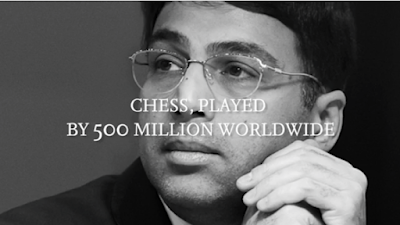 but I guess there's time to add another 100-105 million to the tally before the tournament starts next month.

"FIDE is purchasing a new device, a very modern and a very sophisticated one, which actually identifies everything."

Anti-Cheating head Israel Gelfer. I have no idea what he means.

I must say that while reading that article I also groaned when I saw the mention of chess-boxing. Clutching at straws for content filler there.
--theblueweasel

"FIDE is purchasing a new device, a very modern and a very sophisticated one, which actually identifies everything."

I also liked "sometimes during the game we will check the players". That'll go well.

Don't they already check players during the game based on opponent's complaint? That's what happened in previous cases. Or maybe they have a heat gun like the cycling league to detect motors.
But what are the odds that they "happen" to check the players who are critical of FIDE (like Nigel Short)? Just like the IRS has been weaponized, it's hard to think this will be used properly.

"Despite the drop in chess coverage in mainstream media outlets, the sport has never been more popular. Over 600 million people worldwide play chess and hundreds of thousands of games are played online every day."

Interesting. "Our mandate (Agon) is to boost the popularity of chess around the world."
Nowhere does that appear in the FIDE-Agon contract AFAIK, which is what I would take "mandate" to mean in the context. Or it could be the mandate from the Agon shareholders, namely Merenzon himself. But probably it's just pompous language that's really means that their *goal* is to boost the popularity of chess, and incidentally to make a profit off it.

Hard to see how it could be boosted any further with 600 million people already playing.

600 million people play hundreds of thousands of games every day. Given that I know people who play 100 games a day themselves, it wouldn't surprise me if that means that < 0.01% of "chess players" play chess per day (online). Probably not the next stat that YouGov will publish.

Magnus Carlsen got over 2000 viewers in his fairly impromptu Facebook interview. According to Chess24, this large number is a testament to his popularity.

Nigel Short was boxing as a promo for his rapid Norwegian event. Well, I guess I've seen chess used in other sports, as promos too.

Here's something, Kirsan suddenly knows that only 200 million worldwide played chess in 1995 when he took office.

Growth rate of 100 million per annum for the next 4 years, says Kirsan:

"By 2020 it is planned to reach the number of one billion chess players..."

In fact (B) is so important it's repeated again: FIDE will soon publish the exact venues

In their ever on-the-ball editorship led by D. McClain, worldchess.com has under events:

Strangely, no report on the results has been filed...

But the page does exist!