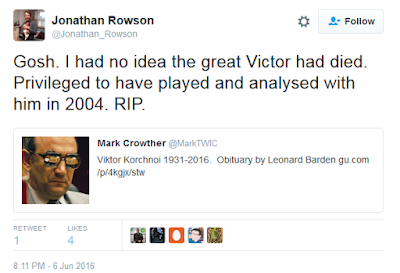 Your first reaction to might be to say how great it must have been, so get so close to one of your childhood heroes. But it doesn't work like that. The very fact of being in the presence of a Korchnoi, in an everyday presence, not someone being whisked out of a limousine or something, but just sat across the way from you in an ordinary room, means you don't think of them like as a hero. The everyday takes over and instead of Viktor Korchnoi, the Great Viktor Korchnoi, you were sitting just across the way from some bloke. Some bloke who happened to be Viktor Korchnoi.

I was thinking about this a few weeks after Korchnoi died, when the Tour de France went mad on the way up Mont Ventoux and Chris Froome found himself running towards the finishing line without a bike to help him.


People trying to get too close to the legends of their sport, and look what happens: chaos, controversy, recriminations. And I just sat in a room and listened while a legend of our sport discussed the game he'd just played with the opponent that he'd beaten. No backstage pass, no blagging my way in. Everybody who was there was supposed to be there, because that's the way it was supposed to be. The only price we pay is that the legend ceases in some way to be a legend. Gods don't come down to Earth. If they ever did, they would cease to be gods.

A price worth paying, if you ask me. I remember - I half-remember - being at the last weekend of the 4NCL, many years ago now, so many that I can't remember either the year of the precise people who were involved. It was at the dull hotel in West Bromwich that used to be the venue, a dull hotel with a duller bar serving beer that was very dull indeed. And then, excitingly, when I turned round there were three players there who, while lacking Viktor Korchnoi's name and history, were world-class players, players in or close to the top ten.

I say "lacking Viktor Korchnoi's name" and it's true, I can't remember exactly which three players they were - while my memory is telling me they might have been Gelfand, Shirov and Morozevich, my common sense is telling me my memory can't be trusted - but they were certainly players of that standard, players of that fame...if fame is really the word, when you can stand next to famous players in an ordinary bar and everything stays ordinary. Just like being in any ordinary pub, with your friends.

Which is where we came back in. 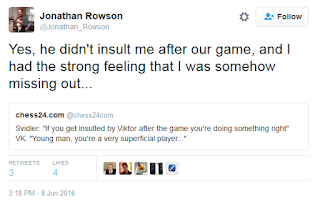 But for all that, he was a man with many friends.
Posted by ejh at 8:30 am

In case it helps, the last weekend of 4NCL was played at West Bromwich in 1997, 2003, 2004 and 2005. Gelfand has never played 4NCL, but you probably did see Shirov, and Morozevich too if it was in 2004. You might also have seen Adams or Sutovsky. If it was in 2005, then no Gelfand or Morozevich, but I remember Adams, Sutovsky, Svidler, Lautier and Bologan among others.

They do somehow seem that less legendary when you see them queueing up to buy coffees during the game, or beers afterwards!