So when you have the Times, for instance, reporting that Nigel "led calls for a change of venue"

Or when a Telegraph writer files a story including this passage 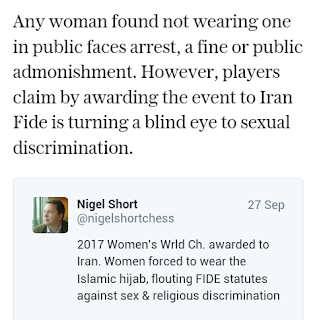 is it too much to ask that they remember this story in the same newspaper only last year? It includes passages like this

about a "feminist lobby" who are "shrill" and "tyrannical".

Not too hard to remember, you'd think. Especially as both pieces were by the same journalist.

To get back to Susan Polgar, heroic speaker of truths:


Some are clearly using this to advance their own personal and political agenda.

So they are, and so are the newspapers concerned, which is OK so long as everybody understands that. Still, that being so, a bit less humbug and outrage all round might be appreciated.

Also - you know, it was only three months ago that Nigel went to Iran to take part in a tournament. I doubt he did this without being paid. He took the trouble when commenting on the tournament to talk (among his numerous complaints) about the hijab and it will not have escaped his notice that it had to be worn. This didn't, however, stop him playing, and I don't suppose it stopped him getting paid.

Shortly after this he went to Baku for the Olympiad where, as we know, there was a big, big ruck over Nigel being searched during a game and which led him to refer to the arbiter concerned as
and, in another interview, produce further commentary of the same kind.


You can actually see why journalists are so keen on Nigel because he doesn't half give a good interview, but he's also something of a bully, isn't he? More than something. He'll dish it out when it's one of the little people on the receiving end, because that's the kind of guy he is.

But at the end of that interview he says, of the chess world, "we're living in a dictatorship" and refers to his "little protest". So I just wondered - when he was playing, profesionally, in Bandar Anzali, in what some people describe, with reason, as a theocratic dictatorship, did he make any little protests against the hijab there?

I'm sure he did. I look forward to reading all about it in New In Chess.

Actually it says "led calls for a change of venue change", which shows approximately how much the Times cared to proofread it. (Moreover, if he would offer an alternative WWC venue (Minsk and Astana have been mentioned previously), FIDE might actually consider it! Other than his stories about Kirsan's Iranian oil deals, I can't imagine FIDE would be disinclined to holding the WWC in a different locale.)

Is the term "headgear" in this context commonplace in UK? Personally, I find it on the derogatory side in word choice.

Or to pick his argument apart a bit more: if there were comparable "Islamic headgear" which men were required to wear in Iran, would it then be OK for FIDE to make the award?

Anyway, he's more interested in complaining about FIDE than about the Iranian government, though the latter is the ultimate source of the compulsion to wear this "symbol of Islamic repression" [of women].

Thanks to both for corrections.

Is this the same Nigel Short who was paid good money to be the coach to the Iranian chess team in 2007?

By Short's logic, should FIDE even allow Iranian Chess Federation as a member, because they force women to wear hijab?

Actually, "Islamic headgear" is a lot more polite than some of what is on Sutovsky's FB page (why does everyone call it "Sutovsky blog", is it something historical?).

Not sure why Sutovsky hasn't cut off the loose-hinged Colm Chess by now (his profile says CIA propaganda analyst BTW). Certainly if it were a different religion, Emil's patience would be significantly less.

Danailov has joined Short in championing women's rights as a side effect of anti-FIDE protest.

Smerdon: At two world junior championships in India in which I competed, both foreign boys and girls felt some cultural pressure to dress to cover our legs; in fact, refusal to do so actually led to the male and female events being segregated into different rooms!

A nice point. In fact, looking at the Chengdu Women's GP closing ceremony, you can see that Harika and Humpy have their legs covered (Harika with a floor-length skirt).

Theoretically (and perhaps only very much so), Iran could have a separate room for women who don't want to wear the hijab during play, with only female arbiters. This wouldn't be more ridiculous than the Lviv 30-minute delay in a private room in the match this last March for instance. I doubt that would solve Ms. Paikidze-Barnes's difficulties, which are more philosophical, and conflict with Iranian tourism in the first place.

Nigel himself had an almost decently-phrased tweet (for once):

#AskYifan @ChessBase Does persisting with a [Women's] World Ch. system that has been tried, tested and rejected in the men's game constitute sexism?

Unfortunately, there is no "men's game" in FIDE, by which I guess he means the open division. Which might be his point in the first place.