Serious injury or death may occur

Further to Sunday's posting concerning Nigel Short's repeated comments to an arbiter that he was lucky not to suffer physical violence at Nigel's hands, my thanks to Sean O'Keefe for drawing my attention to this tweet from September. 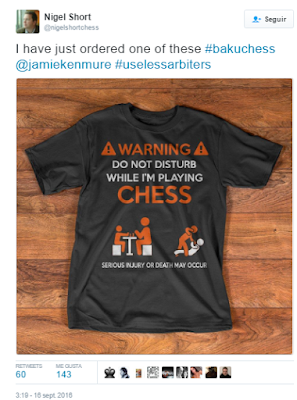 Since Nigel's done this three times now, there's no way this can be explained as simply a joke: it's a deliberate attempt to bully and humiliate an official. And since the Tweet is addressed to his victim, it's the exact equivalent of sending a threatening email at work, a transgression from which you would be lucky to escape without being sacked.

It's abysmal behaviour on Nigel's part.

One good answer to this conduct is this:

but it shouldn't be the only answer. Two other things should happen, neither of which is at all likely to happen.

One is that FIDE should bring a serious disciplinary charge against Nigel.

The other is that Dirk Jan ten Geuzendam should cease to provide a space in his magazine for the egotistical bullying that is Nigel's major behavioural characteristic.
Posted by ejh at 8:30 am

Now he tweets: In play against an absent @lichaochess at the Baku Olympiad, shortly before the arbiter attempted to conduct an electronic search on me.

Yet in the picture, it's White's 8th move (Black pawns on d5 and I think e6), so the use of the word "shortly" leaves a bit to imagine.