I wouldn't mind seeing this film: I've been interested in its subject most of my life. 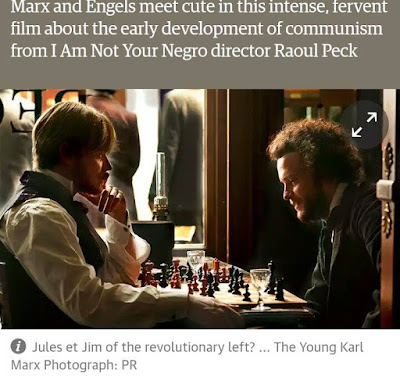 We knew Marx played a little (though I wouldn't be sure we can vouch for the veracity of this game) but what about Fred? Marx surely played with Liebknecht, but that's not Wilhelm in the picture - in either meaning of the term picture, since he's not listed in the cast. Our two chessplayers pictured are clearly August Diehl, playing Marx, and Stefan Konarske (below) who's down as playing Engels. 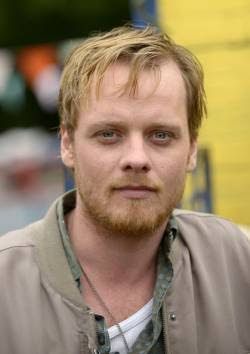 I've never seen Engels' name linked with chess - there was a chessplaying Engels, but a different one - and it's the sort of thing I'd have expected to notice.

Alas, when trying to connect the two briefly yesterday evening, all I could find was a long article from 1890 in which, discussing the opinions of the largely-forgotten David Urquhart, Engels writes thus:


In order thus to reduce all modern history since the French Revolution to a diplomatic game of chess between Russia and Turkey, with the other European States for Russia’s chessmen, Urquhart had to set himself up as a sort of Eastern prophet who taught, instead of simple historic facts, a secret esoteric doctrine in a mysterious hyper-diplomatic language, full of allusions to facts not generally known, but hardly ever plainly stated.

And here's me thinking that clichéd Russia/chess comparisons dated from the period of the Soviet Union (and ever since). Apparently not.

So assuming that the image above is all it seems, is it a little bit of artistic licence on the part of Raoul Peck? Or did Marx struggle over the chessboard with Engels just as he did with Liebknecht? Did Fred play?
Posted by ejh at 8:00 am

Engels' letters to Marx in 1852 include a good deal of gossip about the Russian emigré Edward Pindar, who shortly afterwards became one of the strongest players in England but whose chess career was interrupted by a prison sentence for wounding with intent (see 'The Mystery of Edward Pindar' by Owen Hindle). Engels is disparaging about Pindar's lack of culture but doesn't mention that he was good at chess. Presumably he didn't think this was an accomplishment worth mentioning.

Thanks, that's a useful piece of information.