Now it's not as if it's a question that was never asked during Van Oosterom's lifetime, albeit not generally by the people who should have been asking it. And the proper convention is to not make too much fuss about the misdeeds, either alleged or proven, of the dead, so if Peter Doggers' notice said no more than this


many chess experts have suggested that the retired grandmaster Jeroen Piket, who finished his career to start working for Van Oosterom in Monaco, not only helped his boss in the company

I have no particular objection.

But there is, for all that, the small matter that a couple of world championships were involved, and the larger matter that historical truth is ultmiately important and needs to be established.

Tim and Ian Rogers were kind enough to briefly discuss the matter on my Twitter account last week and the discussion can be followed from here. It isn't entirely linear, so you have to go this way and that to get everything in (similarly, the layout below isn't entirely consecutive) but both had some interesting things to say and these are some of them.

You get the point: at the moment, we don't know. If we did know, we'd be in a position to say well, all this is history now, the main actor has left us, let history judge. But as it stands, we don't have any established history. We have what people have been told by other people and as is often the case where that is the case, we have more than one account.

One is the official account, than Joop van Oosterom was legitimately World Correspondence Chess Champion.

A second is the most familiar account, the one given by Tim Krabbé.

The third is the one given by Ian Rogers above, that Piket worked for van Oosterom legitimately but that the world titles were won for him by two International Masters.

So who did what and who did not? I can understand that anybody involved might not be proud of what they did

but it's not clear to me that that should prevent us from asking. 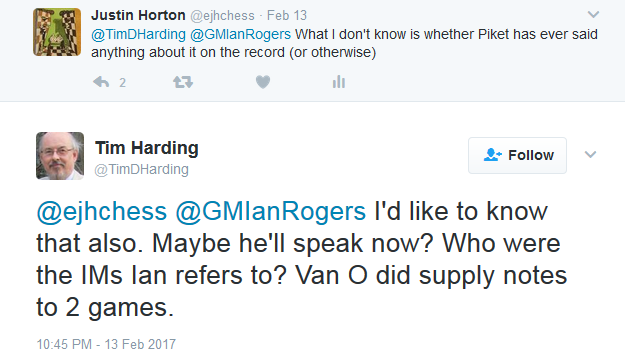 It seems to me that this would be as good a time as any to try.

I've removed an anonymous comment: my apologies to whoever posted, but while in principle it is OK to name names, it is less OK to do so anonymously. If anybody wishes to do so, it would be appreciated if they gave their own name as well.

While you're at it, why not discuss the difference between (1) hiring a titled player and (2) hiring a high performance computer with a state-of-the-art chess engine.

You can confirm the info from paulboers@planet.nl

Mark Weeks makes an interesting point, but it is only a wry one. You are free to use whatever tools you like, a publicly available computer AI, one you wrote yourself, a database, a book - anything goes there. You are not allowed to pay somebody else to make the decision as to where to move. You, as a corr. chess player, must ultimately decide each move to make on the basis of your own research.