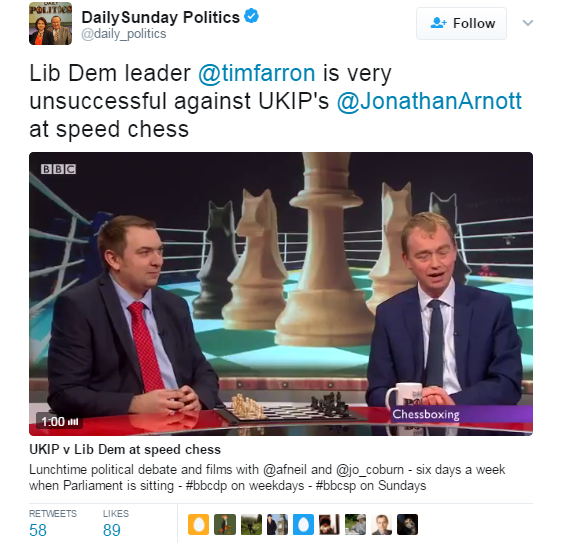 The clowns at London Chessboxing have a show on April 1 which is headed by a bout between Jonathan Arnott, UKIP MEP for the North East of England (and actual county-strength chessplayer) and an opponent described in their literature as "Lib Dem activist Toby White". 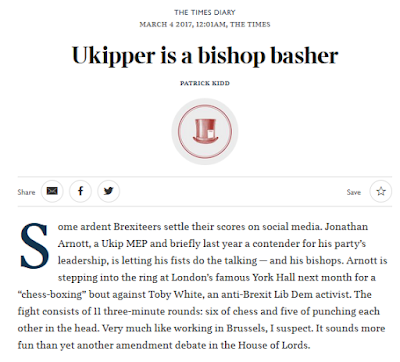 White, they go on to say, "is looking for payback after campaigning unsuccessfully for the Remain campaign last Summer".

What larks. I've always said that chessboxing was a freak show, and freak show is exactly what this is.

Still, it's not even a particularly appetising freak show, and on this occasion less than ever before: the "campaign last Summer" to which London Chessboxing refer was one marked (and won) by an enormous amount of extremely unpleasant racist propoaganda in which leading members of UKIP played a major role. It's no exaggeration to say that the promotion of hatred against foreigners and other people perceived as outsiders is UKIP's sole function in British politics.

This raises the question, as mentioned above, as to why the Liberal Democrats would want to be larking around with these people. You can understand why Sunday Politics might - if it weren't for the BBC, nobody would ever have heard of Nigel Farage - but you would think that a political party which seeks to identify with the European Union in particular and with liberal values in general might take serious things seriously.

It's not the first time recently Tim Farron has blundered the moment he's had anything to do with chess - just last October he was issuing statements in support of long-term tax evader Mike Basman, thus committing the same sin of taking people's press releases on face value that's kept chessboxing going.

For all I know it's just a big April Fools' joke. Whatever kind of joke it is, it's not a very funny one, and only a fool would go along with it.
Posted by ejh at 8:00 am

Well he got knocked out in comical fashion so that was fun.