After the extensive investigation of Herbert Jacobs' political engagement (here and here), the series takes a breather before we look at his legal career. However, before we leave behind the struggle for women's suffrage completely, the cartoon below is worth a look.


There are several things to investigate - so we only need to note, in passing, the satisfactory depiction of the chess board: all 64 squares, all where they should be, though that "umpire" reference sounds a little odd to modern ears, but then maybe arbiters hadn't yet been invented.

So, who was "A Patriot" sheltering behind the nom de plume? And who were Frederick and Emmeline Pethick Lawrence, the editors of "Votes For Women"? And - while we are about it - could Lloyd George really play chess?

Taking the last first. Here is the only reference that I have found to anyone playing chess with Lloyd George:

The caption in the book from which the above comes says that the set was made just after 1917 when America entered the war (hence Woodrow Wilson). It was created by a "portraitist of the German school": Max Nicolaus Neimeier. His allegiance may explain why it is that the white pieces (not shown here) were chosen to represent the various German military and political leaders. From Herr Neimeier's perspective, Lloyd George (a bishop!?) and friends would be thought of as the bad guys of WW1, and thus rendered black. Some over here might have been sympathetic to Herr Neimeier's point of view - maybe even the Pethick Lawrences, who thought all advocates for war misguided, if not downright wrong.

Lloyd George became Prime Minister during the conflict. However, it was in his capacity of Chancellor of the Exchequer back in 1911 that he was widely described (one example is the Aberdeen Press 25 November 1911) as "unscrupulous" and "gloating" when "torpedoing" another Conciliation Bill for a limited female franchise. Lloyd George was of the same persuasion as Joseph Martin, Herbert's Liberal opponent in East St. Pancras (we met him in the last episode): it was better - they said - to deny all women the franchise rather than enable only some to benefit - especially if you presumed that those few would vote for your opponents.

Fred (1871-1961) and Emmeline Pethick Lawrence (1867-1954) - the editors of "Votes for Women" - were a remarkable political couple on the militant wing of the suffrage movement: the WSPU i.e. the Women's Social and Political Union (although they broke with it in 1912). He had used his legal expertise (and money) to assist suffrage campaigners, and to represent them in court (Balshaw (2000)) - did Jacobs do the same, you might ask? Find out next episode.

Both the Pethick Lawrences were imprisoned for conspiracy to damage property in 1912, and force-fed.

He was subsequently bankrupted by court costs and civil suits for reparations. His peers forced him out of the Liberal-leaning Reform Club. The "Peths" had, however, argued within suffragette circles against the violence perpetrated by others. During the First War Emmeline campaigned for peace (predicting a second after the vindictive Treaty of Versailles), and Fred was a conscientious objector. Afterwards they both stood for parliament (she was one of the first women able to do so in 1919). He eventually got a seat for Labour in 1923, defeating Winston Churchill to do it. He served in two Labour Governments, and was made a Peer in 1945 - a moral tale of vindication...(with thanks to June Balshaw's essay detailed in acknowledgements below).

Back to "Votes for Women" and that cartoon. It should be possible to get a clue, or even more, as to who was "A Patriot", from a close reading of the journal itself, but that will have to wait. Instead we will do some sleuthing among the political cartoonists of the day, and my immediate suspicions fall on Bernard Partridge (1861-1945). He is mainly known for his work with Punch, for which he turned out several suffrage-sympathetic and Liberal-critical cartoons, such as these (where I think you can see some stylistic similarity to that employed above with the chess game - maybe).

There are some suggestive circumstantial clues elsewhere pointing to Partridge: his employment (below) of another anthropomorphic roll-up to represent up-coming legislation.... 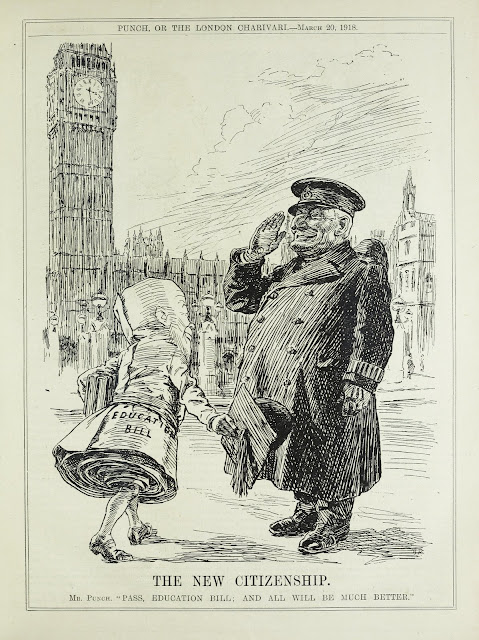 ...and another chess effort. Not an original idea, but it is nicely done. 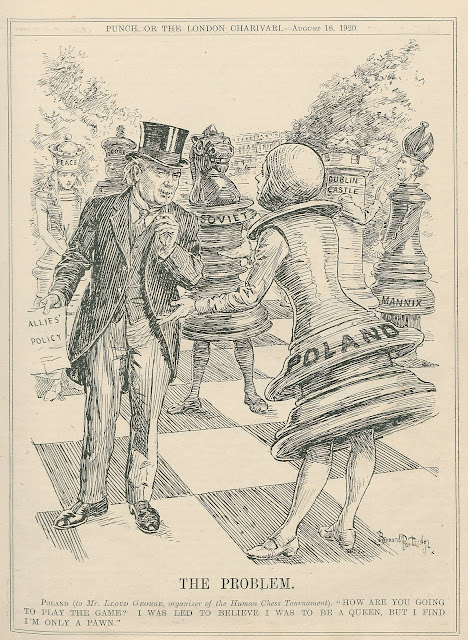 He didn't seem to rely on speech bubbles to give his characters their voice - possibly he thought such a device would interfere with his brilliant draughtsmanship. But anyway, minimal voicing only was needed for this next image from 1919, when the first tranche of women's suffrage was enacted.

Universal suffrage had to wait until 1928, and no doubt Partridge, and many others, thought it should have come earlier. He seemed to have been on the right politically, and there is at least one cartoon by him deploring the window-smashing tactics of the WSPU suffragettes. Whether, though, he really was the artist behind "A Patriot" remains to be established. But if not, who was?

Next time: Jacobs the Brief.

Acknowledgements
With thanks to:
Stan Kenton.
June Balshaw, The Pethick Lawrences and women's suffrage, in Angela V. John and Claire Eustance (eds), The Men's Share? - Masculinities, Male Support and Women's Suffrage in Britain, 1890-1920, Routledge, 1997.
Also to Punch, and the various on-line archives of suffrage and Partridge cartoons, and Spartacus Educational.

A question, or alternate view, stemming from my young son's confusion of chess with race relations. Your phrase, "thought of as the bad guys … thus rendered black" is so widely accepted you are blameless. Following a lengthy explanation for my son, I purchased a fine Red set, and talked about the Wars of the Roses and the Russian Civil War. I hoped to show that colour is simply used to define sides without shades goodness. I maintain that so long as the laws of chess are followed, there is no good or bad side, only the aggressor who moves first opposed by the defender who responds in turn.

Just my part to remove morality plays from the game I enjoy. I was undone by the question of Native Americans facing the mostly white westward expansion, and aftermath. Does any one else see the board oriented with White's side representing the East, moving west?

Having written this out and reflecting, I actually agree with the original point. Germany was certainly the aggressor, therefore the White side.

I'd never before considered the interesting idea that White = East, moving west. However, I've just Googled a Cowboys v Indians set and, guess what, the Cowboys are white.

There was also a Crusaders v Saracens set - the Crusaders invaded from the West. Black or White? Unfortunately they were done in gold and silver, so not much help...

I hope your son is enjoying his chess.

Great! Thanks Gerard. I will be sure to weave that seamlessly into the next episode.