It's my birthday tomorrow, and because I am not just a good guy but generous with it, I am going to give you all a present. Same present for everybody, mind, so you'll have to share, but it's a nice one.

It's a large pgn file of the collected games and annotations of Raymond Keene, all in one place for your comfort and convenience. It stretches from 1961, the first annotated game being an Old Indian Defence against John Sugden from that year, to 1988, the last one being from a little earlier, a King's Indian Attack essayed by Zarb.

I can't actually remember how I came across it first. I thought I had discovered it by accident when, in 2013, I was researching Ray's habits of reproducing his own notes, or other people's, on the sly - Googling a phrase must have produced, among the results, our pgn file. Not so, though, since checking my old emails I find I've been aware of it since 2010 having come across it by chance on this site, maintained by Philip Hughes. The site actually promises us a collection of Ray's games

and though I can't locate it now, it must have been there at some point. Whatever - here it is, and what an invaluable resource it is.

Of course you may have come across some of the material before, and more than once.

It's neither complete, nor definitive: a collection, rather than the collection. It's not the Complete Games of Ray and nor is it the Complete Annotations, for a few reasons, one of which is that each game appears only once, and so where there is more than one set of annotations, only one appears in the file.

For instance, Keene-Timman, Hastings 1974, was annotated in the British Chess Magazine for that year (apologies for the small size) 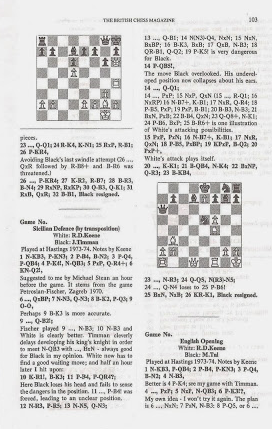 but the notes in the file, which are these, are very different, and appear to derive from Informator 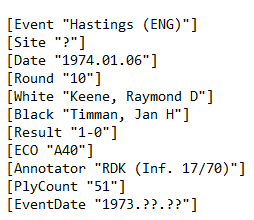 not that I can confirm this personally (I don't have Informator) and not that Chessgames.com tell their readers this.

Indeed it's among the advantages of having this file that you're sometimes given a clue to the origin of notes which you might otherwise think actually originated on Chessgames.com: for instance the annotations to his famous victory over Penrose in 1971 are credited to the British Chess Magazine 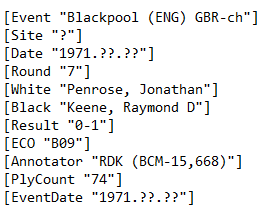 and most of them do in fact appear there.

But in this instance, not all, since (again, apologies for the small size) 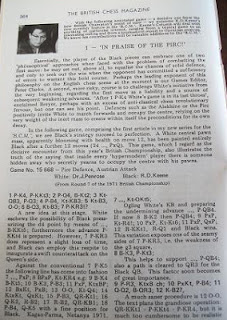 you won't find this section

which appears in most subsequent versions.

And similarly of course, with this set of notes 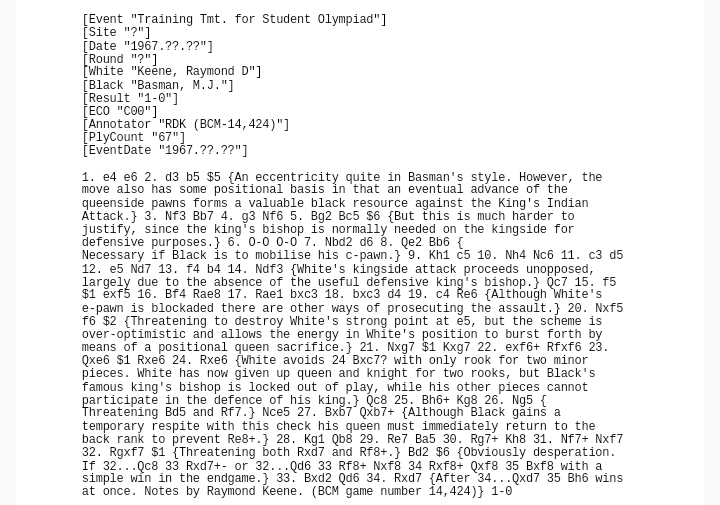 which you no doubt recognise by now, and which, it is suggested, come from the BCM

but wherever they do come from, it's not from there.

Still, these flaws, in so far as they're flaws at all, are of limited importance - it's not a resource for checking up on Ray so much as one for reading him, most of it coming from the days when he was a player and an annotator of some class.