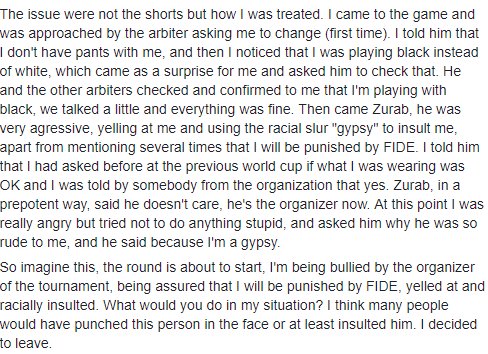 First, don't be this guy.


It would not be clear if it was meant as an insult or even a compliment unless you knew the context.

Dear Mr Buffoon, since the context is an offical yelling at somebody and telling them how out of order they are, what point do you imagine you are making?

Third, if you've dismissed, out of hand, any suggestion that gypsy might be a racist slur, without reading up on it, without asking why it might be considered such - maybe next time do that reading first. Find out. Make the effort. Then you can come to a more-informed conclusion, whatever it may be.

You see, brothers and sisters, it annoys me.

The chess community, in England at any rate, is pretty heavy on old, white men. That's our demographic and it's a demographic I belong to. And whatever faults it has, it's old, it's been around a long time. Time long enough to know better.

All through our lives and before, there's been a public debate about ethnicity and language and about racist insults. We've had a lot of time to learn. And among the things we really ought to have learned in that time are that this matters. You don't just brush it away like it was all a joke or something people made up in order to take offence.

It's not a good look. And it's not good.

So don't do it, because I like this game, and I would prefer to like the community that plays it more than I sometimes do.

Maybe listen to this guy.

And maybe listen to this one too.

That's right. That's absolutely right.
Posted by ejh at 8:00 am

Is it not possible for the English Chess Federation to lodge a protest about this man. Perhaps the FIDE ethics code contains some small hope.

It's also dangerous to base the main point of your story just on one source, in this case the victim's. Azmai's 'because you look like a gypsy' (confirmed by a witness) is not as strong as Kovalyov's version. Azmai also didn't shout. Even though Kovalyov was clearly mistreated, he did exaggerate things.

You have a link for your alternative version?

I don't think "look like a gypsy" is particularly different, by the way.

"It's not a good look". Shorts in a professional event? It staggers me the chap could think for one moment this was acceptable.

As he'd turned up for previous games similarly attired, it shouldn't surprise you at all.

No link but I was there. :-)
And the two phrases might be almost the same, but that's besides the point I wanted to make. Just be careful judging strongly before making sure you heard all sides of the story. Or at least more than one. Even if the other side is a known crook.

Do you suppose if he had opened 1Nf4 in the earlier rounds but it had gone unnoticed/unreported by the opponent that would also have created an acceptable precedent?

The fact Nigel Short has been unusually quiet on this, to me suggests the Canadian's attire was completely unacceptable.


Do you suppose if he had opened 1Nf4 in the earlier rounds but it had gone unnoticed/unreported by the opponent that would also have created an acceptable precedent?

I think you might need a less bizarre comparison.