Let's get the worst out of the way first: a case of mistaken identity. When we followed Howard Staunton to Lincolnshire, he, and that wily draughtsman Robert Martins, were in the generous and congenial company of their host Herbert Ingram. The account of the jaunt to which we referred spoke of Ingram's "baronial hall" as the mis en scene, and carelessly I then illustrated it with a picture of the rather stout Victorian pile Swineshead Hall. It should have been, of course, Swineshead Abbey, as given by John Townsend in his book on Staunton.

Here is one view of the Abbey:


Swineshead Abbey has a longer history - going back to the 12th Century - than the upstart 19th Century Swineshead Hall, and thus a more compelling case to be the "baronial hall" at the disposal of Mr Ingram. Notwithstanding this appellation: Herbert Ingram could not claim title of this country seat by direct line from medieval monk or feudal lord. He was a new-money man making his fortune from the Victorian taste for mass circulation graphic journals.

As we reported last time (following a story as it appeared in the Draughts World in 1903 - probably),  with tact and aplomb Robert Martins relieved Staunton and Ingram of their cash. There is a 21st Century riff on the episode: see this from 2014, concerning a Tory minister, his properties, and his allowances. Like Staunton at the draughts board, he, too, felt obliged to resign when he might have preferred otherwise.

There was another query concerning ex-Cornishman Robert Martins (1822-1904). John Gillbard, in his excellent History of Draughts in Cornwall, says he "went to London in 1835 at the age of 13". Could we help by giving the chapter and verse on this, requested John Townsend in the comments box. Incidentally, students of the English Chess Forum will know from John T's post of March 26 2012 that he has an interest in Martins and his association with Howard Staunton, which he discussed in his book.

Sources on the internet are not definitive about this 1835 assertion, for example another modern-day source - a biographical note by Norrie Reed here (on a site packed full of interesting draughts history) - says "by the time he [Martins] was 13 he was in London". But doesn't give a source or reference.

The ancient, more contemporaneous, texts published at the time of Martin's death are also unclear, but take us in the right direction. The valedictory cutting, below left, from 1904 is silent on the matter. It is pasted into a copy of a 1899 volume on the most recent Wyllie-Martins match (see the left hand page below - all culled from another excellent draughts history site). The cutting has a nice comment on Martins' playing style: it was "...very pleasing, and he never made two moves where one would do." Perhaps that economy and clarity of execution makes him the Capablanca of the draughts board. Another World Chess Champion, Tigran Petrosian, was celebrated for doing exactly the opposite. 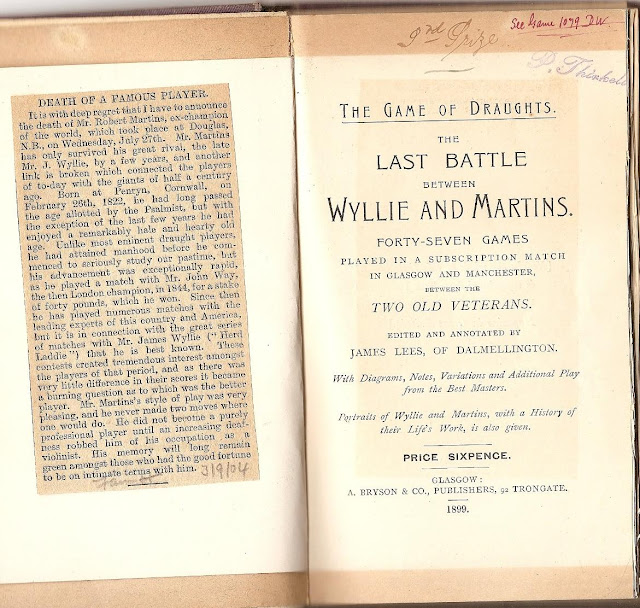 However, the source that we are seeking about Martins coming to London aged 13 (and therefore in 1835) is in the Lees "Last Battle" volume of 1899 itself (frontispiece above right). There is another copy in the British Library - and it has this on page xiv 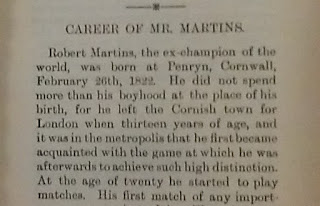 The full excerpt of the book concerning Martins' career is appended, where we can read that Martins
"was a gentleman of kind and genial disposition...was a violin player of repute in his day; he was also well read and a thinker of some depth." The book also gives a fine version of the illustration of the two old veterans in battle.

The final retrospective revision of Streatham Strolls West: Outward concerns Zachy Nicholas's puzzle which he had set in 1890. John Gillbard has amended his assessment of the position and reckons that White can escape with a draw, which presumably is what Zachy himself had in mind (and so he can now stop spinning in his grave). I hope it won't embarrass John - who has been so helpful with these posts - if I show him in a photograph with the winning team in home international competition of 1988 - he is a youthful second from the right, in the front row. 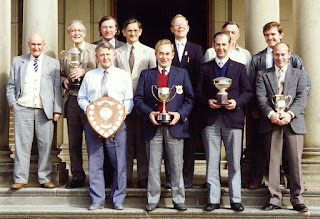 Zachy Nicholas, a pretty decent draughtsman, gave the position from one of his match games against Mr Olds: the contest was conducted in St.Just in Penwith (and thus we get back west to Cornwall). This was the position with Zachy (white) on the ropes, apparently (though that outside passer - as we might say in chess - on square 16 looks pretty handy to me). 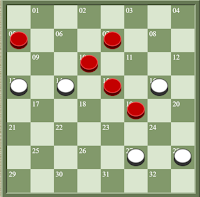 The question is - and here is the puzzle Zachy set his readers - can white (to play) save what, according to Zachy himself, appears to be a lost game. John Gillbard has had a second look since the previous episode and here is the line he gives to save the draw. I still haven't found a satisfactory draughts game animator, so instead I have diagrammed each pair of moves in John's analysis. 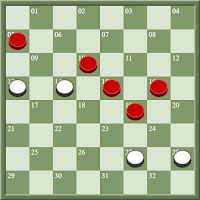 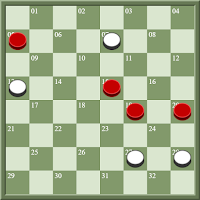 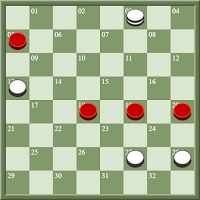 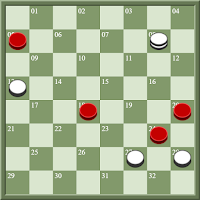 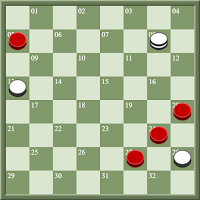 No, I don't understand it, either.

We get back on track in a fortnight's time when we go upcountry to eastern Cornwall, in the hope of a return to the firmer ground of chess.

References
John Gillbard (2015). The History of Draughts in Cornwall.
John Townsend. (2011). Notes on the Life of Howard Staunton.

For all our chess history posts see here and here.

Martin, thank you for another interesting article. Another good picture of Wyllie v. Martins!

You present Staunton as licking his wounds after losing a lot of money at draughts to Martins. My recollection, from research for my Staunton book, is that the main action was between Ingram and Martins, with Staunton either looking on or amusing himself in other ways. None of the accounts I have seen are contemporary, so I don't expect any are very reliable. It is a popular story that Staunton taught Martins to play draughts, but I know of no good evidence for it.

I found an interesting insertion in "Bell's Life in London" (26 November 1848, p. 7), in which Martins sought opponents for matches. He was associated with the Crown Coffee House, 35 Drury Lane. Clearly, he had a draughts reputation by then - in fact, your obituary said he had a match in 1844 - so Ingram should have expected a thrashing at Swineshead.

Many thanks for finding the remark by James Lees that Martins left Cornwall for London at the age of thirteen. That sounds as if it may be right, but, since Lees, writing 64 years later, does not indicate his source for that information, I wouldn't want to rely on it. His father, Robert Martins, was an engineer, and the whole family was in Southwark by 1841. By 1851, Martins was married to "Matilda", aged 23, born at Deptford, whom I would like to identify. He married in 1864 as a widower.

Thanks for your further comment, John, and insights into the goings-on at Swineshead Abbey.
Good luck with your continuing search for "Matilda". I think, after my none too successful encounter with Robert Martins, I shall leave you to it...
Best,
Martin.