The exhibition explores the "surprising" (says the RA) personal and artistic relationship between the two artists during their roughly synchronous lives: Duchamp 1887 to 1968; Dali 1904 to 1989. Duchamp fans won't be disappointed in what they find. I can't speak for Dali fans.


The show includes the whole gamut of keynote Duchampian works from the retinal, and on to the famously "non-retinal". There are his early portraits; the quasi-cubist Chess Players (1911); the Standard Stoppages of 1913-4; the ready-mades (including the notorious urinal of 1917 etc); and his reincarnation as Rrose Sélavy in 1921.

Richard Hamilton's re-creation of the Large Glass of 1923 - "definitively unfinished" said Duchamp - is there, too, as are the rotoreliefs of 1935; and even - having "convinced everyone that he had given up art for chess" (the RA again) - the hush-hush and scandalous Etant Donnés (or some preparations for it, at least) revealed only after his death. According to the RA caption, Dali had contributed to the mise en scene of the Etant Donnés - thus confirming, I suppose, one collaborative artistic moment in their relationship, and that Dali may have been privy to Duchamp's last folly.

Chess - so central to Duchamp's life and work - features throughout the show, and it is a treat to see the Chess Players (1911) over from the Pompidou Centre in Paris (alongside one of two other chess-themed works of the same period). 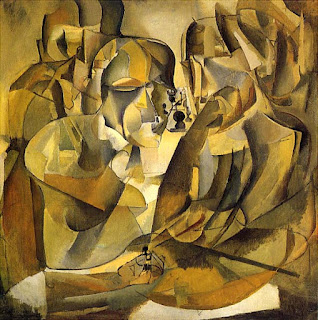 Seeing it for real suggests that the two foreground players are overlooked by two mute alter-egos. It rather chimes with Duchamp's oft-repeated observation - made again in the 90 second clip from Rebel Ready Made of 1966 (in the show, and at 35 minutes here) - that the movement of the pieces (which carry the chess action) means nothing unless you "see" what it signifies chessically. That's where the beauty lies (which makes all chess players artists...or so he said). Those lurking kibitzers seem not to get it - as shadowy doppelgangers they double-take, blankly insensible to the painting of the pieces. Artists they are not.

Dali's chessic contribution to the show is a chess-set of his design.

Symbolic sets of this genre tell you more about the artist who contrived them than the game. Dali could play, of course, and didn't lack of knowledge of the moves per se, but here he seems to stick two fingers up to chess; his attention-seeking pieces thumb their nose at the chess artistry they are privileged to facilitate. The set designed by Duchamp on the other hand (sadly not in the show), pays proper respect to the refined culture of the game.

IMHO, that is. Apologies if my distaste for the artistically over-heated (and politically compromised) Salvador Dali intrudes. Any suggestion of a profound "bromance" (a term used in one review) between Duchamp - reserved, ironic, cerebral - and the histrionic Dali seems to over-egg it rather. No doubt their artistic lives intertwined and they may have been friends, but in spite of some correspondences in output (identified by the curators) it is a struggle to register an affinity of inspiration. As for chess I can't imagine Dali laying a glove on Duchamp at the board. As I see it, the position depicted in the RA poster shows Duchamp far ahead in material, just as he was in artistic authenticity.

Marcel is about to launch a major piece down the file to expose the wreck of Dali's intellectual position.

[For a BBC "Great Lives" episode on Duchamp, broadcast 12/12/2017, with D/D curator Dawn Adès, listen here. For more on Duchamp and the Large Glass see here; and for more on Chess in Art see here and here]