Take a look at this image. When you see it, what do you think? (It's a still from this video, which I saw here. Or see the final photo here.) 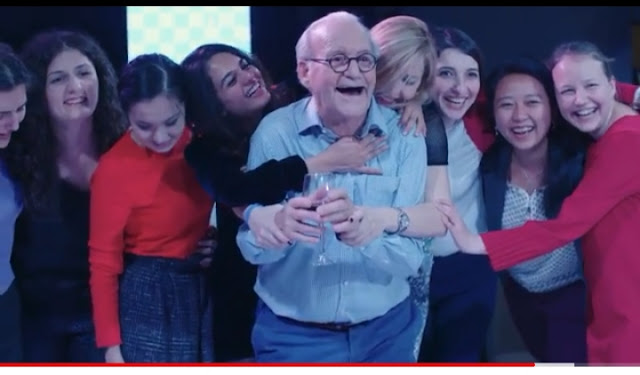 While you're thinking about this, let's talk about Gibraltar, a tournament I'd like to play one day. (I never have, partly because the timing's not convenient for work and partly because though I live in Spain, it's probably easier to get to Gibraltar from any given point in England than it is from my house.) Hell of a good tournament, and also one that makes much of its commitment to women in chess.

That's all good, and more than fair enough, and to the tournament's credit. Now let's go back to our image. An old guy surrounding himself with much younger women.

If you're anything like me, you might think that image wouldn't be happening if he wasn't the guy paying for it to happen.

Your view may differ, but I don't like it much. I also don't much like the tradition of having Miss Gibraltar at the opening ceremony.

I mean either this is a sport and a tournament that respects women, or it is not, and I think we generally understand now that beauty contests aren't about respect for women, are they?

I know, it's not the Presidents Club. But it's tacky, sexist, unnecessary and embarrassing. Darts is doing better. Couldn't chess? Could we really not think about being a little more grown-up?

Well, you really need to know whose idea it was to have the photo, don't you? And they do party/unwind a bit in Gibraltar in the evenings, it seems.

I propose to allow my view to be guided by the Miss Gibraltar tradition, a certain amount of experience and common sense, and perhaps the idea that if you go out of your way to look like a publicity shot for the Benny Hill Show then you can't really complain if that's what people think it looks like.

It doesn't exactly have a Benny Hill feel to me, okay the old guy has a glass of wine and the arms of some women around him, but it doesn't reek of sleaze. Still, it isn't the publicity shot I would have chosen. Rather too faux.

Think this is more reflective of Gibraltar as a place than chess......always thought given the climate it could be as beautiful as California, instead the place is as filthy as London and the people don't seem to care.