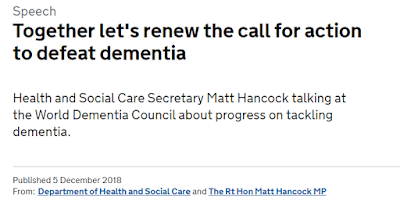 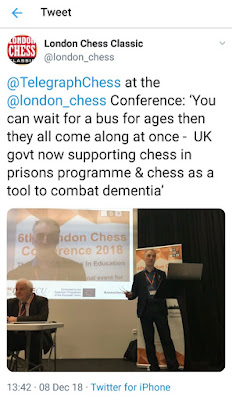 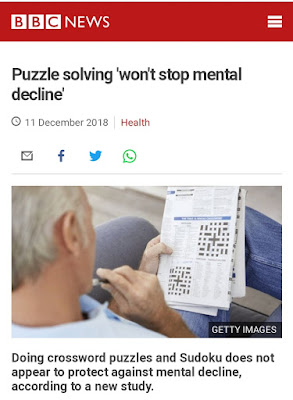 The research, which (as the BBC says) "was undertaken by Dr Roger Staff at Aberdeen Royal Infirmary and the University of Aberdeen", can be read here, and I'd recommend it: among its conclusions is the following

though it does, perhaps importantly, say this:


The results also suggest that investment in problem solving throughout life could enhance cognitive performance, providing an individual with a higher cognitive point from which to decline.

Or why not look at the study's own summary? 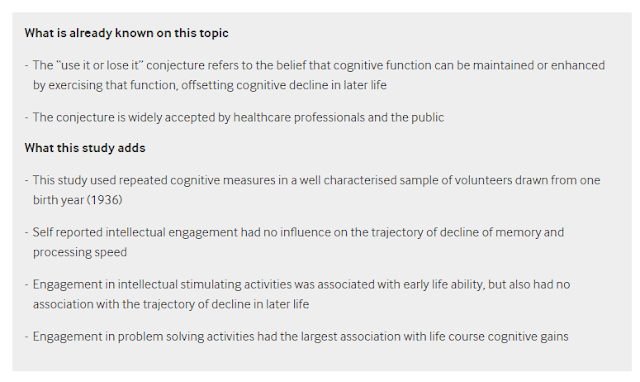 It should be added that the study is not about chess as such, and I don't think any of the participants was a player (though the game is mentioned offhand at the end of the study). So for all we know, chess could have some extraordinary mind-stimulating ability that other brain games lack. But a complete lack is what we have of evidence for that contention, which means that where the


effectiveness of chess in delaying the onset of Alzheimers

is concerned, it stands at nil. Nothing. Nada. No claims to that effect can properly be made. Not by John Foley, not by anybody.

Now I said above that the DHSC press release mentions chess. It says:


In Brighton, the Dementia Action Alliance is partnering with Chess in Schools and Communities to give free chess lessons to older people, helping them keep their minds active while giving them opportunities to socialise.

That's cool as far as it goes, nothing's been said or done that shouldn't. Everything's good. But in fact not everything, because what's this?


Taking part in higher cognitive activities such as chess has been shown to reduce the risk of dementia.

You see what I meant about how as soon as chess and dementia are linked, people start saying things I'm not sure they ought to. In this instance, they definitely shouldn't do: the claim is nonsense, and the people making that claim are the people running the course that's promoted by the DHSC press release.

We're invited, if we wish to have further information, to contact Andrew Wallace, who by chance is the guy making the specious claim above. So I did, or tried to.

Sorry to bother you. My name is Justin Horton and I write about chess on a blog called Lost On Time.

Having seen the Secretary of State's statement yesterday, I came across this quote from yourself:

Taking part in higher cognitive activities such as chess has been shown to reduce the risk of dementia.

I'm aware of no definitive evidence for this claim where chess is concerned - are you able to tell me what was being referred to?

That was on 6 December and I've not received a reply.

Since Chess in Schools and Communities are partners in this project, I'd hope they would have something to say about the irresponsible claims that are being made in connection with it.

I'd also hope the ECF will look twice before carrying further material from John Foley, who for some reason has seen fit to recycle an article from 2015 making a claim that couldn't be justified at the time and can't be justified now.

By all means, let's have chess promoted for old and young alike, I'm all in favour. But let's not have the promotion of chess accompanied by promises we know medical science can't keep.
Posted by ejh at 8:00 am