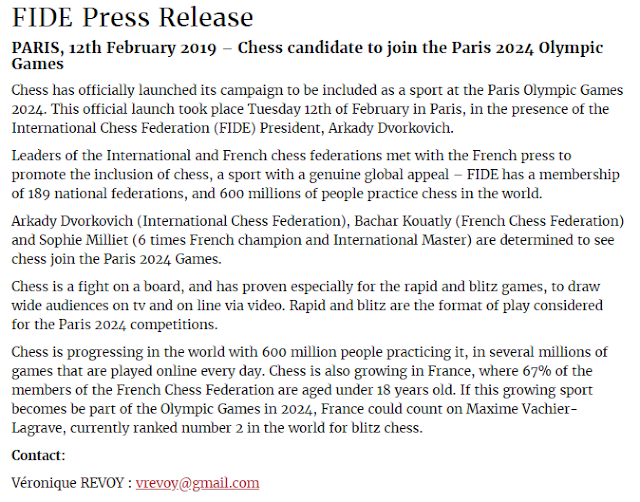 That's from here - a piece which, in my turn, I drew to Mme Revoy's attention. She thanked me and asked me if I had any alternative figure in mind. I said I didn't.

Anyway, I thought nothing more of it until writing the matter up this weekend, when I looked for the press release on the FIDE website. I found it here. Or maybe I didn't, because it's not the same one. Well it is, and it isn't. 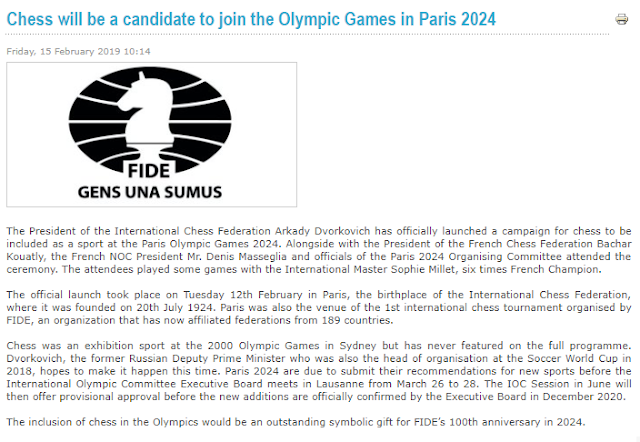 It's dated 15 rather than 12 February, the text is pretty different and most importantly for our purposes, neither reference to 600 million is present. So that's all good.

All good, but odd all the same, since if we Google a phrase from the press release in the Chessbase article - say "are determined to see chess join the Paris 2024 Games" - we get the very press release, on the same FIDE page, that no longer includes the phrase. (Or the claims about 600 million players.)

I'm not particularly bothered by this - I mostly just mention it for the historical record - and more than anything else, I'm pleased that the 600 million number has disappeared.

“Why have you been removed?”

- The place has become sweet. When I arrived, there were debts, the employees were not paid salaries. I immediately laid out one and a half million dollars and made more tournaments. Over these years, I spent about 100 million dollars out of my personal money and money from my friends, the investors who helped me, invested. Now, 600 million people officially play chess - six times more than before. We are recognized by the IOC, we even pass tests for doping.