The population of Spain in 1987 was about 38 million people, roughly two thirds the population of the UK at the same date. So thirteen million people watching a television programme would be like twenty million in the UK: a lot, but it's been done, and bettered, so on principle at least we're not outwith the bounds of possibility.

Now finding out similar information, for Spain, as in the link above, is not so simple: I got as far as a 2008 El País article entitled The Most Watched Programmes In History but frustratingly, there is no text attached to it. (I'll track down a copy if I have to. EDIT 2 May: see comments! - ejh.) Still, after much thrashing around I came across an intriguing if not definitive chart in a book called Fútbol, fenómeno de fenómenos by Francisco Alcaide (Leo, 2009). This chart lists the most-viewed programmes in Spanish history at the time of publication. 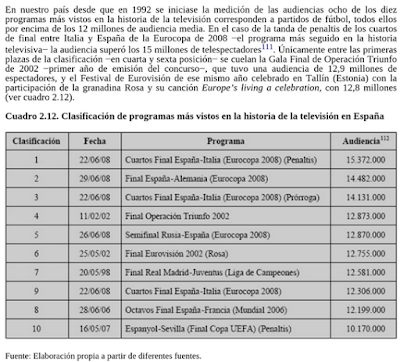 You'll notice that our programme doesn't appear on that chart, but in some ways it's not actually the chart that you need to be looking at: it's the phrase

which means "since audiences in our country were first measured, in 1992". If this is so, it's kind of hard to explain how we could know that thirteen million people watched a sports programme involving chess, five years before they started measuring audiences.

But perhaps they did. Odd, though, to come across this letter in El País, 30 December 1987, bemoaning the coverage devoted, by TVE, to that year's world championship match in Sevilla. The writer complains that

- all the channel offered us was a daily programme of scarcely ten minutes' duration - which was transmitted at...

...round about one in the morning.

No sign there, of these thirteen million viewers and people demanding the tennis be taken off. (And bear in mind that until 1990, in Spain, TVE was all there was.)

Now an awful lot of cobblers gets written in letters to the newspapers and one indignant correspondent is a very long way from proof of a didn't-happen. Still, on the basis of what I have, so far, I don't think I'm unjustified in asking - where do Leontxo and RTVE get their thirteen million from?

1 Or I could have translated it "European Cup", since Barcelona have, since then, won the competition in both past and present form.
Posted by ejh at 8:30 am