The contemporary Irish composer Raymond Deane mentioned the other day, on social media, that he'd updated his website. Taking a look, I was surprised to see him depicted on a chessboard, baton in hand atop a giant knight - though not totally surprised, since I knew he had an interest in the game. 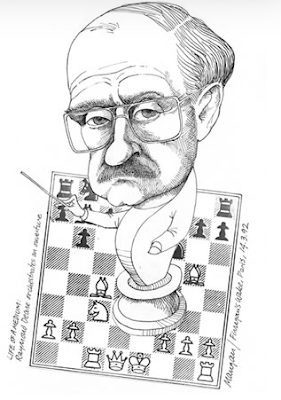 Naturally I assume that readers are squinting at the point to try and work out what's going on with the squares that are obscured. But assuming Raymond is on f3 and noting that the Black dark-squared bishop can't be seen, the kings are uncastled and if there was a pawn on d5 we'd be able to see it, I think you have a decent chance of reconstructing the position. So:

QUESTION ONE: What do you think the correct position is?

While I was writing this entry, Raymond told me that he thought the position was from a well-known game, but he couldn't remember which one. Having worked out what I thought was a likely correct position, I consulted a database (or more accurately, had a friend look at one) and I think I can identify the game in question. (While it's not first-rank famous, it is a game once annotated by Irving Chernev.) So:

QUESTION TWO: From what game do you think the position is taken?

No doubt somebody with (or without) the help of a database will post the answers in comments, but see if you can guess them without looking. Answers later this week.


[Thanks to Raymond]
[Thanks also to Angus]
[Also potentially of interest]
Posted by ejh at 8:30 am

The Chernev reference is spot on - I had given my regular chess opponent at the time a copy of Chernev's "Logical Chess".

It's definitely from Logical Chess Move by Move. Chernev describes it as a model game.

That's more like it. Let's have more fun stuff. Like more worst moves on the board etc.