In the meantime, a couple of loose ends - tying one up, leaving another. I don't know if you remember this from a few weeks ago, the contents page from Luis Bernal's The Berlin Defence Unraveled, a viewing of which - online at any rate - caused me to remark unfavourably on the general standard of proofreading where New In Chess books are concerned.

Give them credit - I thought - no sooner had I made that observation than the publisher put right the error and replaced the errant rooks with the correct bishop symbols.

Well they did on the sample pages anyway. But, as Roger suggested, not in the book itself, of which I've recently been sent an image of the contents page. 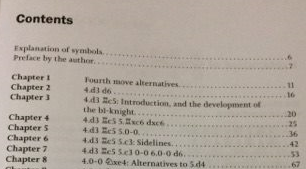 So I wondered - what's the point? I mean at least with the uncorrected version people knew what they were getting. It's only a small thing, rook symbols instead of bishops, it's not likely to stop me buying it, though it doesn't inspire confidence in the rest of the book. But why advertise to people that they'll get something correct when you know they'll get something erroneous? (Amazon Look Inside, for the record, still has the rooks.)

The other thing I wanted to mention was concerned with John Naughton's review of Garry Kasparov's book, which I took to task for using match instead of game, an error I do not think would get through in an item about tennis. (There's been a spate of this particular mistake: see also the Washington Post and the New Yorker.)

But there was something else that was bothering me about Naughton's piece, albeit quite likely something I'm missing rather than he is. He writes: 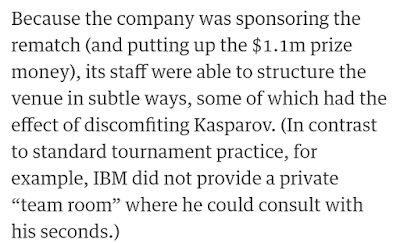 What, in "standard tournament tournament practice", is this private team room for consulation with one's seconds? I've never heard of such a thing. On the other hand, I've not read Kasparov's book and my memories of the 1997 match are less than perfect, so I guess Naughton may be thinking of something specific to that match, or the negotiations leading up to it.

But can anybody tell me what?

The Forward Chess app has an electronic sample of The Berlin Defence Unraveled - and the contents page errors still exist in that.

Regarding the "room" comment, it was normal practice in a Match rather than a tournament to provide a room to which a player could retreat during play. Those with memories going back that far may recall the acrimonious events in Belgrade during the Spassky-Korchnoi Candidates Final of 1977. Equally you might expect a "team room" probably at their accommodation where discussion and preparation could take place outside of the playing sessions.

The author may have conflated the two.

As Deep Blue would not be disturbed if Kasparov were to eat and drink during play, a separate retreat room may have been considered unnecessary. But that's speculation.