It's my favourite sporting event ever, the 1978 match. Not just my favourite chess match, my favourite anything match, and I'd like a film about it to live up to that status.

You can't judge a film by its trailer, but my impression is that I'm liable to be disappointed, and to explain why, I want to make reference to a book I like, which is Edmonds and Eidinow's Bobby Fischer Goes to War (Faber & Faber, 2004). 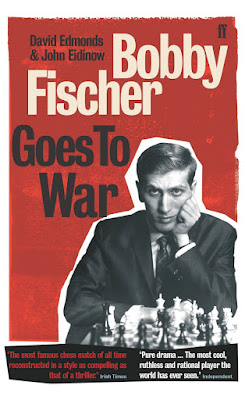 You might say that you know more, after reading a good book, than you did before you read it, and that's true of Edmonds and Eidinow. But it's also the case that a good book leaves you knowing less, that what you thought you knew turns out not to be so simple, and that's what I liked about it most. Fischer v Spassky has been sold to us as the one-man band against the system, the lone genius against the Soviet system: and truth by told, that's part of the story, that's a theme you couldn't properly leave out.

But Edmonds and Eidinow write such that your sympathies aren't divided quite so unequally by the end. By then you probably like Fischer less than Spassky, and more to the point you probably like Fischer's entourage a good deal less than you like Spassky's, never mind the political systems behind them. It's not the story you expected, but it's a truer one, and a more detailed one, and it doesn't stop you thinking that Fischer was a lone genius against the Soviet system nonetheless.

Of course when I say "you" I mean the general reading public, since if you're a chessplayer, you might well already have a more nuanced and complex view of that match than other people. But it's that public, as well as chessplayers like us, which was well-served by the Edmonds/Eidinow book.

Will the cinema-going public be equally well-served by Closing Gambit?

You'd hope so, but my hopes that we'll get away from Goodies v Baddies come up very quickly against the film's rather discouraging subtitle. 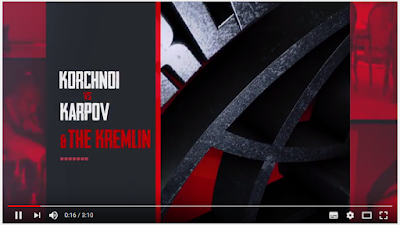 All right, as a title Bobby Fischer Goes To War isn't all that subtle, nor, ultimately, all that revealng or representative of the book, but Karpov And The Kremlin isn't really how I'd like the match to be approached, even though you wouldn't for a minute think about the match without considering its politics. Maybe they deconstruct that picture before putting it back together again, who knows. But if all I have to go by is the trailer and the title, it's their trailer and their title. So that's how they want me to see it.

I know already that Korchnoi was a dissident in exile, that he'd called Karpov "the jailer of my family", that his son was in prison for refusing military service, all the rest of it. What I want to know is - what else was the match about? What can you tell me that I didn't know already? And what did it all look like from the other side of the fence?

I counteeed sixteen grandmasters in the trailer, six of them English, one French, one Czech, one Indian, one Bulgarian. The rest were all born in the old Soviet Union - four of them left its territory to live elsewhere - leaving just Peter Svidler, whose views I won't presume to know, and Karpov himself. All of these people will surely have interesting and useful observations to make about the match, but as a way of getting inside the other camp, it's not an obviously promising approach. Is everybody who assisted Karpov in 1978 dead, save the man himself? Maybe they are - Baturinsky's been gone for a decade and a half - but they'd surely be the ones who can tell us something that we haven't heard before. 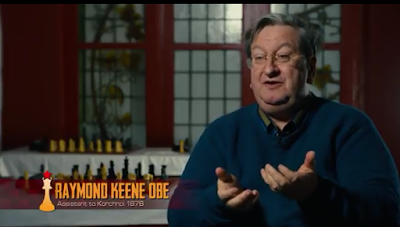 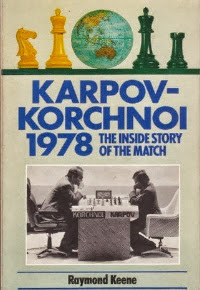 and indeed it's not necessarily an exaggeration to say that the story of the match as we know it is largely the story as Ray chose to tell it. But for a second thing, there's quite a lot Ray doesn't tell us, including some bad things about Ray.

Still, we're promised that the story of the match


has never been fully told until now

so presumably we'll be hearing it all when the film is prremiered in March.

I hope so. But I'm not as optimistic as I'd like to be.

It really was a great, great match. And it deserves a great documentary to go with it: and that'd have to be one that doesn't tell us the story we already heard, and one that leaves out the clichés we already know. 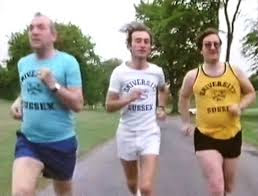 This image isn't necessary to the piece but it's always popular

Also, what kind of title is Closing Gambit?

A film by Alan M Byron.

I can't help wondering..is it really coincidence that your favourite anything match involves your nemesis Sr Pingüino fairly prominently? Or is that where the feud began? Is that the one he was a second but got drunk and wrote a book instead?

It probably makes a difference that I was thirteen at the time, and events at that age leave a sizeable imprint. But even objectively, I think it was an extraordinary match.