Jon Manley has something that raised an eyebrow, from Inside Chess in 1991. 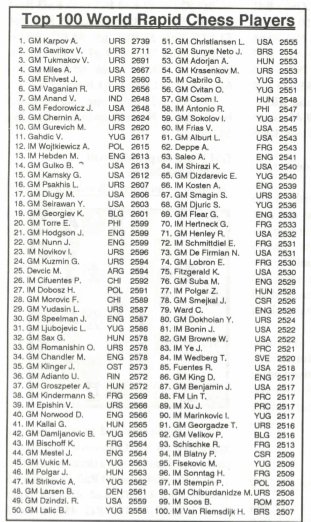 Actually there's a fair few eyebrows you could let loose on this one, not least the ones that ask "where's Kasparov?", but I found myself looking less for the absences and more at the presences, of which there were a lot bearing the letters ENG, not least Mark Hebden at an intriguingly high world number thirteen. (Miles, at four, was in his USA-representing period.)

After him in the top fifty come Hodgson, Nunn, Speelman, Chandler, Norwood and Mestel. And then, in the right-hand column, the first English player to appear is....

Rings no bells with me, and I was an active player in 1991. Not the most active, and certainly not the most observant member of the English chess scene, but even so if there were an English player rated over 2500 I'd expect to have heard of them

For a moment I thought it might be a mangled version of Tony Kosten, but the real version is there, just below, at sixty-six.

Presumably something has been mangled, and either the Saleo is wrong or the ENG is wrong or both. But what's the correct version?
Posted by ejh at 8:00 am

There is an A. Salem who took part in the 1991 British Championships at Eastbourne.

That seems more than plausible. So who were they, and where did they go?

https://ratings.fide.com/card.phtml?event=403890 is presumably the player in question.

I think there was an A Salem from Egypt who played for Streatham & Brixton CC in about 1990. The person I'm thinking of was recruited to S&BCC by Daniel Feinstein and was quite possibly a mate of Andy (Horton-)Kitchlew's.

Yep, regular on the London tournament circuit in the 90s.

Yes, I remember him as a bit of a coffee-house player who excelled at rapid chess, and who frequently played titled players for money at blitz between rounds at tournaments. He used to play Nf6-g8-f6-g8 etc as opening moves to lure unwary opponents into overreaching at blitz.

I recall he had a physically-imposing acquaintance who played in a similar stye - we dubbed him The Stormtrooper owing to his army boots and military trousers.