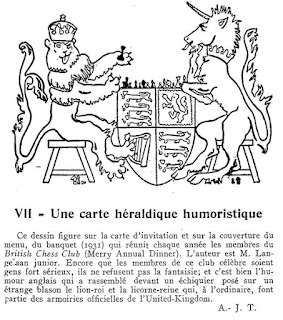 These revelations come about as a consequence of information generously shared by a descendant of the Wechsler family. Our correspondent is Tony Wechsler, who is alive and very much kicking, and living in Hampshire. This is not the first time in the course of our chess-history blogging that help has come from a willing family member; and it is a great pleasure when, out of the blue, someone drops in via the comments box, or by email, to enrich - and/or correct - one of these chess-history excavations (remember Diane Earle re Vavasour Earle; Carolyn Mota re Samuel Tinsley;  Nigel Guess re Carus Colliver; not to mention others in the Chess in Art department e.g. here and here).

We'll start with Tony's grandfather: Dr Marcus Wechsler who, born in 1875 in Russia, arrived on these shores at the turn of the century, and was naturalised in 1907. As was mentioned last time, he was an analytical chemist who patented certain caramelisation processes helpful to the brewing industry.

Dr. Marcus Wechsler, who died in 1942 aged 67, had married Goldina, and she is mentioned in the 1911 census as working in the drapery sector as a 'corsetière' - a detail of some relevance later, as unlikely as it may seem. In 1911 they already had two sons, Theodore Magnus and Isidore Hyam, aged five and two respectively. Theodore Magnus was, twenty years later, to be Tony's father.

Some rifling through the Surrey County Association match books shows that Dr. Marcus was a regular for Kent County, playing for them (against Surrey) from 1928 through to 1938, anywhere from board 30 to board 40. His two sons showed early chess-talent, which they must have acquired from him, and were soon playing in junior championships, before moving on to club, county and competition chess.

It was in these early chess-playing years, from around 1925/6, that the initial confusion over 'I.H' and 'J.H.' Wechsler arrived, as we explored at great length a year ago, without settling on at a satisfactory solution. Were they the same person, and if so, how?

Tony explains it all. It is really quite simple: Isidore didn't like that name and, after some experimentation, he settled on 'Jumbo'. We know it today as a name associated with an unfortunate African elephant which, after capture, came via Paris to London zoo and into popular affection. Jumbo the Elephant was sold to Barnum's circus in the 1860s in spite of a public outcry and the petitioning of Queen Victoria. In 1885, in Canada, it was accidently killed by a freight train. However, 'Jumbo' has become notorious as a playground nickname, often - in my experience anyway - unkindly inflicted, in a Bunteresque manner, on boys too unskilled, or (more unkindly still) clumsy, to make even the school 3rd XI (as if that were a worthy goal). It's not really very nice. Nonetheless, he wore the name with pride.
Isidore looks like an aimable, and pretty laid back, sort of chap. He must have been blessed with a rare self-deprecating humour to adopt 'Jumbo' as his preferred name, suggesting that he felt comfortable in his own skin. Tony Wechsler explains that there was, in fact, a sporting and positive role-model for him in the late 1920s and 30s: Hugh 'Jumbo' Edwards, an Oxford and Olympic oarsman - pictures of whom show to have been somewhat full in girth, though not so much so as to stand out in a crowd, or rock a boat, as a consequence.

To confuse the matter of the initials still further, there also appeared an 'A.Wechsler' in the chess record: but whenever he did (for example the Kent county team in 1926) it was probably Isidore on the horns of a dilemma of appellation, unable to settle on his moniker. Once, though, his mind was made up it was to be 'Jumbo' - J.H. - Wechsler: as it was in Paris back in 1929 (reported in Le Salut Public 14 March 1929). 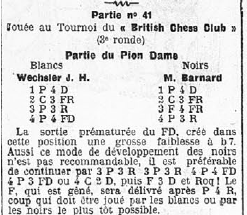 How then was it that - at the age of 21 - Jumbo was in Paris at all? Tony explains that Isidore/Jumbo had not had the opportunity of a university education, as had his brother Theodore (known in the family as Magnus), so Goldina (the first female lingerie buyer for Debenham and Freebody's department store) arranged for him to visit Paris - for work experience, and perhaps to broaden his mind. He was there for a sufficient period of time to fit in some chess hustling for extra cash - in a park (so he told his nephew), which suggests the Jardin du Luxembourg, the popular open-air chess venue in Paris.

In the 1930s - as the storm clouds gathered in Germany - the family, now three generations of it, took several holidays in Knokke Zoute on the Belgian coast (where there was a casino, of particular interest to Magnus) as this wonderful photograph shows. For one such trip Magnus, his wife and son Tony, took the cross-channel flight from Croydon aerodrome: quite an adventure in those early days of air travel with the pilot navigating by map-on-knee. 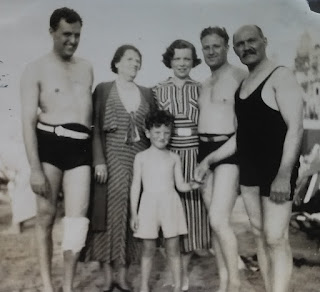 In the conflict itself Theodore Magnus served in North Africa and Sicily: to be awarded the MBE. He played at Hastings just a couple of times post war...

....before his political activities (detailed last episode), and his legal practice, consumed his attention.

After domestic upheavals, and retirement from the political scene in the early 1950s, Theodore Marcus eventually became a Buddhist, and went on to help Tibetan refugees. His address on his death in 1987 was that of the Buddhist Monastery at Eskdalemuir in Scotland.

Jumbo played no more competitive chess after the war, worked for a firm of chartered surveyors, and remained a great sports enthusiast. He died in 1991.

So, the I.H./J.H. riddle is solved, and many thanks again to Tony Wechsler for these fascinating additions to the Wechsler (and BCCP) story. Sadly, neither his grandfather, father, nor uncle taught Tony the game; however he seems to share other interests with both father Magnus (a gambler, both at the tables and in life), and uncle Jumbo (the sports lover). Thus Tony goes for it in his own sporting way: on the race track. With others he buys the odd horse, one of which, Phoenix of Spain, did rather well in the 4.05 at Doncaster back on 27th October. Could be a good tip for next season.

As a footnote to what surely must be the final episode of this series, an update on D.J.Collins, who played a large part in the life of the BCCP. We wondered in an earlier episode if he was the same D.J.Collins who was active in Harrow CC post war. This now seems even more likely as Tony Fulton (to whom, thanks) of Middlesex CCA has confirmed that a D.J.Collins played 33 times for Middlesex between 1952 and 1963.